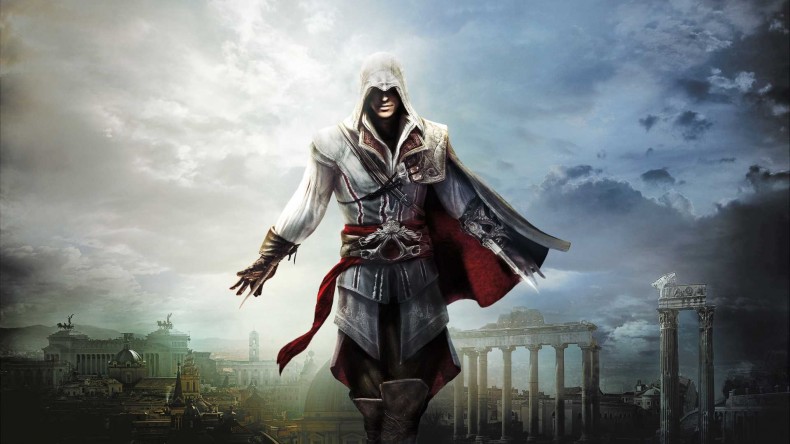 You have to wonder sometimes if developers just have too much time on their hands. Maybe Ubisoft are simply trying to keep the dream alive until the next full-bodied Assassin’s Creed is ready, or maybe they’re just trying to shift a few units while everyone is talking about Michael Fassbender’s upcoming adaptation. Either way, it’s probably not hugely unfair to say that the remaster of the Ezio Trilogy feels a bit, well, pointless.

Now, arguably, these are the most popular titles in the franchise. I personally favour Black Flag and Syndicate over the rest of the series, but I have always had a soft spot for Ezio Auditore de Firenze and his roguish Italian charm. Assassin’s Creed II will always be remembered as the game when I really took notice of Ubisoft, as it was the first time I’d ever seen a developer really pay attention to what the players said and improve a sequel accordingly. Well now they’ve packaged ACII, Brotherhood and Revelations together in one collection and let them loose on PS4 and Xbox One, and the result, to coin a cliché, is a bit of a mixed bag. I didn’t want to be that guy, but that ship has already sailed, so I’ll say fairly candidly here that playing through Assassin’s Creed II again now, even with “enhanced visuals”, is not all that much fun. It’s glitchy, the collision detection is atrocious, Ezio likes to spoon off to the left when I try to climb a shoulder-high wall; the combat feels incredibly repetitive, and you can’t skip the interminable cutscenes. Don’t get me wrong, I loved this game when it was released, and I love the memory of it, but I’d sooner it had remained a memory.

The plot is well-acted, the story compelling and the setting wonderfully realised, but it feels slow and imprecise, and no amount of re-skinning will change that. There’s also a new issue where the contrast is so high that certain characters look like they’ve had their teeth and eyes bleached. It doesn’t look as comically bad as some of the photoshopped YouTube videos doing the rounds, but it is distracting to say the least. Brotherhood fares better visually, but feels no less buggy and glitchy. During the opening race from the authorities alongside Ezio’s uncle Mario, the elder gent kept disappearing, or would suddenly be without his outer coat. Sometimes he simply glitched up walls in front of me. I know it’s easier said than done to fix many of these issues, but I don’t remember Brotherhood being this bad in the first place; it actually feels as though Ubisoft has accidentally edited errors into it.

As a game, it’s still excellent, though it suffers from similar problems to ACII, in that it feels dated now. Hit detection in combat feels off, although the fancy execution moves are plentiful and always satisfying. There’s more to Brotherhood, though, more to do and more to unlock, and so its shortcomings are easier to swallow.

Revelations, on the other hand, has managed to hold its quality fairly well. Noticeably more technically proficient than its elder siblings, the third game sees a grizzled, much older, Ezio unite with his ancestor Altair to finally discover the secrets of Those That Came Before and understand exactly what the Apple of Eden is. It’s also the culmination of Desmond Miles’ story, which began in the first game. For those who don’t remember when Assassin’s Creed was set half in modern-day America, Desmond is the descendant of Altair and Ezio who is kidnapped by Abstergo and forced to use the Animus to reconnect with his ancestors, live their memories and discover their secrets. At the beginning of ACII, he escapes with the help of thoroughly modern assassin Lucy and goes on the run with a few plucky rebels (including the world’s biggest douchebag, Shaun Hastings) with a portable Animus. The story continues through the next two games, concluding Desmond’s sometimes meandering tale and mercifully putting an end to the majority of the franchise’s time-hopping shenanigans.

The Ezio Collection also ships with The Lost Archive DLC for Revelations, which features mysterious antagonist Clay Kaczmarek, the guy Abstergo put into the Animus before Desmond and who literally lost his mind in the program. It’s a dull, first-person platforming exercise that doesn’t really add much to the overall experience, but it’s nice to have it included.

If I’ve come across as really negative here, I didn’t mean to, but I, like many, have incredibly fond memories of the Ezio Trilogy, and it feels like they’ve been given a bit of a kicking here. Revelations feels largely untouched, while ACII feels ancient and Brotherhood appears to be glitchier than it was before. If you’ve never played any of these and you’re a fan of the franchise as it exists now, you may be a little disappointed. If you’ve played them before now, then this collection is hard to recommend as you probably played the definitive versions on release.

An arbitrary remaster collection that fails to do justice to the memory of the originals.