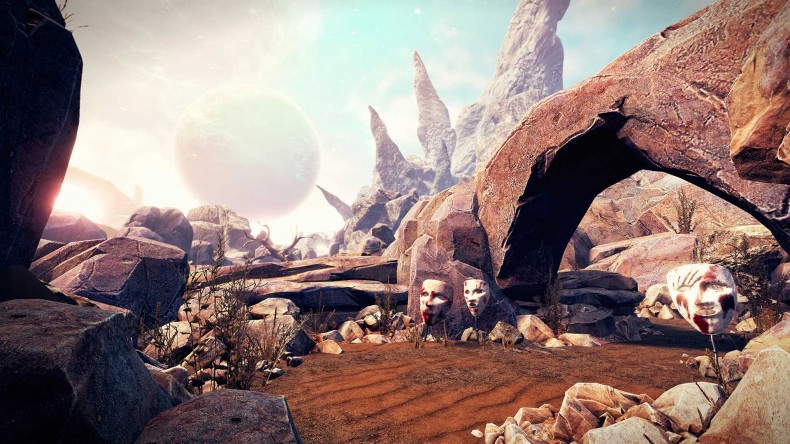 Alice VR is devoted to atmosphere and storytelling. This is a title that’s leisurely paced to allow you time to explore, ponder and enjoy the striking environments. It’s a ‘walking simulator’, one built specifically for VR that suits the new platform splendidly. And although it’s a bit rough around the edges, this is certainly a title worth experiencing.

Sometimes it’s nice to relax a bit when playing a game. Shooting, smashing, running, leaping and otherwise getting into action packed mischief is all well and good, but immersing yourself in a world and gradually uncovering its mysteries can often be just a satisfying. And indeed, Alice VR fits this bill wonderfully, taking you on an adventure of exploration and wonder through a re-imagined sci-fi version of Lewis Carroll’s Alice’s Adventures in Wonderland. You play as Alice, having been woken up from cryosleep by your ship’s AI due to your ship suffering damage and being in need of fuel. After a few puzzles that result in repairs to your ship, you are whisked away to a nearby planet in order to fetch materials to get your ship flying through the cosmos again. However, with the planet’s citizens mysteriously missing, you soon find yourself on a quest to figure out precisely what is going on.

The pacing is slow and largely dictated by how quickly you want to proceed. Locations are large and full of detail. Visual oddities, cryptic advice from a mechanical companion, gravity based puzzles and an eerie musical score, accompany you and encouraged you to explore the beautiful and trippy scenery. It’s a very good sci-fi facsimile of Wonderland that does a great job of compelling you to discover its secrets, surprising you with clever nods to the book and straight up weird vistas that you won’t see anywhere else. Beyond exploring and enjoying the tale, there are puzzles to solve. These are fairly simply ones as well, largely based on gravity, pattern recognition, shrinking, and, unfortunately, trial and error. They never yet too cerebral, but they often scratch just enough of your grey matter to feel satisfying to complete. The trial and error ones are less tolerable, and can take you out of the experience a bit, reminding you this otherwise intriguing planet is in fact a game environment. However, it all appears to be in service of the story and the exploration. Alice VR means to provide you with a wondrous world to experience at your own pace, with as few barriers as possibly to your progress. You’re not working from one puzzle to the next urgent to see the ending, instead you’re here to witness the brilliantly trippy sci-fi aesthetic.

However, whilst it’s intriguing enough to pull you in the first time you play it, its replayability isn’t so strong. There are plenty of hidden items to uncover, but once you’ve reached the end, experienced the story and seen all the locales, there’s little incentive to return. Mind you, with a five hour playthrough it’s one of the longer story-based VR titles, and with monitor support included, you can always experience the wacky world of Alice VR minus the VR.

Alice VR doesn’t have the most engaging puzzles, and its slow pace may be off-putting to some, but this VR ‘walking simulator’ through a sci-fi re-imagining of Wonderland is a beautiful, trippy and clever experience.