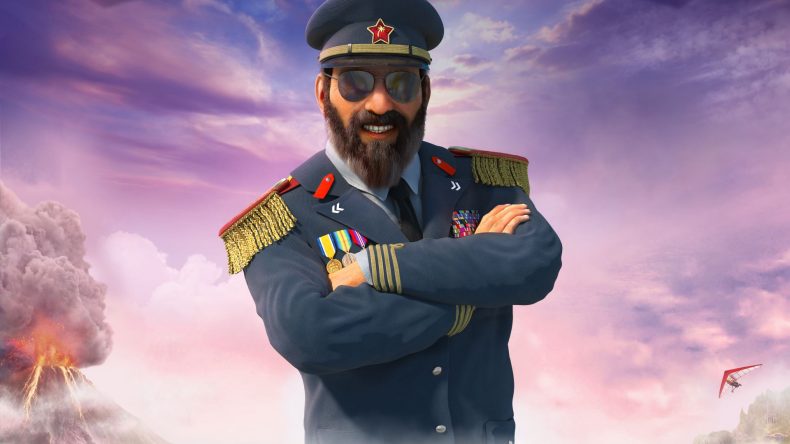 Whenever games give me the option, I always play as the good guy. With moral choices or dialogue options, I always follow the path of being a generally decent human being with good manners who treats people with respect. Maybe I’m just a nice guy myself, maybe it was my upbringing; whatever it is, I always plump to do the right thing. So why then do I have so much fun being a wicked despotic dictator who puts politics and his own personal well-being above that of the people he is suppose to lead?

Enter the Tropico series, which traditionally takes the regular construction and management sim genre, normally based on good morals and best practice and gleefully flips them on it’s head, and revels in what’s left over. Your goal is to stay in power as long as possible, with anyone and anything taking the fall ahead of you at all costs. As with previous titles, in Tropico 6, you assume the role of “El Presidente”, but rather than being a generic tyrant, this time around you actually get to customise your look with various outfits and accessories to humanise the dehumanising of your people. More options to modify your look unlock as you complete missions in the main game, giving you even more reason to pursue and succeed in your various nefarious activities.

Most of what has gone before in previous iterations makes a return here, with the most notable exception being the Dynasty mechanic from Tropico 5 which has thankfully been ditched. But traditional building, monitoring resources, happiness management, trade-routing, creating edicts and surviving the foreboding shadow of your next presidential election all make grateful returns. Also returning from Tropico 4 after a brief absence are Election Speeches, giving you an opportunity to sway voters into backing you as President. Not only do these go a long way to preventing an unfortunate Game Over if you’re overthrown, but now also provide an opportunity to showcase your perfectly customised El Presidente in all his/her glory as they address the people from inside their Palace. If all of this is new to you and sounds a bit confusing / bonkers, then have no fear because Tropico 6 has a few Tutorial missions to bring the uninitiated up to speed with how things work, and what you need to keep an eye on as a new banana republic ruler. Unlike most tutorials in the genre it doesn’t start at the very basic level like “build houses” or “generate food”. What it instead does is demonstrate how to monitor various attributes of your population such as fun or hunger, and shows you how to tackle it. It also provides a top-line introduction into how most of the mechanics work, and how you can and should use them to your advantage and when. Opportunities to demonstrate a rudimentary understanding of what you’ve learned are provided but often in isolated pockets. The real learning begins when you enter the pre-designed mission levels which throw different scenarios at you that you must overcome, and in order to do so must demonstrate accomplishment in some or all of the areas provided in the tutorial. Some management sim titles seem to revel in detailed tutorial sections for fear of missing out on introducing every facet of the game, whereas Tropico 6’s method is more laid back and trusting of you as the player. It’s a great way of not overly hand-holding your learning, and also encouraging you to get stuck in and try things out for yourself.

Even seasoned veterans of the series will likely want to partake in the tutorials because they showcase some of the new features to Tropico 6 that you’ll be unfamiliar with. The first is a fairly blunt change in that now your dictatorship isn’t confined to a single island, but is designed for your tyranny to embrace an entire archipelago. To facilitate this, you can now build road bridges between islands for travel purposes, and there’s also the introduction of Teamster Ports to facilitate the transport of goods when setting up on a new island for the first time. In general this works quite well, with well-stocked ships navigating between ports fairly efficiently, although a fair bit slower than if you were on the same island. Also thankfully you don’t have to worry too much about the placement of road bridges, because they don’t obstruct sea traffic at all, meaning you can create road links for prime efficiency rather than worrying about the impact of your sea routes. It means you can have a completely separate island dedicated to tourism, or mining or whatever takes your fancy, and managing between the islands is easy thanks to introduction of the handy Archipelago View zoom function to quickly draw your attention to whichever island it needs to be. Raids are another big addition to the Tropico formula. You first build a Raid building unique to the era you’re in, and upon completion it begins generating Raid Points. You can spend these accumulated points on special raid missions, whereby you send your raid agents out to do your bidding, and return with some valuable rewards. These can start off pretty basic like simply looting your enemies for certain resources, perfect if you are running low of something in particular. But when these Raids ramp up, they really do, and you can even send your agents out to steal well-known landmarks and return them to your island. So if you’ve ever wanted the Eiffel Tower, the Statue of Liberty or Stonehenge outside your Palace window, now is your chance. Each landmark provides bonuses to your island and its inhabitants, akin to Wonders from Age of Empires, but such raids take a lot of time and resources to pull off but are a great culmination of achievement. Especially when you consider in the intervening time, you’ll have likely had to fend of coups, riots and bribes, but hey, that’s all in a day’s work for El Presidente!

Other tweaks include a wider breadth of travel options for your island inhabitants and tourists, with tunnels, bus routes, and even cable cars to construct. It keeps your denizens mobile and able to access areas that may have been off-limits in previous titles thanks to the options available. And, yes they work, but you’ll likely find yourself not using them a great deal unless a mission dictates you need to, meaning they have less of an impact to your enjoyment than some of the bigger changes like raids and ruling over multiple islands. So whilst it’s considerate and gives you more options to tinker about with, it won’t be the thing that keeps you coming back for more.

By and large the game plays well, and looks better than Tropico 5, which was no ugly duckling. This is true whether playing the pre-defined missions or in sandbox mode where you are left to your own devices. The only niggles I unearthed were a bizarre sound when placing ranches, which sounding like the menu sounds going into overdrive creating a high-pitched squeal until I placed the building. I also experienced minor freezes when trying to select dialogue options, normally remedied by opening the menu and closing again. Neither broke the game or my engagement for very long, but were noticeable when everything else was running well. The only part of Tropico 6 I’ve yet to experience pre-launch is the multiplayer, which allows you to play against up to 3 other players with a whole host of options to tweak the island itself, win conditions, and the difficulty based on a variety of factors. After launch, I can report back if there are any issues, although in previous iterations in the series, this part generally ran well. But even enjoyed solo, what will keep your spirits up is the continued wonderful combination of bright paradise surroundings, cheeky humour supplied by your returning faithful servant Penultimo, and the excitement and tactical nature of playing the political game. In that sense, Tropico 6 shines where the series always has, and with its familiar backing of calypso-style tunes to give that Caribbean vibe, it continues to carve out a very specific niche for itself in the management sim market. And that niche has always felt like it has more of a personality than its rivals such as Civilisation or Settlers, because this isn’t about perfecting a model town with efficiencies, it’s about survival and that makes it much more personal, and engaging. That has always been the series’ ace in the hole, and it plays it well. The new additions feel like they enhance the silliness in ways that make the game more enjoyable. I can now send out agents to steal Stonehenge for crying out loud, I’m like a post-colonial Gru from Despicable Me, and that is an enjoyable persona to adopt. Sure it means delving into political underbellies and having to carefully balance conflicting priorities and interests, but it’s done in such a charismatic way, that it feels as far removed from today’s politics as you could imagine.

It will never win over those who don’t enjoy the genre or the purists devoted to other series, but it doesn’t have to. Tropico 6 knows what it is and plays to its strengths, feeling like a self-aware culmination of what has gone before, by scrapping the useless and adding enhancements which serve to bolster both the experience and the joyous feeling of being El Presidente. An evolution then, rather than revolution, which is ironic given the setting, but that will be more than enough to satisfy both fans of the series and those potential newcomers who are intrigued by the premise. Being bad has never felt this good, and you could even nab the Statue of Liberty for your troubles.

Tropico 6 is the best in the series to date, taking the personality and humour from previous titles and adding extras that make being El Presidente feel better than ever.

Dungeons 3 is coming to Switch on September 15th