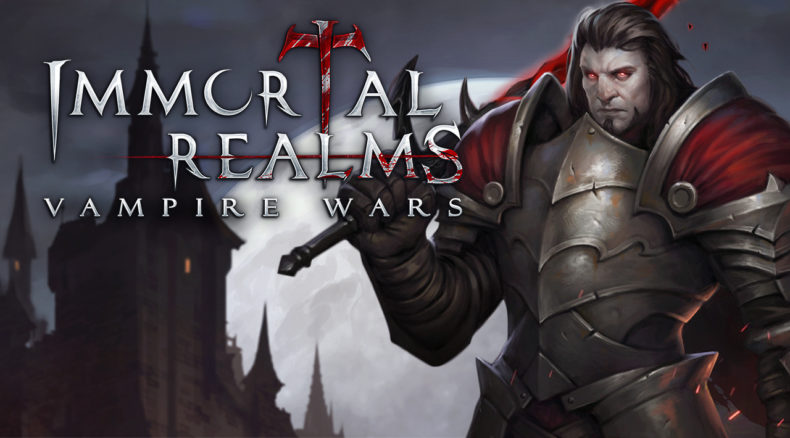 Immortal Realms: Vampire Wars is a hard game to pin down, to categorise, and compare to. It’s an empire management simulation that also has turn-based, top-down grid-based battling, like a fantasy-based XCOM game. Oh and it asks you to manage resources, has RPG elements, and also some trading-card mechanics thrown in as well. All this is based in a world full of vampires, werewolves, and giant bats looking to take down their human hunters. It’s a melange of themes that certainly gives it a unique feel. Some will enjoy it, others will tire of it quickly, and some, like me, will flit between those two feelings whilst playing through its fairly meaty content.

For a game such as Immortal Realms: Vampire Wars, playing through the tutorial is highly recommended, even for strategy and empire management aficionados. It’s a fairly robust tutorial that gradually introduces its many different facets, from the intricacies of the overworld map, to the various considerations during its separate grid-based battles. The number of mechanics you are introduced to is a little overwhelming, but they each make sense in isolation when explained and executed through the tutorial. You’ll finish it getting a sense of what you’ll need to do in the main game even if your head is still whirring trying to remember how some of the interlocking pieces fit together. 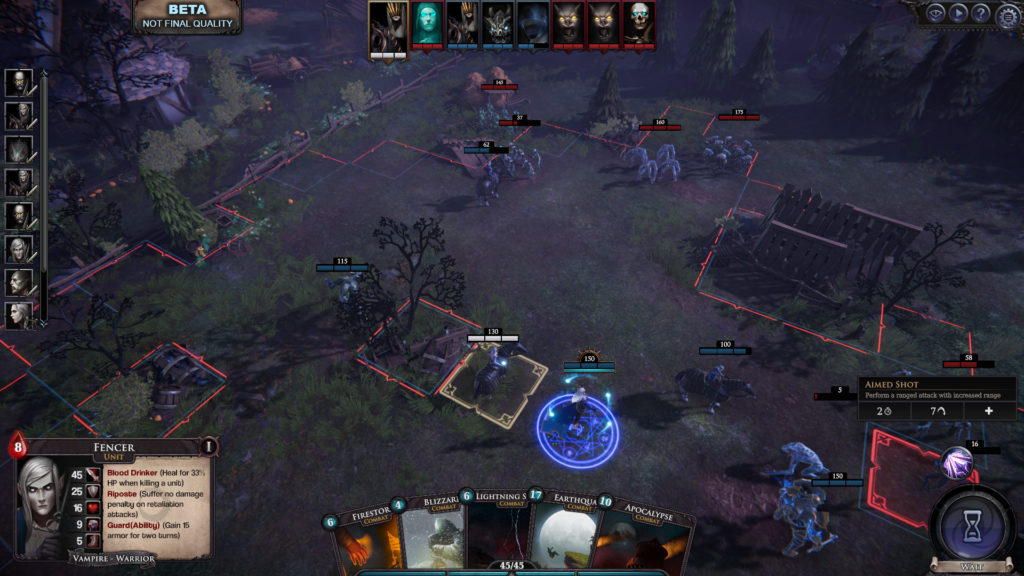 And so into the campaign you go. It consists of three separate faction campaigns, each with four missions to play through to appreciate their separate stories. But you have to play through each in order, so only a single first mission from the initial Dracul clan is available. And then, bizarrely, Immortal Realms mixes up the rulebook and abandons a few of the mechanics it has literally just laid out in its tutorial. Throughout the campaign, missions have their own specific rules which restrict what you can do, often in the interest of balance and the story it is trying to tell. However, it did feel a little odd having to disregard things I’d been taught minutes before.

The one thing this decision does create is a sense of progression. As you make your way through the campaigns, these restrictions tend to ease, opening up the experience, and certainly making the beginning of each mission feel less repetitive. You’ll find yourself having to juggle more ideas and take more decisions as you go, while wrestling against enemy forces that become clearly more aggressive in their pursuit of you. The problem is that en route to that feeling you’ll find yourself in earlier missions which take too long and have unbalanced difficulty, making them feel like a slog to get through before you unlock the true experience.

Some of the rules feel a little confusing too. The first mission, for example, restricts your ability to recruit new units for your army. Death is permanent in battle, so you need to ensure you don’t lose units. You’re now relying on your tactical nouse in battle or a very expensive random card that gives you two base units when certain conditions are met. I was confused because my card hand was being filled up with cards that made recruitment cheaper, which felt odd given I couldn’t recruit. I randomly tried using one after many turns of discarding them and bizarrely, the game let me, leaving me gobsmacked. I’m now on a mission where you can’t recruit, but you can. 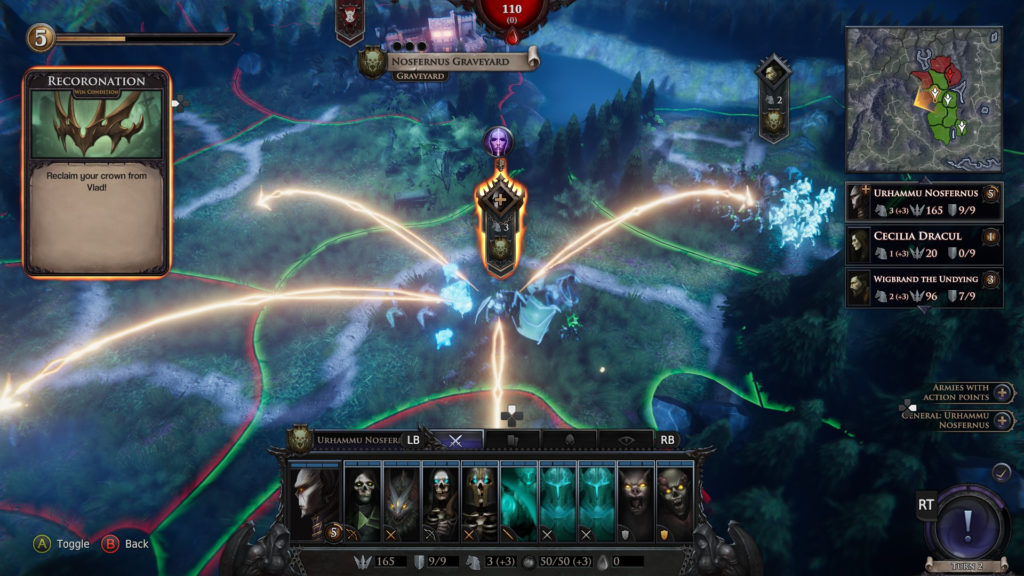 Separate to the management side are the battles themselves. Battles are turn-based, with damage being dealt to a chosen adjacent unit, with most units able to deal smaller counter-attack damage back as well. Ranged units, others with unique abilities and various landmarks on the battlefield providing boons, help to keep the battles fresh for the most part. You can see your movement options ahead of time as well as the damage you will do and incur during each potential clash between units. If your army is led by a Lord, they have additional spells they can cast using mana at any point when your army could make a move. These could further buff your army or harm your opponents and add an additional tactical layer to proceedings. Generally, it works well, making battles feel strategic, making victory all the sweeter.

The battle grids themselves are large enough to cope with your armies, which are capped at a maximum of eight units. However, there are numerous buildings and other natural obstacles that prevent movement through certain grid spaces, which creates bottlenecks for your army more often than not. Whilst some will enjoy manipulating the chokepoint potential, in reality, units are left unused in a line behind each other given that even friendly units cannot move through each other or occupy the same space.

The UI also feels a little haphazard in places. During battle, you can’t inspect enemy units to understand their strengths easily, and on your Lord, who will likely have various skills and buffs, the game scrolls through rows of text before returning to the top, meaning if you missed it, you’ll need to wait a few more seconds for it to scroll around again. Saving is fiddly thanks to a condensed window forcing you to scroll down to see your saves. Also, the option to create a new save is always at the bottom of the list, making it an overly long process to complete. 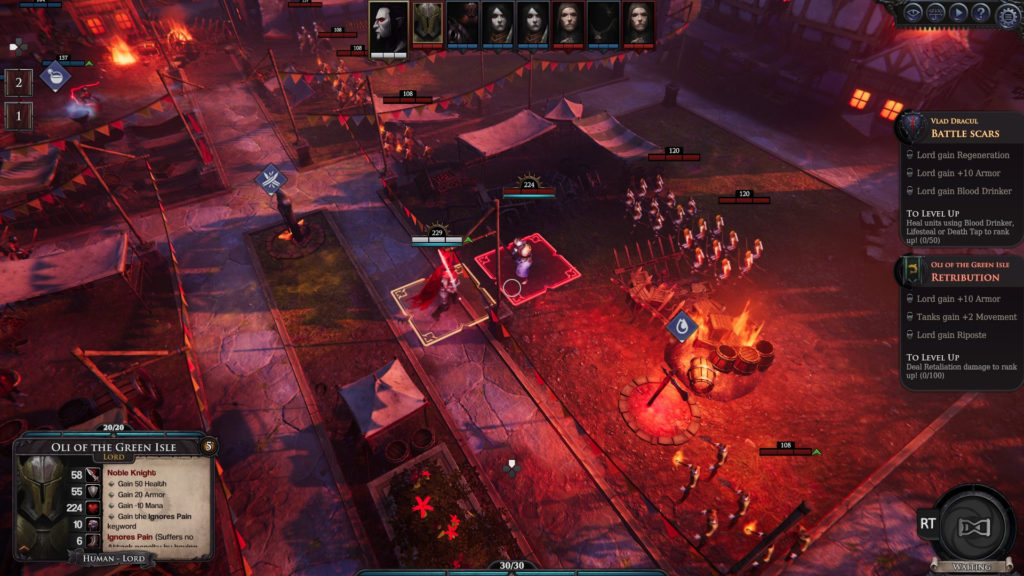 Immortal Realms: Vampire Wars ultimately feels like a game that is lacking that final level of polish. It has some great ideas, lots of them in fact, and few would argue that the vampire setting isn’t a cool and interesting one. The problem is in the execution. The myriad different genres and ideas often compete with each other rather than working together as a cohesive whole. Missions either feel confusing, arbitrarily difficult, or even breakably easy given how it plays.

Those with experience of strategy sims like Total War will likely bemoan the simplicity here, and the absence of the carefully crafted nuances that make that series so strategically successful. Armies are separate and can’t support each other, buildings are few and often repeated across the map, and the resource management of blood is very dialled down. However, plenty of other people will enjoy a stripped-back experience. You can focus on simpler battles, not have to worry about lots of competing problems, and instead focus on progression with enough ideas and decisions to keep you in control of your own fate.

Immortal Realms: Vampire Wars certainly won’t be for everyone, and that’s actually OK. If you can look past some of the design shortcomings, there’s a decent amount of ideas here and a pretty cool setting too. It’s not revolutionary, but more a solid set of foundations that provide a decent experience for those after a simpler alternative to some of the more complex strategy titles currently available.

Immortal Realms: Vampire Wars offers some new ideas and a cool setting to the strategy genre. However, its stripped-back approach may be too simplistic for some.

You may also like
Immortal Realms: Vampire WarsKalypso Media