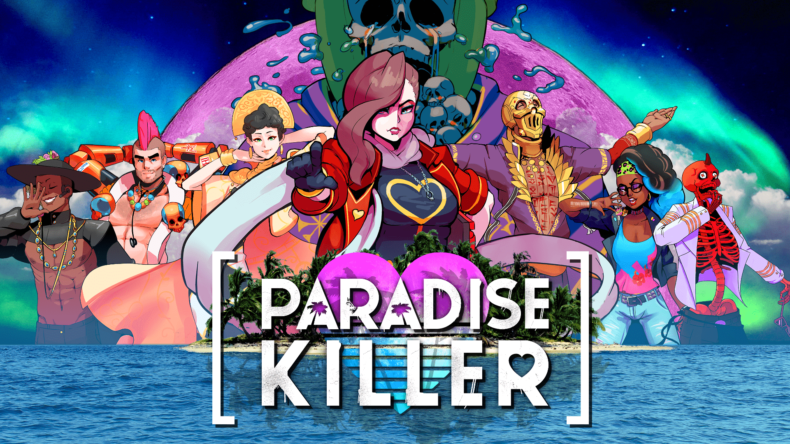 I have never done psychotropic drugs so I have no frame of reference for what I am about to say, but Paradise Killer seems to me to be exactly what would happen if I were to find somewhere safe, kick back and drop some acid. It is an open-world investigative game where you must track down the brutal killer of the entire Syndicate council of Paradise Island sequence 24 and bring them to justice in an elaborate presentation of your discovered truths before the Judge. It features characters whose names are Doctor Doom Jazz, Sam Day Break, and more weirdly, The Witness to the End. It’s a game where black market secrets can be traded for blood crystals with a ram-headed lady called Crimson Acid, and where a (possibly) fox-headed, blue demon with a smiley face over his particulars pops up all over the place to give you clues and taunt you. It’s a bonkers, sexy weird fever dream set in a slightly janky island “paradise” that resembles some kind of mega timeshare horror show. And, frankly, it’s bloody brilliant.

You play as the “investigation freak” Lady Love Dies, brought out of her 3 million day exile in the idle lands for illegally communing with the God D amned Harmony to handle the investigation. The prime suspect, Henry Division, a demon-possessed citizen, was found near the crime scene, his stomach full of the blood of the Council, but something doesn’t add up. Your job will be to scour the island for clues and interrogate the remaining characters to find their motives and query their alibis until you are satisfied that you have found the real truth of the murders, or at least one that you are happy with. 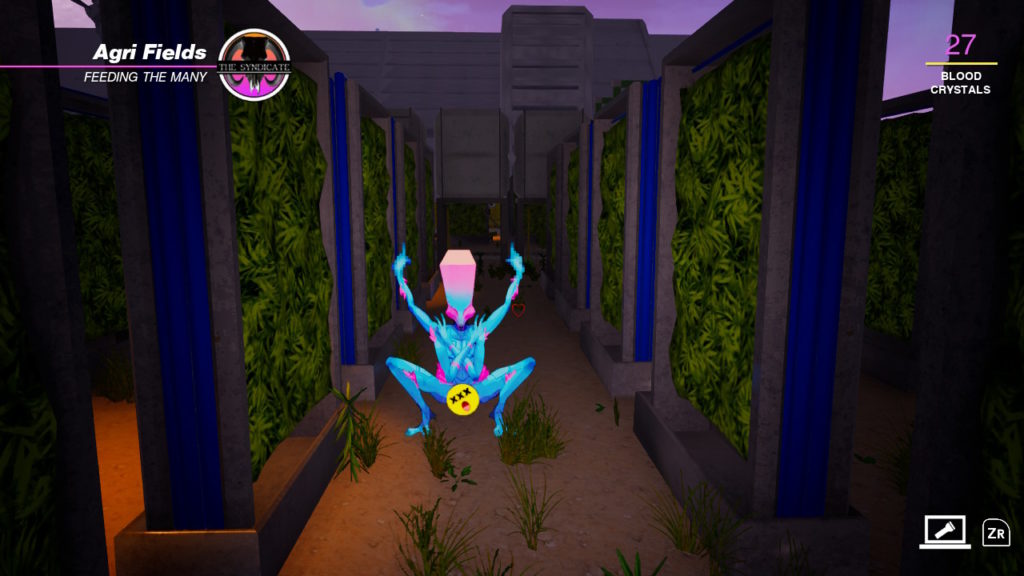 You are free to question each suspect in any order you wish, and the whole island is essentially open for you to explore. Some areas will only become available to you once you have found and installed upgrades for your personal computer, Starlight. These will allow you to hack the nightmare computers around the island using a simplistic visual match puzzle system. Starlight is your own personal notebook, neatly storing all the notes and clues you have found along the way. It can analyse DNA samples you find, as well as track phone records. In here you can keep track of who each suspect is, their background, and how they link to “The Crime to End all Crimes” as well as the other tangential crimes that have occurred on the island.

You will do a lot of back-tracking as you find more clues that open up other avenues of conversation with each suspect. There are a few different dialogue options when questioning witnesses, a simple choice between “professional” or “friendly” perhaps, but I never got a strong sense that choosing one over the other meant I got a different answer. At times you can choose to just chat with the suspects and improve your relationship with them. If you are successful they will offer up other pieces of information and gossip that can help create a clearer picture. Ultimately though you will have to doggedly follow each lead to its conclusion if you want to achieve any sense that you have found your real truth. However, that doesn’t mean that you can’t just go to the Judge at any point and present the evidence you have, although why would you want to do that when exploring the island and uncovering a new lead is so compelling? 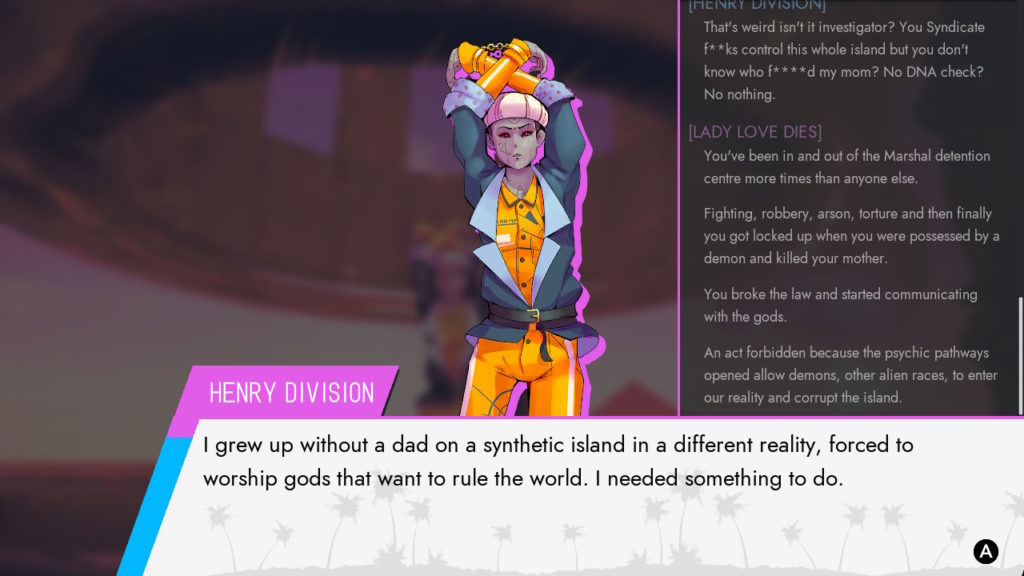 If I do have one criticism its that some of the game’s systems are not explained to you at all. The currency used is blood crystals that can be found in the world. You need these to purchase secrets from the aforementioned ram-headed beauty, but you can also use them for Fast Travel around the island, to purchase drinks from the various vending machines around the island, buy skins for your Starlight and take foot massages. Initially, I felt that this currency was rare so I hoarded them, particularly as Crimson Acid charged me ten of them for my first Starlight upgrade. Furthermore, if I was using them for black market secrets and fast travel around the labyrinthine island why would I spend them on seemingly useless things like weird dispensed drinks and a foot massage? Without spoiling things too much, both of these things do have their uses, but it would perhaps have been a little better had I understood that earlier on.

It’s a small concern though, because Paradise Killer is a fantastic detective game. The weirdness of the world and its characters are easily understood thanks to the wealth of detail held within your Starlight computer. Each new revelation is genuinely interesting, the clues making the central narrative twist and turn so much so that everyone feels like they had a motive to do it. I loved every minute exploring the weird, neon world of Paradise Killer because it felt like everything I discovered was a genuine reward for my persistence in following every line of inquiry. Furthermore, Paradise Killer plays with the idea of truth and justice in really interesting ways that had me thinking long after I presented all my “evidence” at the trial. A singular experience.

Paradise Killer is a singular experience. An open-world detective game set in a weird, neon world where everyone is a suspect and each piece of evidence feels genuinely earned.