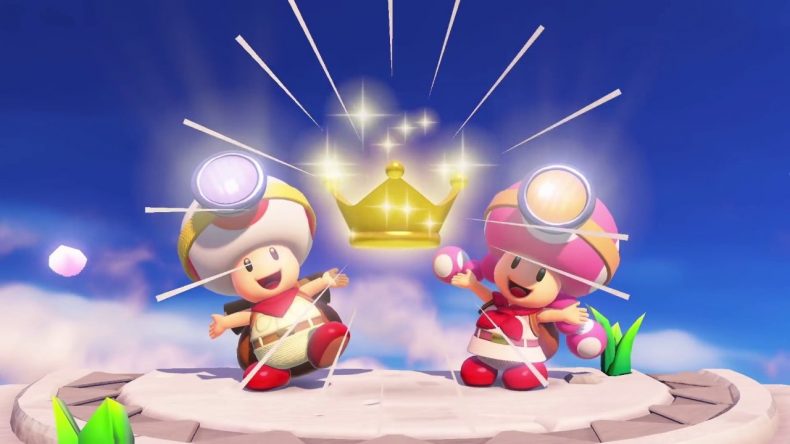 Nintendo’s pint sized adventurer is back, and no I don’t mean Chibi Robo. Fresh from last year’s Switch release of Wii U’s Captain Toad Treasure Tracker we now have actual DLC for Toad and his infamous legs that absolutely refuse to jump. But just what’s in this little package for us to get our explorer caps on?

Don’t go getting your hopes up too much here: there are eighteen new challenges to undertake where instead of collecting stars you’ll be grabbing crowns alongside the usual assortment of coins and gems, gems being particularly important due to the fact later levels only unlock if you’ve collected enough of them. The biggest let down is that of these eighteen challenges only five take place on new courses, so you’ll be seeing levels you’ve already seen for the most part.

What they’ve done though is mix these old levels up with new things to do, like fighting off Boos or collecting five crown tokens within a time limit. What’s certainly the case here is that these new challenges have been made with co-op in mind. In single player the Boo-spotting levels have multiplication cherries to pick up giving you two headlamps with which to pop those Boos, which you won’t be able to do otherwise due to the sheer number of them. Whereas in co-op those cherries don’t exist meaning you and your partner will have to co-ordinate which direction you’re pointing in. There’s no such thing for the timed crown token though, you’ll need to figure out what the crown appearance order is, and start making your way to each token as soon as you grab the prior one. This is obviously much easier with two players as you can cover half the course each with each player picking up every other token. On these levels those gems only appear for the duration of the token whose collection lasts for, the minute you grab the next token the gem disappears, so, while it’s possible to do this alone you’ll probably find yourself re-doing the full collection to ensure you grab the gems, something that once again is much easier with another player to co-ordinate with.

Obviously co-op isn’t always going to be sunshine and rainbows. Because Captain Toad is a single camera game, co-ordinating your progress through a level when you’re after different things in different areas can be tricky, especially when you can both control the camera. It’s only logical that a viewpoint that works for one player may obstruct the view of the other and considering that your walking direction changes with the camera’s perspective you’ll wind up fighting for control more than you’ll be dodging enemies. My son and I found ourselves shouting at each other because our hogging of the camera controls wound up with us killing each other regularly, but it was never less than funny every time it happened. What’s good about this though is that now all the levels from beginning to end can now be done with two players, and lives aren’t lost unless both players pop their clogs. If one person goes down then the second floats in a bubble until the other gets into a nice open space to pop themselves free. So this is obviously good for people new to the game, or for those who fell off due to a particularly tricky course. It doesn’t make things too easy, but the extra chance a second player affords can be a god-send during some of the hectic latter levels.

What needs to be remembered here is that the co-op element is a free update for the game, adding a new lease of life to an already charming title. The new bonus episode will set you back £5.49, which is pretty good value for the extra challenge it represents, and as you can tackle it with a friend or even an exuberant offspring it promises good times for anyone who picks it up. Captain Toad would probably say that adventure is its own reward and that its fruits are priceless, but here they cost just £5.49 and you don’t even have to leave your house – though you can if you want to.

Get ready for adventure again with this bite sized extra episode for our pint-sized rambler, great value at the price of a London pint.