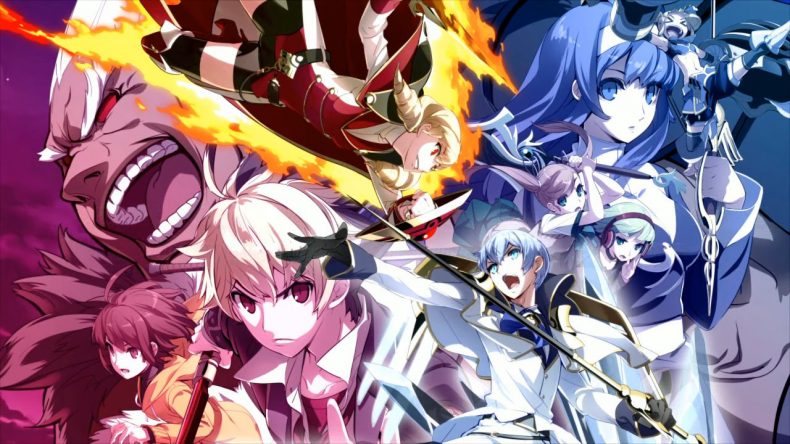 It may not have a name that rolls off the tongue, nor will it trouble the mainstream in this part of the world, but the Under Night: In-Birth series from French Bread is the toast of the fighting fraternity, thanks to its inclusion in the 2019 EVO selections. It was during that tournament that this latest refinement of the series was announced. Adding an extra character, tinkering with some balancing and adding some new moves, make Under Night In-Birth Exe:Late[cl-r] the best incarnation of the series yet, the first one to garner a worldwide release, and its Switch debut.

(cl-r) is a striking game in more ways than one. It looks absolutely terrific on the Switch in both docked and handheld mode, thanks to the deliciously animated and thoughtfully designed characters and interesting yet uncomplicated stages that let the fighters be the stars of the show. The action is driven by a bonkers visual novel plot that weaves through everything you see and do, and tells of the Hollow Night – an entity that envelops the land and causes all kinds of mischief. Every screen, every pre-match preamble, and post-bout scene is packed full of detail. Eminently quotable swearing is all over the place, including – hilariously – in the movesets. The tutorial missions, tweaked here to reflect the new moves available in Under Night In-Birth Exe:Late[cl-r], are not only comprehensive and incredibly fun to play through, but also feature gems like moody goth hemomancer Carmine’s finisher which is named: “You Shit! This is the END!” Much like recent simple-yet-deep Arc System Works titles like Persona 4 Arena, Under Night In-Birth Exe:Late[cl-r] is a relatively easy game to pick up. Combat is mostly ground-based, with not much in the way of air dashing and an inability to block ground based attacks when you are in the air. Chaining the three different attack strengths into combinations is intuitive and here can be done in any order. You can also access a simple multi-hit combo by repeatedly tapping the light attack button. This means it is easy for a newcomer to get results off the bat, before mastering the more complex chains later on. The absolute best bit of the combat system is the GRD – a bar that plays out as a tug-of-war style power struggle over the course of each round. Attacking and defending and the use of combos and specials have an effect on the meter, and every 17 seconds, the player in the” lead” will switch into Vorpal State. Entering this transcendent zone enables more damage to be inflicted, and for unique character specific moves to be used. Going Vorpal can completely turn the tide of a battle, and good technique in attack and defence is richly rewarded, without completely unbalancing the game.

There is a hefty Chronicle single player mode that acts as a series of battles framed by a labyrinthine visual novel, and will appeal only to those with an emotional investment in the characters and story, although it is wildly amusing at times and those who like unexpected swearing will get some enjoyment, and laughs. It all looks so damn stylish that you find yourself drawn in regardless. The aforementioned training modes are superb, and packed with excellent, easy to understand descriptions and some knowing humour. Getting to know the vast range of characters, including the ice-attack-wielding newcomer Londrekia, is a pleasure and certainly not a chore. Playing socially with friends is always the best way to experience a one-on-one corker like this, and there are ways to do so with a variety of controller options available. As with many Switch based affairs, I always feel slightly more comfortable and in control using a separate dedicated controller, as those with chunkier thumbs may struggle chaining button commands on the small Joy-Con controllers. Something like an arcade stick or an 8bitdo pad works a treat. Sadly, the online experience of Under Night is let down rather by its use of delay-based code, which can lead to some seriously laggy matchups.

Online flaws aside, Under Night In-Birth Exe:Late[cl-r] is comfortably one of the best looking and fun to play fighters for the system. Very little is compromised when compared to the PS4 version, and it feels at home in your hand, and stands up a treat when docked. It richly deserves the EVO recognition, and for fans of the genre is an essential Switch buy.

Online lag
Single player not for everyone

Our Score
9.0
SCORE OUT OF TEN
9.0
You may also like
Arc System WorksNIS AmericaPC