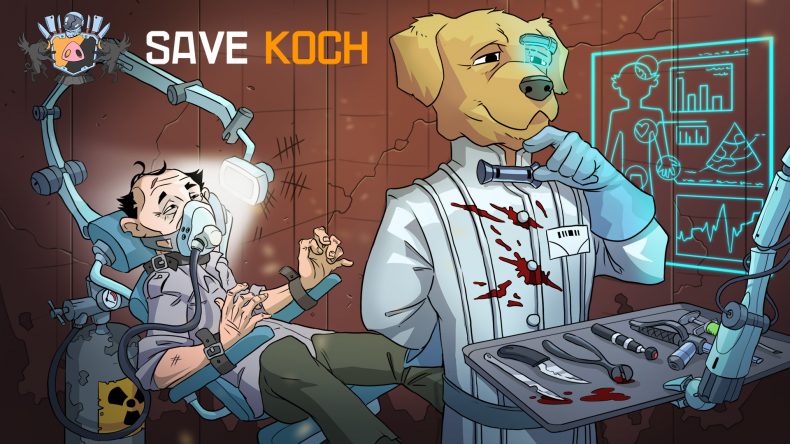 Save Koch is a complex and surprisingly hardcore simulation game with a noir theme. You play the part of Jeffrey Koch, the Kingpin of a crime family in a city of anthropomorphic animals. Someone has put a hit out on you, and there is a mole in your organisation. Shuffled off in the middle of the night to your safe house, you have five in-game days to try to work out who both of them are, and save your life.

Gameplay is minimal and straightforward. You are in lock-down, on your own in your safe room. Your loyal lieutenant Burmecia (Burmy for short) has had the tip off that there is a threat to your life, and after taking some time she has confirmed that it is genuine. You will die within five days if you cannot uncover who the mole in your organisation is, and who has masterminded the hit. You can’t trust anyone, not even Burmy who has also despatched a team of her rats to protect your daughter. You direct the action via your desk in the safe room. Aside from a few items on the desk there is not much to interact with. You can use the telephone to call a number of people and have conversations with them in the hope to uncover a clue. You also have access to a tablet device from which you can send members of your team to investigate various happenings in the city. In front of you is a giant fish tank with some sharks swimming around it it, and occasionally the fish tank will switch to a viewing screen showing you breaking news stories going on in the city that may or may not be connected to the threat to your life. Additionally there is a board that details the structure of your organisation, as well as that of the other crime families, law enforcement and city officials that also inhabit the city and who could be involved in the plot to kill you. You can also use this board to make your accusations, but be careful as if you make a mistake it will remove that individual from the game and you will no longer be able to find out clues associated with them.

From this limited area you direct the action, making calls and sending your minions to do an ever increasing number of tasks. As the days progress the amount of tasks increases and you will inevitably miss out on doing some things. You won’t know which ones are important and may well find yourself wasting valuable time on stuff that doesn’t get you any closer to solving the mystery. You have four team members at your disposal. Burmy is a given, but at the beginning you can choose three from a cast of characters. Initially you only have three available to you, with more unlocking as you perform un-knowable tasks during the course of one run through. I say un-knowable because the game throws so much at you it is hard to keep track over the course of multiple playthroughs which one of your actions caused a team member to die, or which one caused a seemingly unstoppable fail state that sends a wave of chaos across your tablet.

Save Koch has a procedural element to it in that the Mastermind and the Mole will be different each time, however over the course of a few playthroughs I realised that the events occurring are the same each time. Furthermore, different characters will be introduced at the same point in the day cycle. Upon that realisation I made sure that each run through focused on a specific thing in the hopes to gradually reveal elements of the over-arching story that are confusing, like the mystery behind your missing wife and an attempted coup on your leadership a few years ago by one of your associates. The problem is though that you are bombarded with so much stuff at an impossible rate, even a focused approach quickly becomes difficult. Furthermore, there are certain events that seem to trigger a death of one of your crew depending on who you send to deal with it, but you have no way of knowing this beforehand. It seems, for example, if you send Melinda, the barely functioning alcoholic ex detective, to a particular incident she will be killed every time, without warning, leaving you with an uphill battle. I had other issues as well in terms of timings. Koch’s day and night cycle is set at 9 a.m. until 9 p.m. each day. Regardless of what you are doing when the clock hits nine you will automatically fall asleep, and any actions left on your tablet that you have not directed a minion too will count as a failure and the loss of a potential lead. It becomes apparent very early on that you are expected to fail a number of times as you piece things together, but the issue is that asking you to play the same thing over and over again quickly becomes tiring and Save Koch suffers greatly from a sense of repetition for not enough reward.

I wanted to like Save Koch, but there’s too much stuff going on, and a lot of what seems like precise requirements for success that makes it a bit of a chore at times. The underlying mystery and subsequent detective work involved to work out who in your organisation has betrayed you does have a sufficient hook, however there is too much going on and too many ways that you can fail without really understanding which of the tasks you did or didn’t do caused the failure. Despite some sharp writing, and an amusing cast of characters there doesn’t feel like enough there to keep you coming back for repeated playthroughs. You can unlock more characters to choose from by performing certain actions in game, but like everything else there doesn’t seem to be enough signposting as to what those conditions are, as a result I am not overly invested in being able to save Koch at all.

Repetitive
Too many fail states

Save Koch is a complex and surprisingly hardcore simulation game with a noir theme, but there a few too many fail states and it's too repetitive to be truly enjoyable