previous
Save Koch review
random
next
One Punch Man: A Hero Nobody Knows review
0 likes 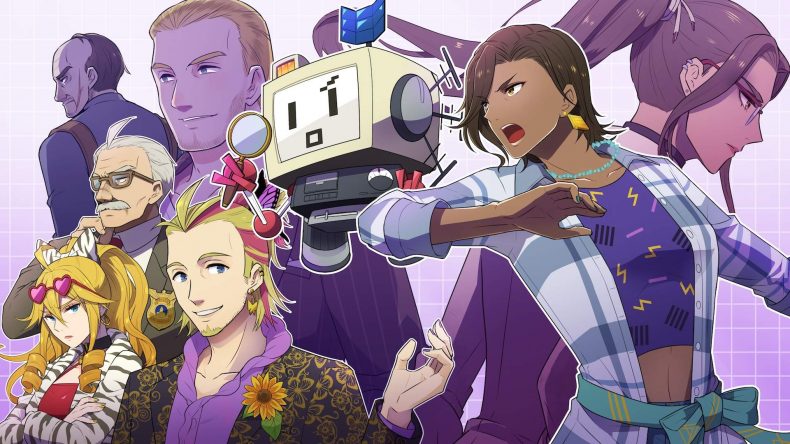 The simple joy of taking a quiet moment to solve a puzzle has always appealed to me. Whether it’s solving a Sudoku in a magazine or a line puzzle in The Witness, engaging your brain to think through a problem is so rewarding when you finally find that solution. Puzzles aren’t particularly flashy though, there’s nothing sexy about a Sudoku. Thankfully Murder by Numbers takes the simple Picross puzzle, and mixes it with a delightful crime adventure with more than a hint of Ace Attorney.

You play as Honor, a young twenty-something actress on a hit crime drama, who gets dragged into the real world of police investigation in no small part due to SCOUT. SCOUT is a mysterious floating robot, with a host of crime solving abilities and a murky past. Together you’ll get embroiled in some murder filled situations, and maybe even solve a puzzle or two. Any time you find or are presented with a piece of evidence, SCOUT will need to scan it. This is visualised in the form of a Picross puzzle. For those who have somehow managed to avoid Picross until now, in Picross you start with a grid of square. Each horizontal row and vertical column has numbers assigned to it, stating how many of its blocks should be filled to draw the solution (which end up being a pixel art picture). Each number dictates how many consecutive blocks must be filled in, and if there are two numbers then that means there’s a gap between them. It’s not unlike solving a Sudoku, but a little faster and with the reward of shading in a picture when you’re done.

Murder by Numbers explains Picross puzzles absolutely masterfully, and amps up the difficulty at the perfect pace. After a quick tutorial while rebooting SCOUT, you’ll soon know all the tricks to start solving the blocky blighters. You are given the ability to fill in, mark and put an X through blocks to keep track of which should be filled in and which shouldn’t. The UI does a great job of showing all your progress so far, whilst ensuring you have all the tools for the job. For those particularly perplexing puzzles, there are also hints that can be activated if you don’t mind losing some of your precious detective rating. Life as a makeshift detective is the absolute classic adventure game formula of find an item and present it to someone who might know more about it. Taking the hip flask to the obviously drunk man will more often than not propel the story forward. It’s a deliberately simple set up, with nothing to prevent you from going to each character (or suspect) and showing them every item in your bag. This does lead to some amusing situations too, especially when you show them something completely unrelated to the story.

The story in Murder by Numbers completely took me by surprise. While presented as a larger than life adventure packed full of wacky characters, some of the themes running through it are genuinely human and remarkably touching. The aftermath of abusive relationships, pressures of parental figures, and dealing with loss are all touched upon in the game’s narrative, and are done so with absolute aplomb. The happy and amusing antics of SCOUT serve as the perfect antithesis of these hard hitting themes. Everything about this game’s story simply blew me away. When you’re done with the story, there are plenty of bonus puzzles to complete that you unlock by achieving a certain rank of detective rating in each of the game’s cases. By refusing to use hints, you’ll be given a nice catalogue of puzzles to solve at your leisure. To mix things up from your standard Picross affair, some sections also require you to fill in a grid with a time limit, and without marking the board with anything but the final solution. Although these sections are in most ways the same as the other puzzles you’ve been solving, I appreciated the slight shake up when it occurred.

The art of Murder by Numbers is absolutely gorgeous. The 80s aesthetic and comic book style is a joy to look at, and the great soundtrack (and incredible opening theme) fits the style perfectly. I really don’t have anything bad to say about this puzzling adventure. When going through text it’s easy to accidentally ask the same questions again if you’re a little over eager with the A button, and you’ll have to sit through the conversation again. That slight annoyance is the only issue I had though, playing through all 4 of the game’s cases. Murder by Numbers is the blend of crime adventure and Picross that I never knew I wanted. With a touching narrative, tons of aesthetic charm, and a tutorial and difficulty curve tuned to perfection, this murder mystery will have you solving block puzzles in your head any time you’re torn away from it.

Can be easy to repeat conversations

This charming crime drama is packed with emotion, and provides the perfect framework for your journey into Picross. Murder by Numbers masterful learning curve and beautiful art style will keep you coming back for more, and its heart-felt story will stop you from ever putting it down