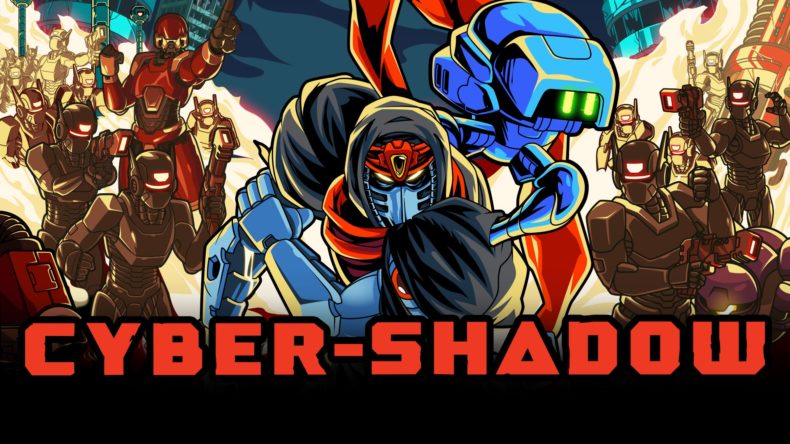 When you hear the name Yacht Club Games, the game that comes to mind is Shovel Knight. After a phenomenally successful Kickstarter campaign, the garden tool wielding hero was brought to life in 2014 to almost universal critical acclaim. Since then we’ve had plenty more shoveling content from the studio, with the final stretch goal bonus campaign releasing at the end of 2019. Now Yacht Club are back to showcase an entirely new game, as a publisher this time, with Cyber Shadow from Mechanical Head Studios.

In a world taken over by robots, Shadow is awoken to find his clan-mates all but beaten in a savage war of man versus machine. A small blue robot informs you of the current state of Mekacity, and you’re thrown into an 8-bit adventure to acquire the abilities of your people and overthrow the evil synthetics ruling the city.

Fans of ninja games of the 90s will feel immediately at home in Cyber Shadow, as the gameplay feels like a combination of Shinobi and Ninja Gaiden with a some added modern polish. You begin with a sword and a jump, but gain plenty of skills as you progress. It can’t be understated how well Shadow controls, with incredibly responsive controls that just feel ideal for the challenging levels. 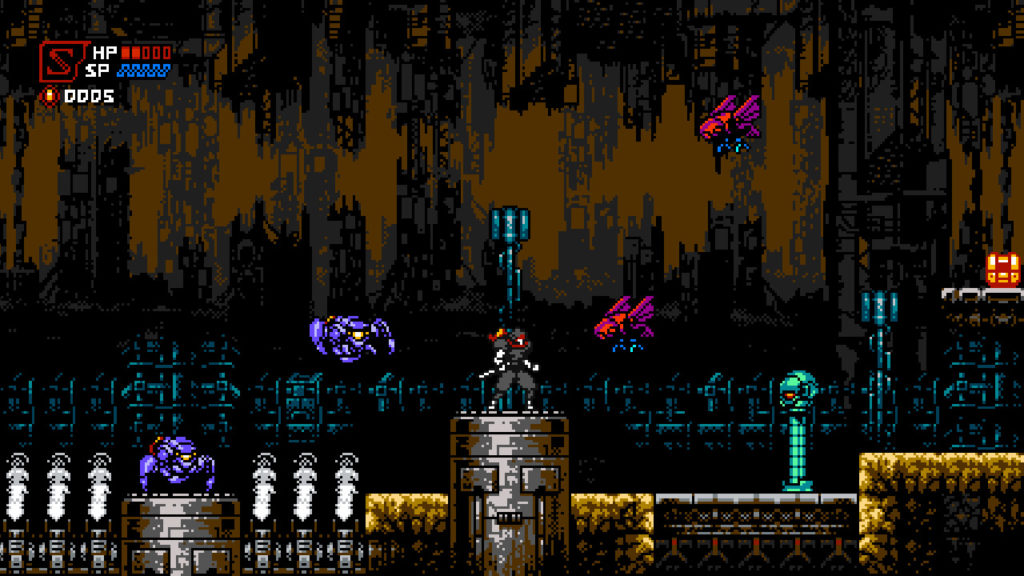 Each of the linear stages you’ll have to tackle is packed full of enemies, with a boss fight to overcome at the end. There are spikes, trash compactors and massive laser beams you’ll need to dodge to keep your health bar topped up, but the selection of robots firing lasers your way are an even bigger threat.

Learning the behaviour and attacks of each metallic menace goes a long way to ensure your survival, and there’s rarely a better way to get past an enemy than to slice them into pieces. Some will rush in for a swift melee strike, while others fire barrages of bullets at an unsuspecting Shadow. It’s up to you to read the situation, and react accordingly.

Once you build up an array of ninja weaponry and abilities, dealing with foes and navigating stages becomes even more enjoyable. You start by receiving simple throwing stars and a pogo attack, but by around the halfway point of Cyber Shadow you’ll be able to use a teleporting dash attack and deflect bullets. You feel like an absolute badass once you have access to your full arsenal, and nothing feels better than chaining from enemy to enemy in an aerial flurry of offense. 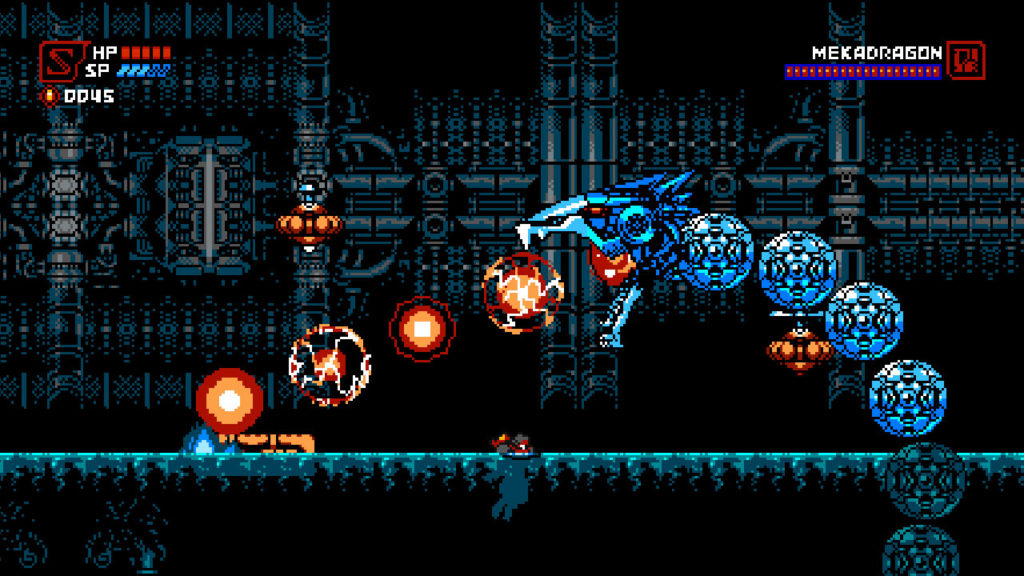 Surviving long enough to unlock exciting new abilities is easier said than done though. Cyber Shadow is unapologetically difficult, and is retro in both difficulty and aesthetics. Spike pits can kill you in one hit, and enemies can end you in second, but it never feels frustrating thanks to unlimited lives and a clever checkpoint system.

As you destroy enemies and containers you pick up currency, and this currency can be used to power up checkpoints. You can spend money to upgrade a checkpoint to restore all your health when you respawn, all your magic power, or even drop a power up any time you return there. It’s a tricky balancing act to keep the coffers full and be able to progress, but it’s nice to have the option of powering yourself up a bit when you’re in a pinch.

I generally took advantage of this handy spawn point buff before one of Cyber Shadow’s intensely difficult boss fights. Some bosses are screen filling behemoths with limitless attack power, while others are epic clashes with similarly sized mechanised masters. Learning some attack patterns and figuring out when to launch your own strikes is the name of the game here, but don’t be surprised if it takes you more than a dozen attempts to see success. 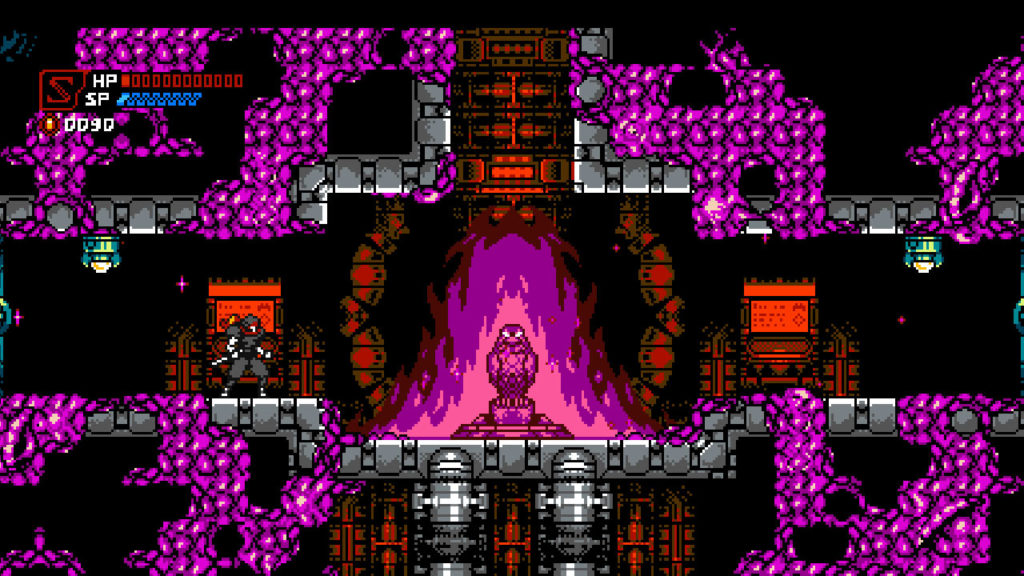 If you’re really struggling with a tough boss, you can power up even more by replaying past levels. Each stage has a selection of secrets to find, containing orbs that increase your max health or magic. These often can’t be reached without bringing powers unlocked later, so there’s an incentive to come back again and power through an old level with your new kit.

It’d be a crime if I didn’t talk about the 8-bit aesthetic and chiptune soundtrack. The urban setting is brought to life with detailed sprites for friend and foe alike, and the soundtrack is something else. I honestly don’t think I’ve enjoyed chiptune music this much since Megaman 3, and every time I beat a stage I got excited to hear what was coming next.

Cyber Shadow is a superb action platformer, that feels just how you remember the best NES games felt. Controlling Shadow feels perfect, the soundtrack is exquisite, and there are some phenomenal powers to unlock. If you’re able to cope with the serious challenge of taking down a robot army, then Cyber Shadow is a must play title that absolutely deserves to be mentioned alongside Shovel Knight as an all time great.

High difficulty level will put some off

With perfect controls, epic boss fights and a banging soundtrack, Cyber Shadow is a superb action platformer that you don't want to miss.