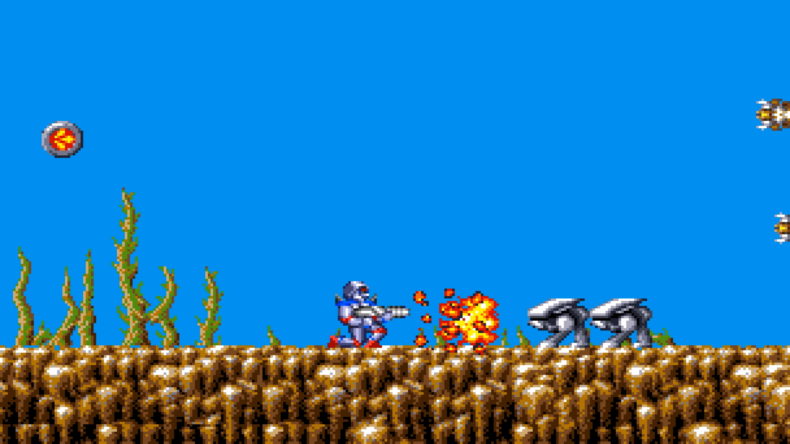 Back in 1990 I was an arcades and Japanese consoles obsessed lad just into double figures, who had to rely on my trusty Commodore 64 to deliver ports of the coin ops that guzzled any pocket money I was given. Manfred Trenz and his musical genius pal Chris Huelsbeck had already had a hand in the controversial Great Giana Sisters, a sterling port of R-Type, and its terrific homage Katakis, but it wasn’t until Turrican dropped that I felt like I was playing something that could truly stand alongside the stuff I was playing in my local shops and arcades. Trenz had taken influences from Data East mech shooter Psycho-Nics Oscar and Nintendo stalwarts like Metroid and even Super Mario Bros, and designed a pant-wettingly smooth, multi-directional run and gun classic – and the C64 version could live with more powerful Amiga counterpart, and then some.

I played it to death. I got an Amiga 500 and played its sequel to death too, but at this stage I had progressed to the consoles I once yearned for, and the trusty disc drive was phased out until Sensible Soccer and Champ Man came along. Turrican went on to spawn its own console versions of Trenz’s robot masterwork, and we find a couple of them nestling in this collection along with the first two games, in their Amiga incarnation. What you quickly realise in 2021 is that there is a disparity between the quality of the original home micro pair, and the console versions that came after. 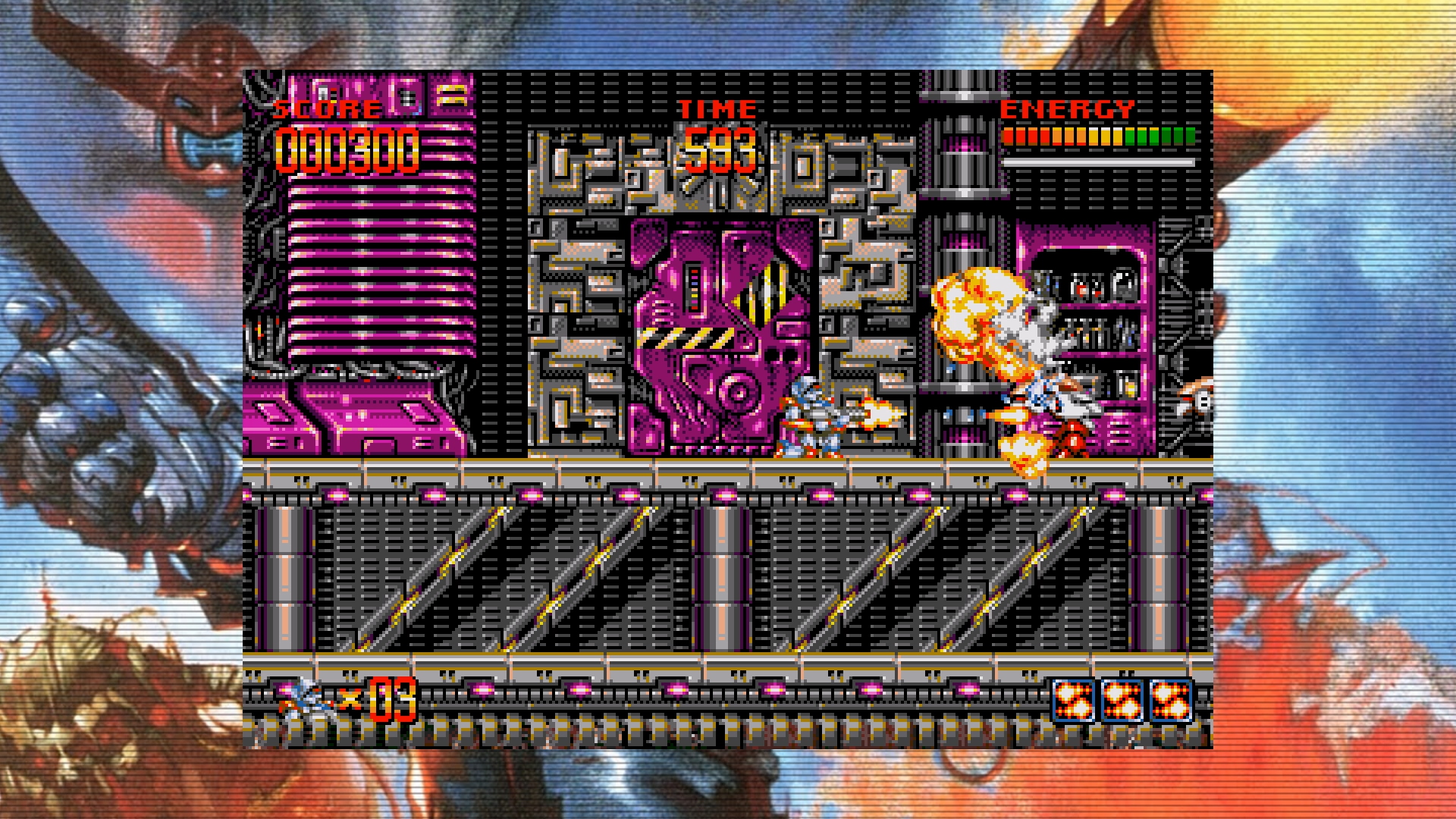 The T1/2 design team had given way to Factor 5, and the feel of the Super and Mega sequels is very much a dated, European vibe, with colourful graphics, excellent music from Huelsbeck, but gameplay that doesn’t stand the test of time, and couldn’t cut it even back when the Mega Drive and SNES were already home to stellar platform shooters and run and gun fare like the Contra and Shinobi series, or bangers like Hagane and Strider. Super Turrican comes off best, as it retains the multi-directional laser of the original, as opposed to the Bionic Commando style grappling hook beam employed in the Mega Drive version. Both console games look nice – but the magic of the original titles was gone.

That magic is still undeniable when it comes to the first two games in the franchise. Even 31 years on, the original still delights with the depth of its platform-shooter gameplay, from the opening digitised speech that welcomes you, the Manowar inspired title screen, and the fact that if you are a certain age, you instinctively run backwards at the start to grab that hidden 1UP, and the first Super Mario Bros style block that spews out power ups when blasted. The non-linear gameplay is still a lot of fun, and a real challenge. But it was trumped in almost every department by its superior sequel, which acts as a kind of enhanced remix of the original, improving upon the visuals, and adding a premium layer of arcade wizardry, Trenz going back to his roots in hori-shmups with blistering sequences where you transform into a spacecraft and enjoy some smooth side scrolling blasting straight out of the Katakis/Denaris playbook. 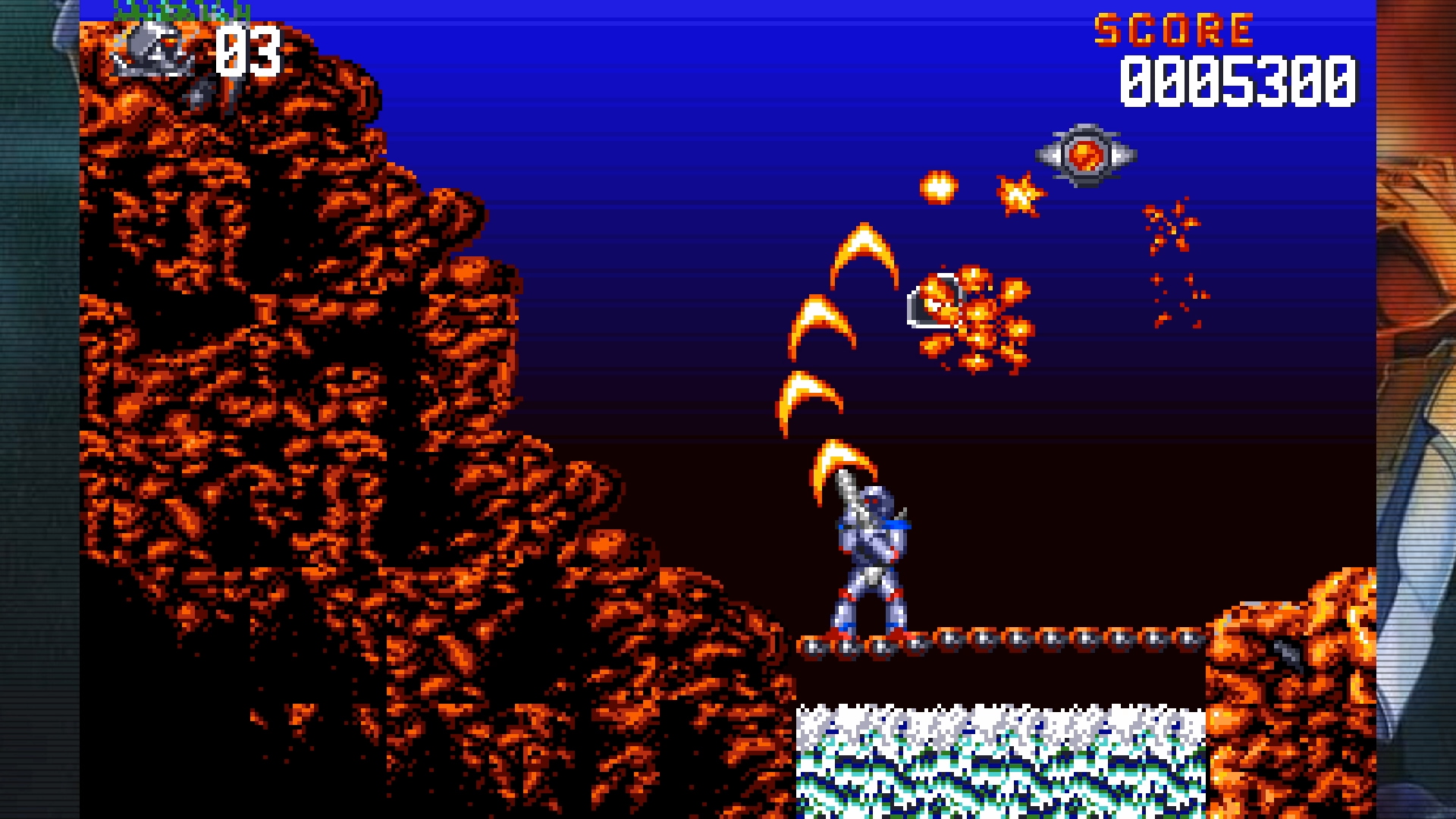 Turrican Flashback doesn’t do a lot with the retro games on offer, apart from the addition of some emulator standard rewind and save state options (a boon given how bloody tough these games all are), some wallpapers, and display tweaks. There are no visual overhauls or remakes, just the classic games presented professionally on your Switch (or PS4) screen. The one very welcome change from the source material is the control scheme, which allows you to access the many side weapons, the Metroid-style ball transformation, and your arsenal of grappling hooks and lasers using the buttons on your controllers. This may sound like par for the course in this day and age, but it gives old timers like me the chance to experience the early games without having to rely on a combination of button presses and keyboard inputs. Back in the day I have a clear memory of a pal and I playing Turrican in “two player” – me operating the movements of our mutant robo-badass, and my co-pilot pressing the space bar to unleash hell with the array of screen clearing attacks.

Considering what is included in the package, the pricepoint is perhaps a bit steep. Only die-hard fans would fancy tackling the latter two games in the package, and they do not stand up at all well, offering generic experiences that were eclipsed on their platforms tenfold, and lacking the sparkle of their predecessors. I was disappointed that the C64 and NES versions have been omitted, as I think they have something to offer and all play well enough to warrant exploration in this package. Given the games were originally birthed in such an exciting and interesting time in the industry, some extra goodies like artwork, development history, the option to listen to Huelsbeck’s cracking soundtracks independently, or just anything to make this compilation feel something other than four games wouldn’t have been much to ask, and would have appealed to people like me who still remember Zzap magazine.

Original two games still decent
Amazing soundtracks across the board

Lack of content
Mega and Super just not very good

A compilation of some good and some average games, but given the historic nature of them all, it'd have been nice to see a bit more effort put into this package.