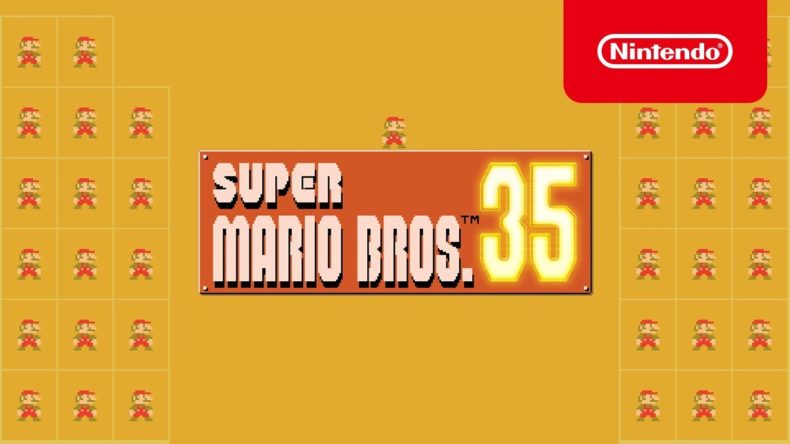 Super Mario Bros 35 is a fun and frantic take on the classic 2D platformer we all know and love. Taking its inspiration from Tetris 99, you’ll be facing off against 34 other players for Super Mario Bros supremacy. Doing well in your game hinders other players and vice versa, so knowing what to do can be the difference between languishing in mid-table and vying for overall victory. We’ve compiled some Super Mario Bros 35 tips to help you reach the top of the leaderboard. 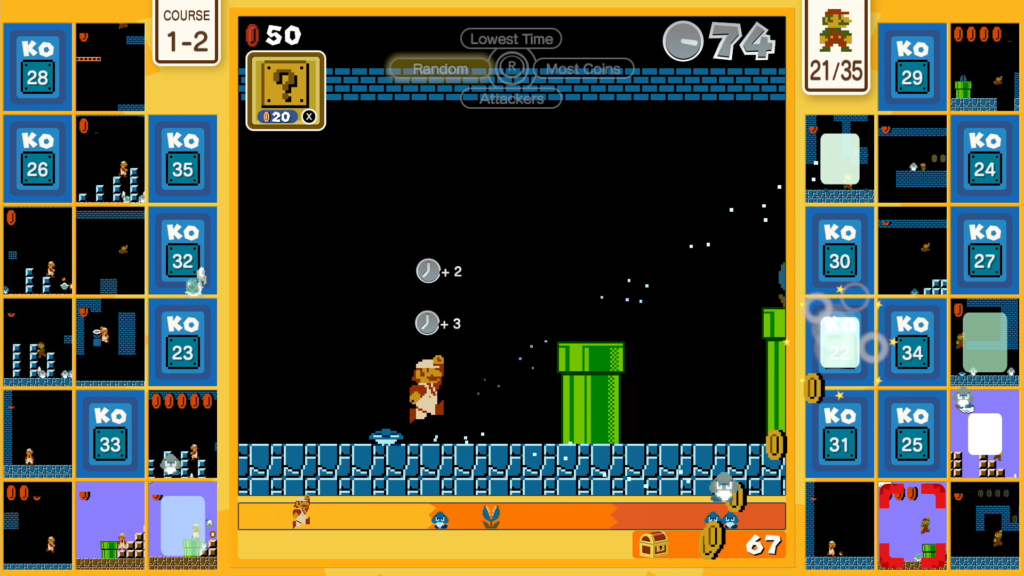 Like all Super Mario Bros levels, you’re up against the clock, but in Super Mario Bros 35, you can actually manipulate it to your advantage. Killing enemies will net you a boost to your timer, which you must keep topped up in order to stay in the game. Killing combos of enemies boosts how much time you accrue also. There are also additional bigger time bonuses awarded for finishing a level too.

As such it’s important to be quick about things and make sure you are looking out for opportunities to increase your timer where possible. If you can build yourself a time buffer it’ll help when things get hectic later on and you need some time to think and plan ahead.

2.Enemies are your friend 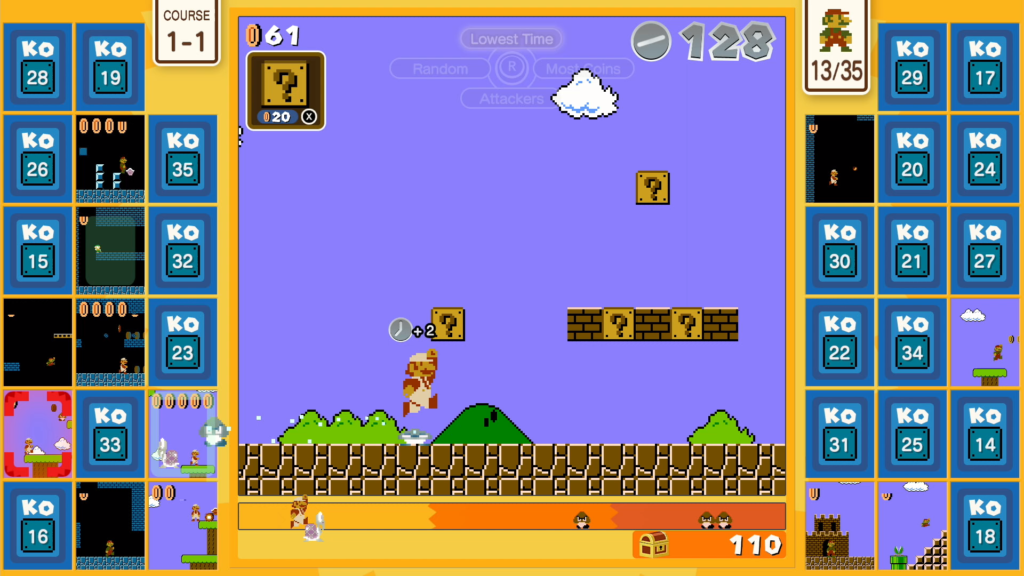 Goombas, Koopatroopas, and the like were the bane of Mario’s existence back in the original Super Mario Bros game, but they are a key to victory here. Killing enemies rewards you in more ways than just adding to your timer. Killing an enemy sends a ghost version of that enemy into another player’s game. More enemies means more obstacles to overcome and more chance they make a mistake and die, removing them from the game.

It’s therefore recommended that wherever it is safe and simple to do so, you should kill all the enemies you can. It keeps you alive and also increases the chance of a mistake from an opponent.

3.Look out for coins 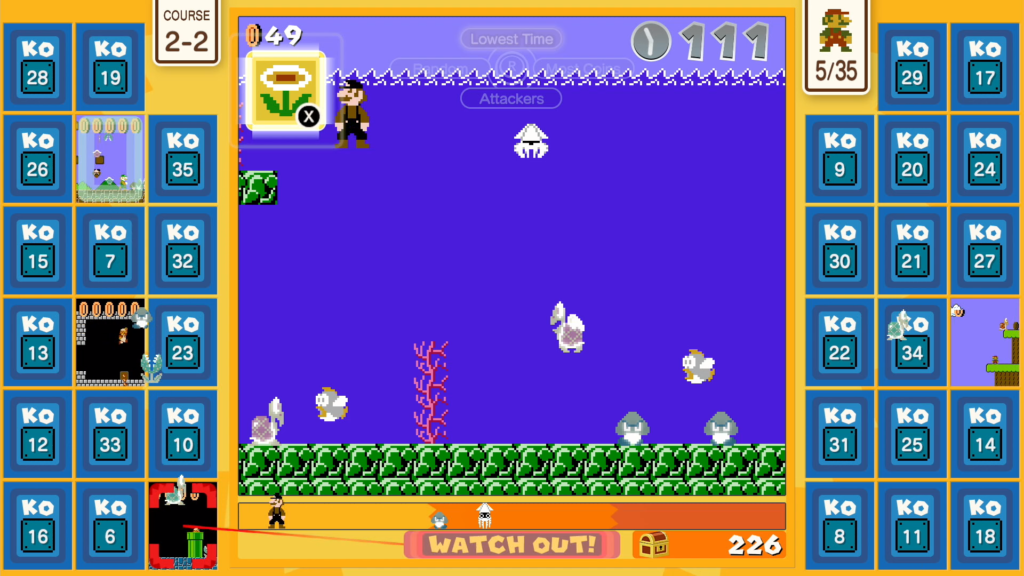 Your other consideration whilst platforming is the coins in the levels themselves. For every 20 you collect you can exchange them for a random powerup. A Mushroom, Fire Flower or Power Star could be automatically applied to Mario to give you a boost. Alternatively, you could be rewarded with a Pow Block that will wipe all the enemies off the screen for you.

It’s always advisable to grab coins as you play through the levels, as long as doing so doesn’t put you in unnecessary danger. But there is some skill to when to spend them too. Don’t always be tempted to use them when you’ve amassed 20. If you’re already Fire Mario, it’s highly unlikely a new item will put you in a better position, except for maybe a Star that lets you go on a killing spree but that’s highly unlikely. Save it for when you’re small Mario to guarantee the bonus improves your current position, just note it can take a few seconds to select your item, so don’t do it if you’re in immediate danger. 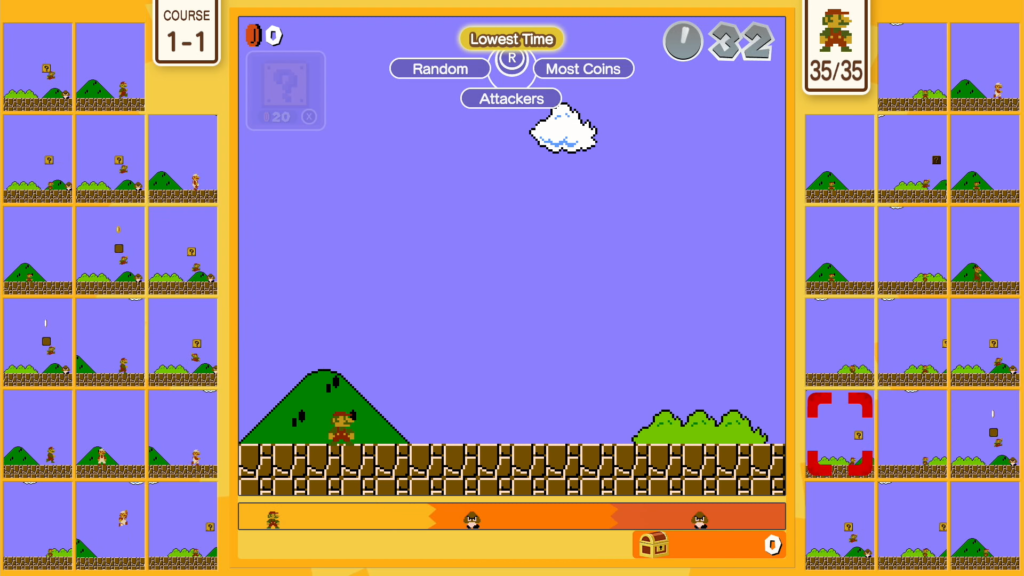 Like with Tetris 99, you have control over who is on the receiving end of all your ghost enemies. You can either manually control which player you are attacking by selecting their screen with the analogue stick. Or, as with Tetris 99, there are some preset attacking options that take the worry from your mind.

You can either choose “Attackers” which will direct enemies back at those that are attacking you, or you could select “Lowest Time” to focus your attack on someone who is struggling with spare time. Hopefully, your additional enemies will push them to failure, resulting in one less opponent to worry about.

You could also select “Most Coins” which will target the player who has amassed the most coins to try and force them into spending them and thus reducing their advantage over players. Alternatively, you could just select random and punish various opponents indiscriminately. It’s up to you, but perhaps the best strategy is “Lowest Time” given it can have the most direct impact on dumping opponents out the game. 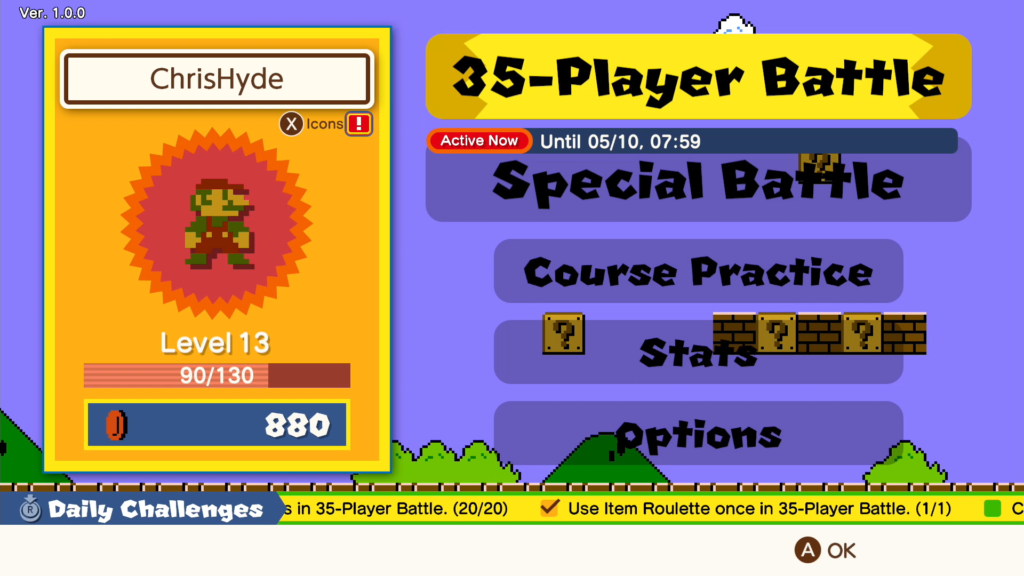 Perhaps one of the most obvious but overlooked of our Super Mario Bros 35 tips is to practice. There’s a designated “Course Practice” mode where you can run through the original levels to remind yourself of the layout. Now whilst they won’t have swarms of ghost enemies added into the mix, this does give you an opportunity to familiarise yourself with those old classics.

It’s worth trying to memorise where coins and power-ups are hidden in the levels so that you’re not exploring arbitrarily when you play. The last thing you want when you have 10 enemies on screen is to be unnecessarily jumping at blocks, searching for coins that aren’t there. There’s no shame in it, and the levels are still immense fun to play too so there’s no downside.

6. Give yourself the edge 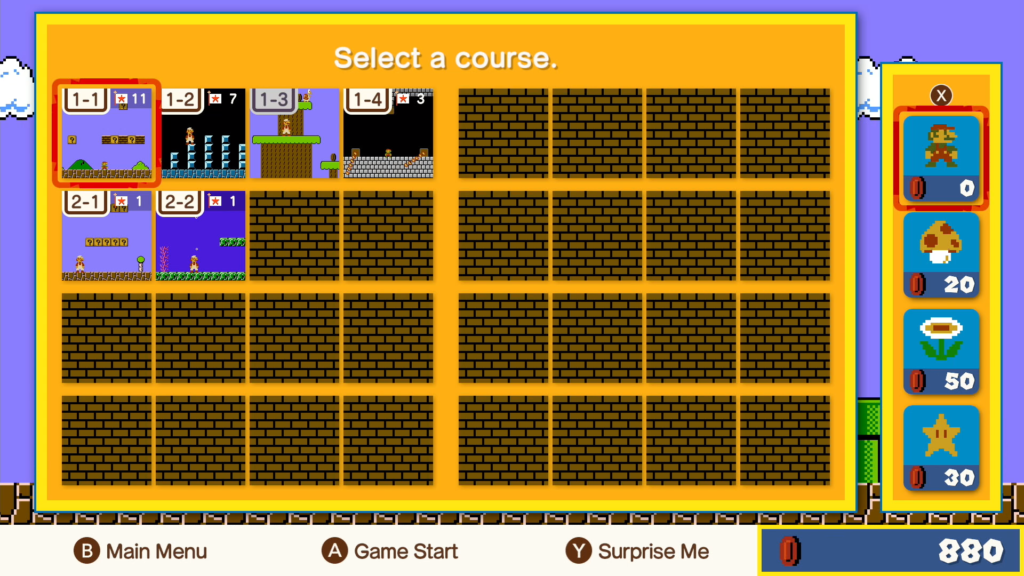 The coins you collect in-game get added to your overall collection, giving you a nice ever-growing kitty. You can spend these on one-off power-ups to start a game with to give you the edge. A Mushroom is 20 coins, whereas a Fire Flower is 50 coins. To start with a Power Star is 30 coins.

If you’re looking to spend coins in this way, I’d recommend the Fire Flower every time. Yes, it is the most expensive, but it gives you two hits before you die, and being able to shoot fireballs means you are better equipped to deal with additional ghost enemies on screen. 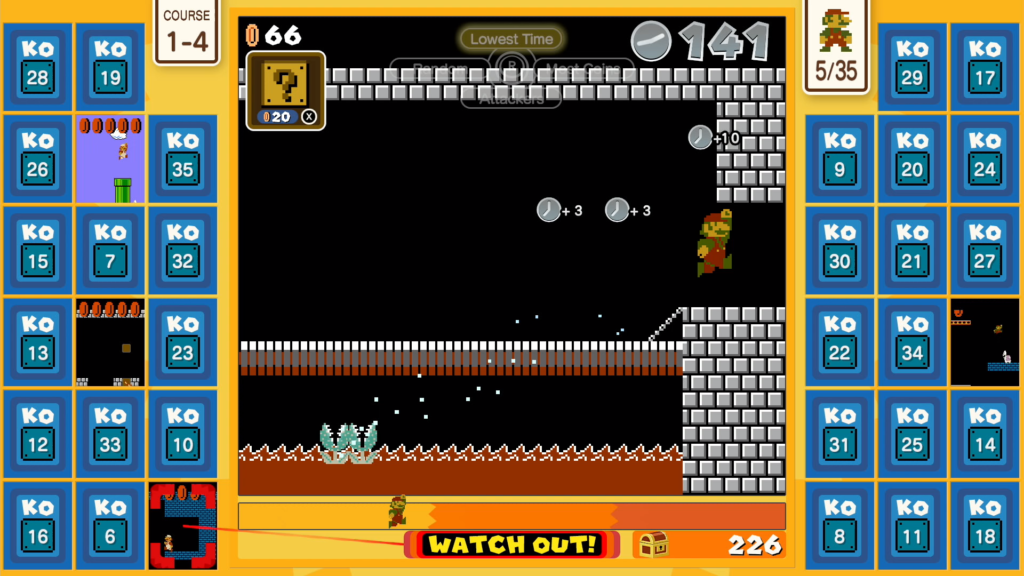 Where possible always try to get to the later levels instead of replaying the easiest ones. Playing later levels means you can take out more awkward enemies like hammer bros or spinies, and defeating them sends them to your opponent. And let me tell you, having to fend off four hammer bros will test even the most expert player if they don’t have a fire flower. You can even have Bowser popping up in enemy levels if you beat him in his castle levels!

8. Grab the 1up and duplicate power-ups 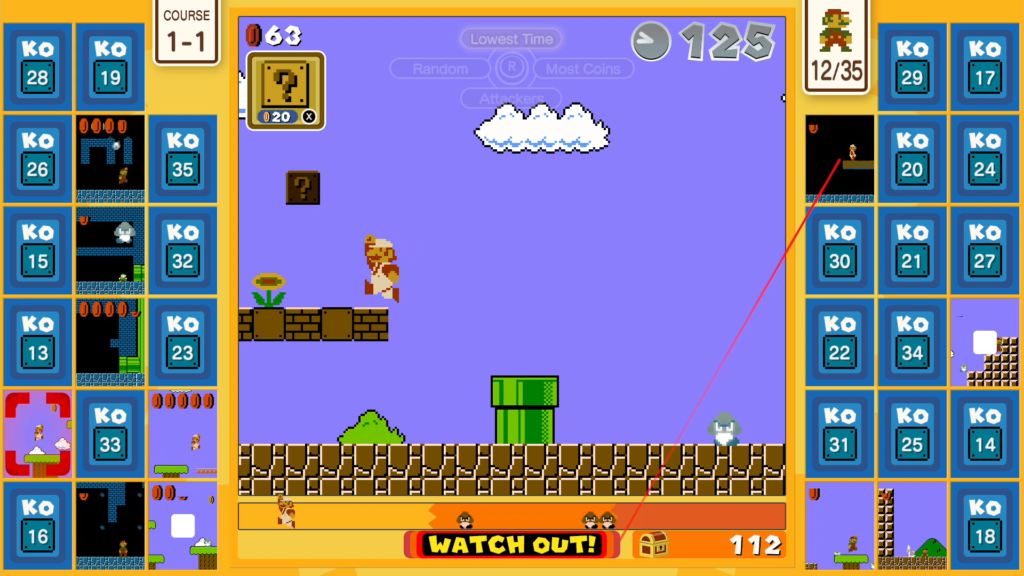 Every level in Super Mario Bros has a hidden 1up. Learn where it is and grab it every time for an easy 20 coins. That’s a free power-up for when you are in trouble for just getting a simple 1up every time to race through course 1-1.

Likewise, make sure you nab duplicate fire flowers as they will get you a decent chunk of bonus time to keep your run going. All the more useful when you reach the end game and the timer goes red and counts down at a scary pace.

Hopefully, our Super Mario Bros 35 tips help you out and before long you’ll be claiming victory in this fun and crazy title.

A Newcomer’s Guide to staying alive in Resident Evil 2

Destiny 2: The Dawning Guide – How to bake all of Eva’s treats and where to find the ingredients