previous
Ghost Recon Breakpoint has already given us plenty to be excited about
random
next
Monster Hunter World: Iceborne has a release date
2 comments 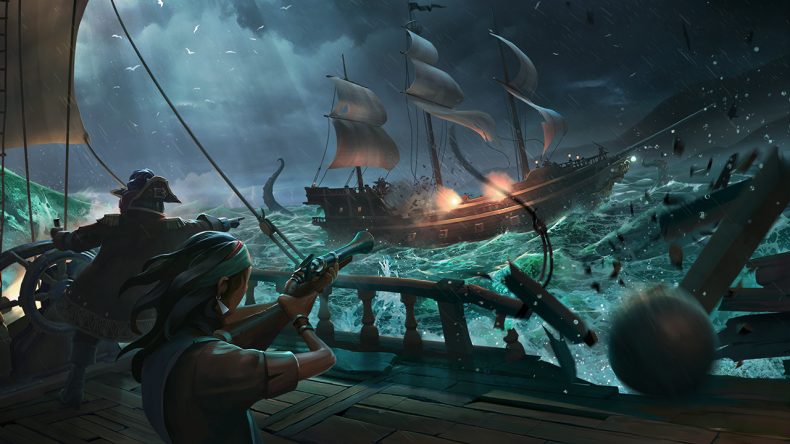 Our guide to the Sea of Thieves Tall Tales continues below with Part Three.

This tale is picked up from Madame Olive, the representative for the Order of Souls based at Sanctuary Outpost. These are the journals of the young lovers that Madame Olive has asked you to locate.

JOURNAL #1: I WANT TO FIGHT! BY ROSE
This first journal is located on Rapier Cay next to some barrels in the middle of the island. She was following us again all day. I could see her sails on the horizon. Just out of reach of the cannons. COWARD. I knew I wanted this life. Ever since I fell from my parents’ sloop as a nipper and got saved by Captain Briggsy herself! She looked me up and down and said I was going to be the sort of pirate who never let danger scare her away. And thanks to her I never have. But they all say it’s still too dangerous to take on Rooke. I guess to keep George happy I will just keep writing my feelings down instead of wasting all our ammo. Ugh. I wish things were simple again like they were back at Cannon Cove...

JOURNAL #2: HE WILL GET HIMSELF KILLED! BY ROSE
This second journal can be found on Cannon Cove under a barrel next to the campfire in the small bay of the island. So we’re at Cannon Cove and there’s just gold sat there like a big dumb trap for idiots. Guess who runs rights up to it and gets jumped by an enemy crew lying in wait? YUP! I had to fight all four of them myself. Lucky I had Georges sword and mine also. I was angry though so it was an easy fight. He never realised it was him I was mad at. Let’s see if we can make it to Lone Cove without me strangling him. I say it’s 50 – 50.

JOURNAL #3: I THINK I LOVE HER, BY GEORGE
You’ll find this journal at Lone Cove on the eastern side of the large rock in the middle of the island. We have stopped to rest on our way to the Lagoon of Whispers, but the only whisper I can hear is echoes of the question. Asked so plainly, the shock of it has completely dulled my senses, and I’m still no closer to the answer. It’s like that game where children pull petals off flowers one at a time. She loves me, she loves me not. Although it’s more like… I love her, I love her not, I love her… I love her… I… Oh dear.

JOURNAL #4: A KISS AND A MISS, BY GEORGE
Head to the Lagoon of Whispers on the eastern side of the island to find this journal sitting on a barrel. Only the Captain’s Cabin affords any measure of privacy on a galleon such as ours. I knew that if I were to act, it would have to be while we returned aboard our rowboat. I leaned closer. Rose tilted her head, quizzically. With my heart in my mouth, I moved nearer still… My oar struck a sandbar just then. We touched! Or rather, collided. Rose’s forehead; my (now rather bloody) nose. I am dismayed, but not defeated. Once Quickshot is returned to the soil and we reach Sailor’s Bounty, I shall try my luck again…

JOURNAL #5: HE PROPOSED! BY ROSE
The final journal for this Tall Tale can be found on one of the small Northern islands that make up Sailor’s Bounty. It is next to a pile of barrels. Today has been one of the best day of my life and one of the funniest too. My sides still hurt! George had been thinking (too much) about how to propose to me. Where to take me and how to stand and what to say. Too bad he forgot to look where he was walking! He turned and said “Rose will you marry aaargh!” He fell into a tree and got stuck upside-down swinging all day! Until we chopped it down anyway. Ha ha ha! Laughing again. But of course I said yes anyway. As if I could refuse my George after all of that!

TALL TALE #6: THE ART OF THE TRICKSTER

To pick up this tale you will have to locate Salty, the skeletal parrot from the Cursed Sails expansion. He is no longer located in the secret workshop on Wanderer’s Refuge, instead you will need to head to Plunder Valley and you will find him there near the wrecked ship next to a campfire on the eastern side of the island. These journals are all about the Trap maker.

JOURNAL #1: THE PERFECT TRAP
This journal is on Plunder Valley in the cavern. You can find it resting on the central rock inside the cave. Even while being forced to work against my will – and don’t think I don’t know which bird-brain is responsible – I still have my pride. As the greatest Trapmaker the Sea of Thieves has ever seen, I must devise something brilliant to protect an equally brilliant treasure. How, then, shall I prove the effectiveness of my creation? Why, by using a few greedy, grog-addled gold-diggers as guinea-pigs! I shall begin my experiments upon Discovery Ridge. A few barrels packed with gewgaws should entice pirates into my game…

JOURNAL #2: BAIT & SWITCH
As the journal on Plunder Valley suggests, you will need to head to Discovery Ridge. The Journal is located up high on the north western side of the canyon resting on a barrel near the one of the Trapmaker’s white marks. My first test relied on the curiosity of the participant. First, I primed the location with some supplies that might attract a passer-by. Next, a simple wooden lever was placed by the barrels. When utilised, it would strike a flint and so ignite a hidden powder-keg. I had rather assumed natural whimsy would see the lever pulled once spotted, and tucked myself away to observe what came next. The first pirate to arrive promptly wrenched my lever from its housing and absconded with it. “Nice hat stand”, I heard him remark. Subterfuge bests psychology when dealing with such avaricious crooks. I shall return to my workshop, and to the drawing board…

JOURNAL #3: MAKING MY POINT
The last three journals are all located in the Trapmaker’s workshop, which can be found on Sailor’s Bounty. The first of the three is resting underneath the workshop desk. Recently, I’ve been testing different kinds of blades to see which are the most useful for ‘deterring’ intruders. I’ve had some success with sword traps, as they look fearsome and have an excellent range. They’re expensive to make, of course. Saw traps use shorter, duller metal blades, and are definitely useful in confined spaces. Still, they lack a certain style… Or should I go back to the tried-and-tested “wall o’ stakes”? Though primitive, you can’t argue with the classics. Decisions, decisions…

JOURNAL #4: WE WANT PLATES
The next Journal on the list can be found next to the Anvil in the workshop. Some experimentation with weight and counterweights have allowed me to devise a new trigger, as well as protection for my workshop. Even working with wood, for metal is precious and in short supply, I can use the weight of any intruder to spring a nearby trap. As sensitive as these devices are, it is nearly impossible to disguise them entirely. Thus, they are best deployed in darker areas. Unfortunately, I have been unable to completely muffle the noise made by the mechanism when someone blunders onto it. A cunning criminal with sharp ears might, I suppose, get enough warning to save their own skin. Regardless, I am making progress…

JOURNAL #5: A WORTHY OPPONENT
The final journal for this Tall Tale can be found lying underneath the Trapmaker’s bed. The more time I spend with Briggsy, the more I wonder if all pirates are ultimately fated to be consumed by their own greed. Is the endless pursuit of gold and glitter, in and of itself, the greatest trap of all? As an experiment, I have decided to leave a trail that will lead to the very treasure I have been commanded to protect. They’ll be devious clues, of course. Ones that goad, deliberately mislead and test the mettle of those who read them. One last game, then, winner takes all. Is there someone out there on the Sea of Thieves worthy of the stone? We shall see…

Likes to shoot stuff and wear pretty shoes. Is a BEAST at Titanfall.
MORE LIKE THIS
GuidesHints and TipsMicrosoftRare