previous
Rock of Ages 3: Make & Break Preview
random
next
A complete guide to every character in Bleeding Edge
9 comments 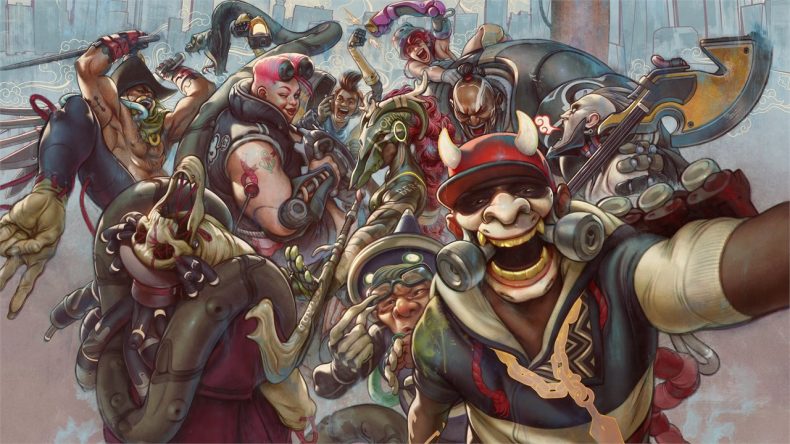 Starting out in Ninja Theory‘s crazy brawler Bleeding Edge can be a daunting task. There are different matchup possibilities between the different characters, stages, and abilities. It’s easy to feel disheartened if you don’t start racking up the wins immediately. But have no fear, here at God is Geek, we’ve got you covered. Our guide below lays out some great Bleeding Edge tips for beginners to give you the edge. Before long you’ll be on the road to victory in this new “Hero Brawler”. The single most important key to survival in Bleeding Edge is that there is strength in numbers. It’s almost impossible to win a fight against two foes on your own, and it’s often better to wait for teammates to respawn than bother rushing to an objective alone. Even a tank can be easily disposed of by multiple opponents, so don’t think you’re invincible because of that high health pool.

The composition of your team is incredibly important if you want to beat the opposing 4 players. A team without a healer might as well not be playing, and even then a team with only the hybrid Healer/Fighter Miko will probably need another support option. Learning at least one of the healing characters asap will lend itself to helping your team composition greatly. This will probably seem obvious, but if you’re a healer it’s even more crucial to stay with teammates. On the other end of the spectrum, it’s important to protect your healers. Always protect them, they are so precious. If your healer dies then it’s pretty likely that you’ll follow them.

The dojo was designed with this in mind, but in Bleeding Edge practice really does make perfect. You can customise the dojo to have both stationary and aggressive AI heroes, of both allied and enemy nature. Spending 15 minutes getting accustomed to a new character in this controlled setting, will ensure that once you jump into an online match you know what you’re doing.

The easiest characters for beginners are the Tanks. The extra health at your disposal means you’ll get more time to practice your parries and dodges, and they are all fairly easy to understand (with maybe the exception of Makutu).The sooner you learn to evade and parry with perfect timing the better, as there will be plenty of situation where avoidance and escape are your only option. Learning each character’s attack rhythm, so you can parry and dodge effectively, will help you keep your precious health.

Finally, it can be tempting to use your super move as soon as it becomes available. The majority of these special attacks have the perfect time to activate them against your unsuspecting opponents, and if you die you don’t lose your super meter. Some super moves require an open space, some are better in big crowds, and some can turn the tide of battle and help your team capture a clutch objective – so try to get the most value possible out of these powerful ultimate abilities.

Ideally, you’ll be playing Bleeding Edge with a team of friends on a headset. If you aren’t willing to talk on a headset with whoever you’re playing with (firstly I don’t blame you if it’s randoms) then make sure to communicate with the in-game system. You can ping objectives, enemies or even use generic commands like Group Up. Letting your team know what you’d like them to do, and what to focus on can make all the difference in a close battle. Making use of environmental hazards in combat can really help you dispatch enemies. Almost every map has some form of trap or hazard that you’ll need to avoid, but can use to your advantage. There are trains that plough through anyone in their path, electric barriers, and even activatable fire pads. Trapping an enemy (which one of many stun abilities) in the path of a train, or launching them into fire can damage (or even instantly kill) foes.

The mod upgrades you unlock as you level up characters can provide handy little boosts to an ability you prefer. Making an oil slick buff your team, or an ability absorb health can make a character perfect for your play style. You can set up to 3 builds for each character, so if you’d like one build focused on damage and another on survivability you can switch mid match. If a mod isn’t something you would benefit from, they can also be recycled for currency to spend on a better one. You’ll only get the credits for a fifth of the cost of a mod when you recycle, so if you think one could in handy later it’s not worth the overall loss.

6. Weigh up your options

Sometimes it’s not worth worrying about objectives, and instead helping your team eliminate enemies. Afterwards you can capture the points without contention, or in a game of Power Collection, even steal their Power Cells when they die. Sometimes however, it’s better to sneak to an unclaimed objective to boost your team’s score. Especially when you’re close to victory, sneaking in a few extra points means you’re much more likely to secure the win than starting a fight you could potentially lose. With a little trial and error you should be able to decide which path to take (although sometimes your team will decide for you).

Whichever path your team decides to take to victory, arriving into the thick of it as soon as possible is key. Mounting onto your Hoverboard (or your characters equivalent) to get to an objective quicker might seem simple, but it’s worth remembering to do it regularly. Even over short distances, it’s usually worth whipping out your board to save a couple of seconds.