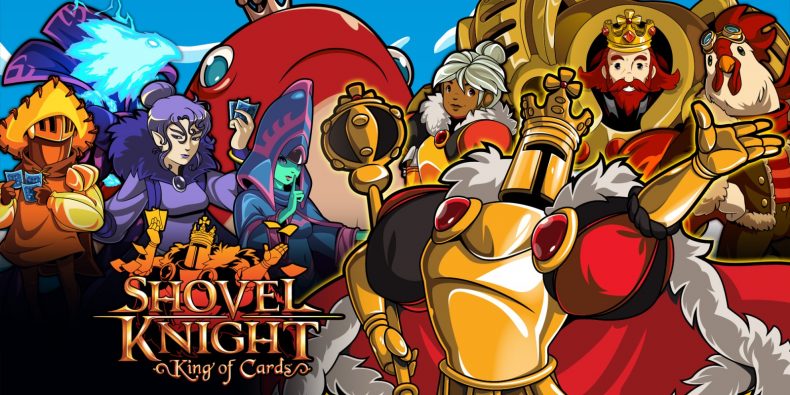 If you’ve played Shovel Knight before, you’ll know what to expect with King of Cards. This is a prequel that takes you back to where the story began with King Knight’s rise to the throne, including familiar faces and locations from previous adventures. It’s familiar to the point where the game also assumes you have played prior adventures in the series. There’s no tutorial to speak of at all, the game just throws you straight into the action. But that’s no bad thing, because this strategy of presenting you with situations, but not being explicit in how to tackle it forms the basis of the game’s charm. Each screen you have to traverse is a mini-puzzle of sorts. King of Cards is challenging you to tackle it with a mixture of common sense and trial and error.

The fluidity of the movement if anything feels better than the previous games. As King Knight, you’re in charge of his gorgeously slick moves. With his jumps, shoulder bashes, and spinning hops, you feel equal parts the gracious dancer and the ultimate layer of the smackdown. You always feel like you’re in control, with movement flowing as it should. The button inputs feeling responsive and always acknowledge the context-sensitive moments when you need them to. It wouldn’t be a Shovel Knight title without its brand of dry humour, and King of Cards is no different. King Knight’s arrogance and delusions of grandeur provide plenty of derisive putdowns to all who stand in his way. Also, the various puns and wordplay had me rolling my eyes and bearing a wry smile in equal measure. The relationship between King Knight and his mother is a particular highlight, the doting parent schtick having been done many times before but it still seems to land the funny moments.

The main change this time around is the new card game, Joustus – not only an interesting game in its own right, but one that helps to form the entire narrative. King Knight’s aim throughout his adventure is to become the Joustus Champion. To do this he must overcome the three Champions of the House of Joustus. This card game serves as a break from the traditional platforming, shifting to mental challenges to overcome foes. Joustus reminded me of Tetra Master in Final Fantasy IX with its character cards and arrow combinations. It doesn’t play exactly the same, but requires a similar approach in terms of tactics and planning. It’s fun to play, and the fact you can see your opponent’s hand, as well as your own, adds an extra layer of tactical play as you run through scenarios in your head and counter possible strategies from your adversary.

There are entire stages devoted to Joustus that require you to beat three regular opponents before facing off against a tougher boss enemy in a battle of wits. The basics are explained well, but some of the details are strangely absent. Different card attacks and abilities, particularly in the cards you’ll discover later in the game are left unexplained. True, it follows the premise of showing but not telling from the main game. But whereas that platforming is intuitive, a brand new card game perhaps needed more of its intricacies showcasing. You could even drip-feed players throughout the game to avoid overloading people upfront. But perhaps the biggest question mark is how under-used Joustus feels throughout. Most of the gameplay is traditional Shovel Knight platforming. It feels odd with a title like King of Cards that you barely spend any of your time playing cards. Instead, you spend your time platforming towards that elusive title without ever feeling like you really earned it. Now, don’t get me wrong, King of Card’s strength is in the platforming we know and love, but if that’s the case, maybe don’t build a narrative around a minigame that isn’t a core part of the gameplay.

The difficulty feels slightly ramped up compared to previous titles, too, but not so much that newcomers will be put off. King of Cards feels very accessible, with a learning curve that almost goes unnoticed. The constant stream of new ideas pushes you just that little bit harder each time. It’s only when you replay earlier levels, you realise how far you’ve come in a short space of time. Situations that caused frustration only half an hour earlier now feel much more manageable.

Due to the solid design of each screen,  there’s always a clear path forward. Sometimes multiple screens will link in clever ways broadening the possibilities. But you’ll often know what to do, the challenge is executing your ideas. It’s fitting that your impatience and cockiness will often be the cause of death here. It perfectly mirrors the King Knight character and his self-perceived excellence often being at odds with his reality. There are a couple of areas towards the end that cause cheaper deaths, but never to the point where frustration takes over and you don’t want to push on to overcome it. And the end of King of Cards is in many ways is just the beginning. New Game+ mode and additional Feats provide challenges for those looking to become the true King Knight. Feats such as completing a level without jumping, or beating the game in just ninety minutes are there for fans of the series looking to take the challenge to the next level. In addition, the sheer number of collectibles, upgrades, and Joustus cards to collect mean there’s plenty here to keep you interested after the credits roll that first time.

Shovel Knight is back and in some ways it’s the best it’s ever been. King Knight’s move-set feels graceful and fluid allowing for level design and challenges on-screen which just feel so satisfying to beat. The controls are as tight as you would expect, and there’s plenty of humour, challenge, and content to keep you coming back for more. The only disappointment is Joustus, which felt underused and under-explained, which is a shame considering this is one of the game’s main differences when compared to the previous titles. But as an additional minigame, it is most welcome, as is more Shovel Knight for that matter. King of Cards is a worthy addition to the series that both fans and newcomers can enjoy. Shoulder barging skeletons into lava has never been more fun.

Shovel Knight: King of Cards is a glorious, flowing, challenging addition to the series. There's more to do, and more to love - and love it you will.