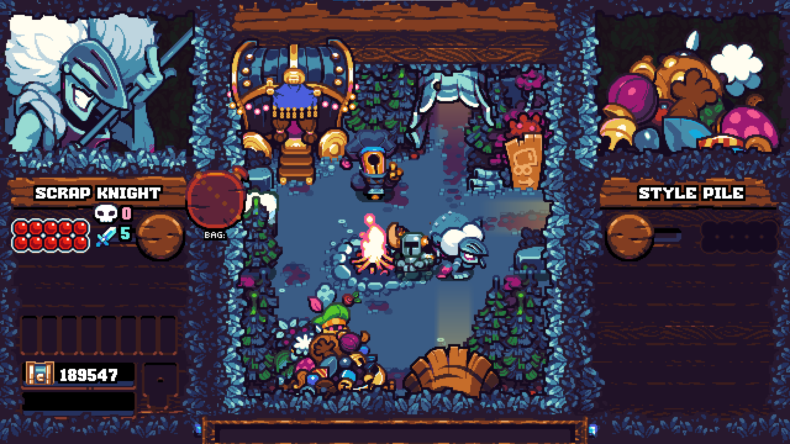 It’s a fantastic game, by the way. One of the best puzzlers in recent memory. Whether you’re playing it on Switch or on PC, it’s brilliant. Fortunately after many hours of failure, we’ve created a guide to help you with this gargantuan task.

Shovel Knight Pocket Dungeon: how to get the true ending 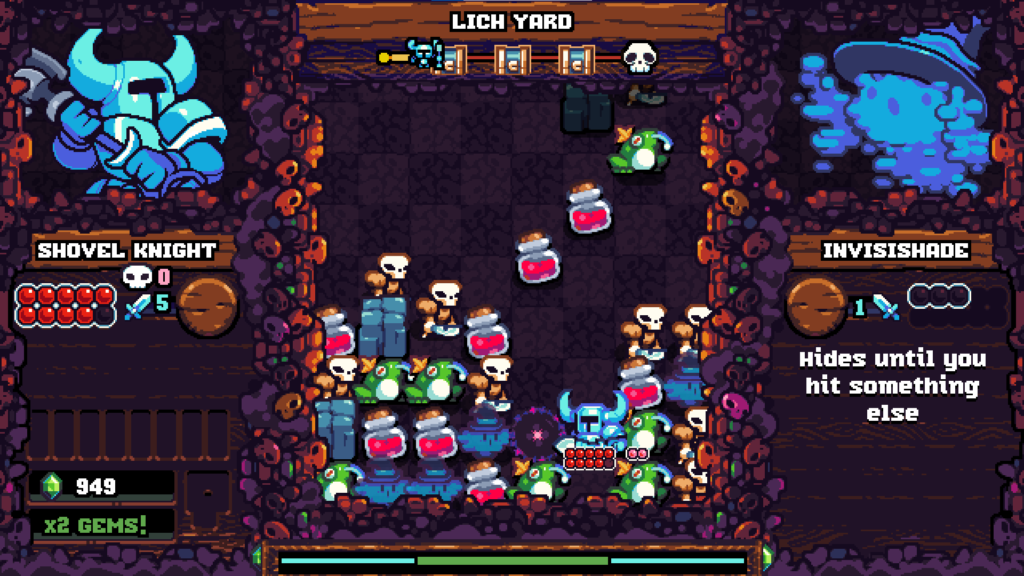 To unlock the true ending of Shovel Knight Pocket Dungeon, you’ll need to collect 4 key fragments in a single run of the game. If you’ve been playing casually you’ve likely spotted one of these swirling wormholes under a block, and met the massive skeleton within. By fulfilling his requests you’ll get access to a piece of the key. You can find him in four specific stages of your adventure.

It’s an incredibly difficult feat to pull off. So I’d recommend choosing your favourite character and really mastering their abilities before attempting it. I’ve so far only managed to obtain the true ending as Scrap Knight. Her ability to move enemies and items is incredibly helpful in the harder stages.

Where is the first key piece? 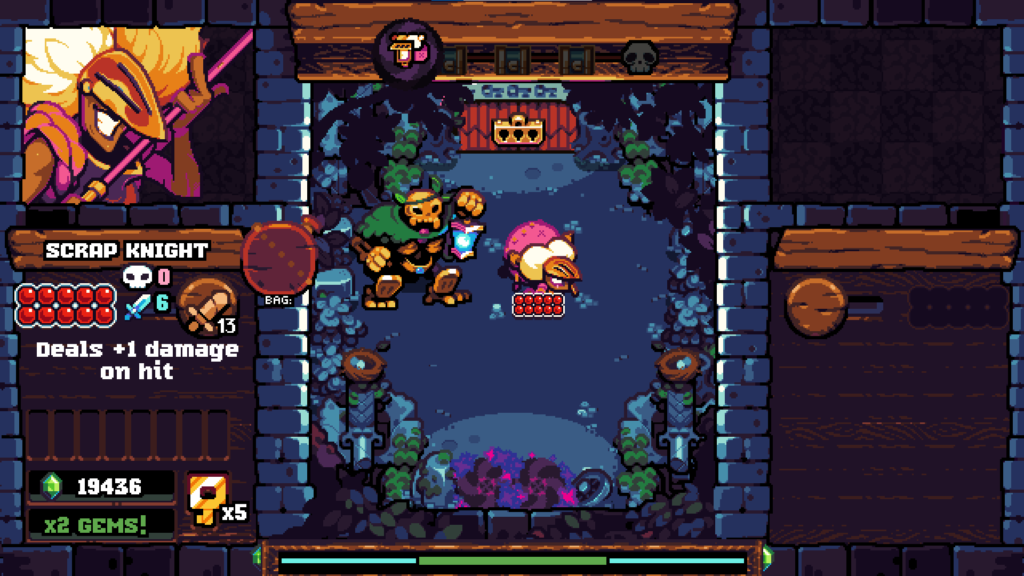 The first portal is located in the third stage “Lich Yard”. In this portal the skeleton will ask for three keys. Each stage has enough keys to open every chest you find. So you’ll need to pass up some loot to gather enough to satisfy your bony acquaintance. I find that stage one is usually simple enough to survive without any power ups from the chests. That is, so as long as you don’t accidentally open a chest the first piece should be easy.

Where do I find the other key pieces? 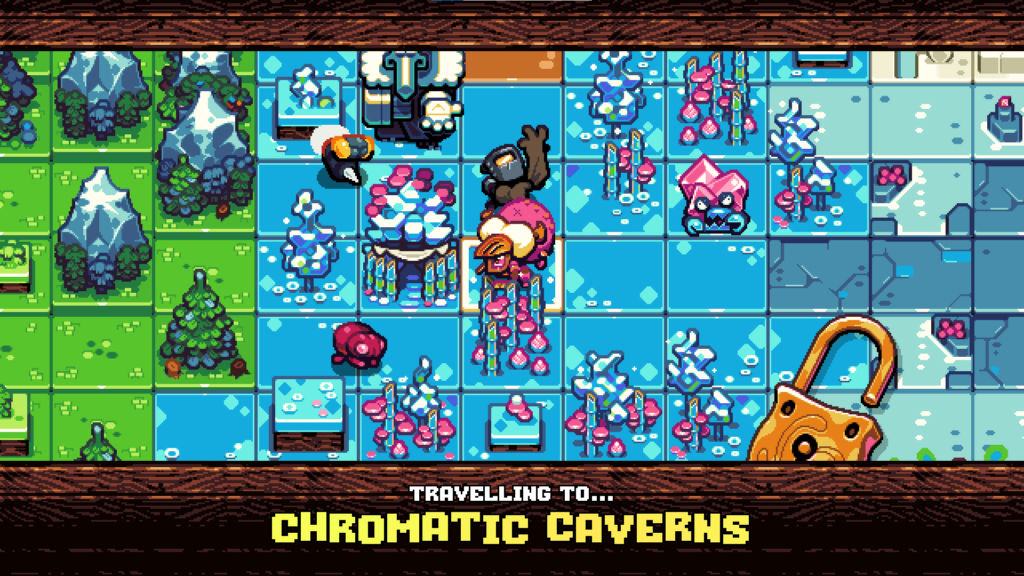 The second key piece is found in stage six “Chromatic Caverns”. This time (once you find the portal) the skeleton will ask to permanently remove one of your hit points. If you’re playing as a character that starts with low health, you’ll need to make sure you’ve bought a meal ticket or two from the shop if you want to survive the run. 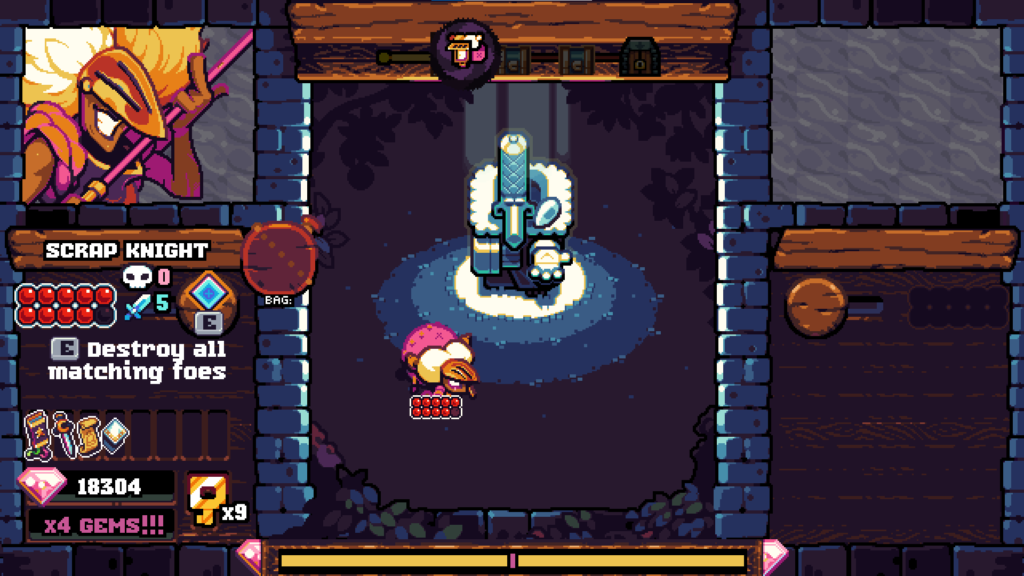 The third of the precious key fragments is found in the eighth stage “Stranded Ship”. This time you’ll need to have stocked up on cash to open up the key shrine, with 20,000 gems required. As long as you don’t go jumping into the shop for a couple of stages you should have plenty of funds. But having a couple less relics this late in the run won’t make things easy. 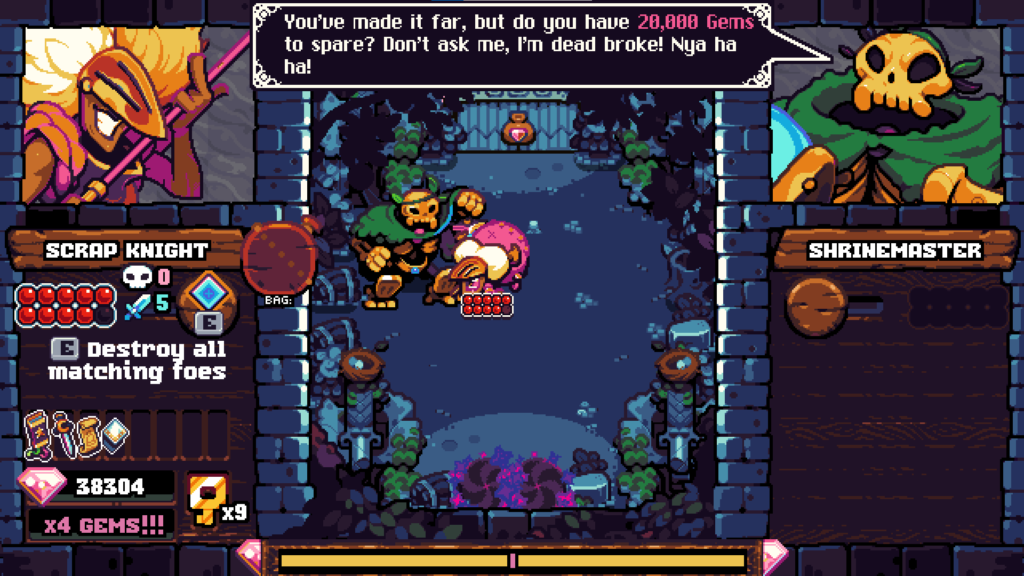 Where is the final piece of the key?

For the final piece of the key, you’ll need to jump in the portal in stage nine “Flying Machine”. If you’ve managed to survive this far, you’ll be faced with your greatest challenge yet. To open up the shrine this time, you’ll have to take on the massive skelly itself in a particularly challenging boss fight. Since you know it’s coming, it’s worth trying to grab the best possible power ups from the chests in stage nine before taking on the big guy. As with most of the bosses, it’s worth remembering not to rush the encounter. Wait for potions to drop in if you’re low on health. 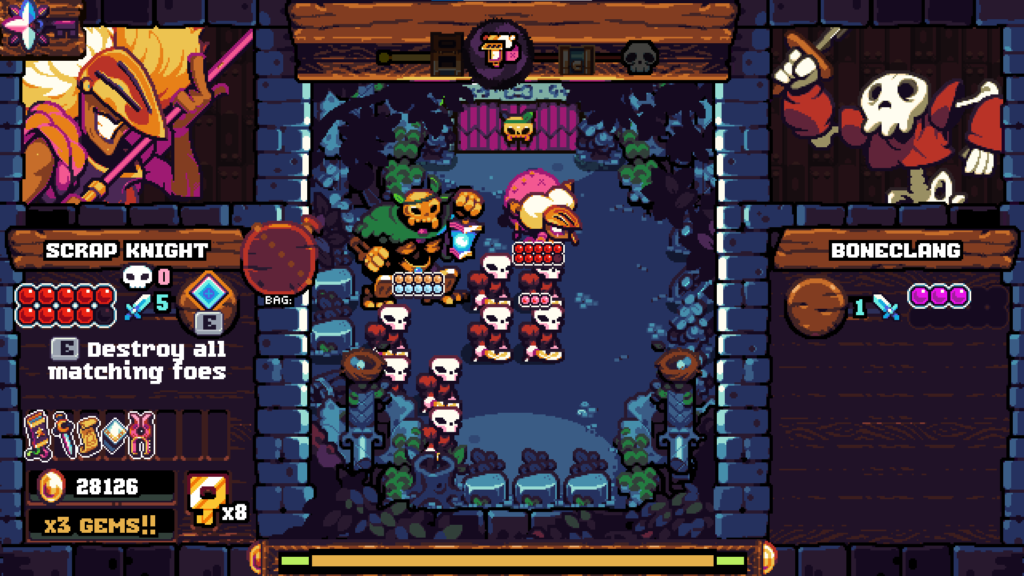 Now you’ve got the completed key, and once you beat the standard run boss you’ll be sent to one final stage. This area stage contains a selection of the toughest enemies you’ve encountered so far in one hellish arena. Lava slimes will coat the floor in the dangerous hot stuff, toxic rats explode on death. Add to that tentacles that can cut off half the screen and huge powerful Griffins and you’re in for a tough time. Always focus on the tentacles first, because you’ll need all the room you can get to avoid hazards. The relic that allows you to hover over the lava is an absolute game changer here, so prioritise that if you see it in a shop. It’s a beatable stage, but if you come in unprepared it will likely be the end of the run. 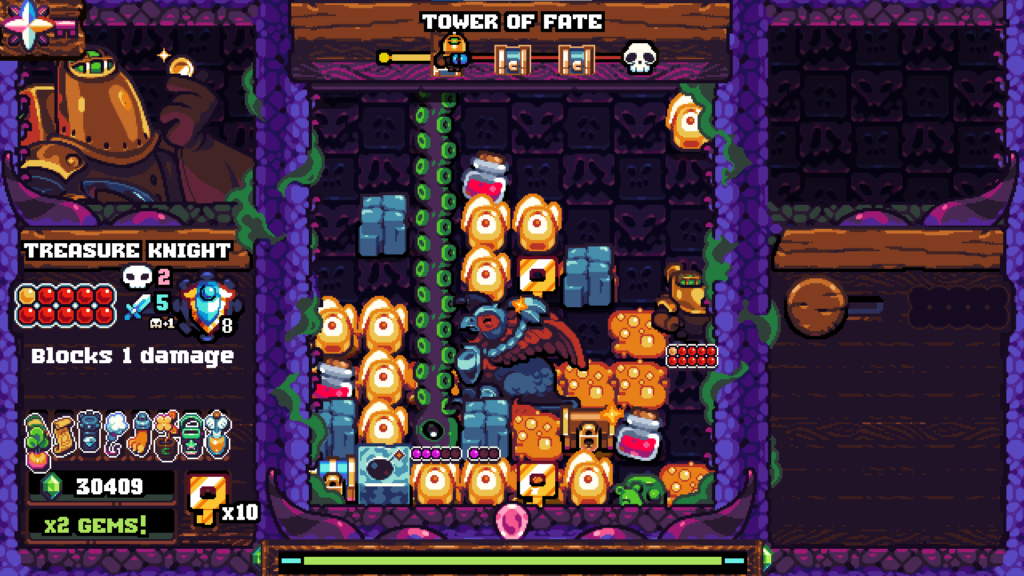 Two bosses await you if you make it through the stage. First is the evil Enchantress. She’s just as fierce as she was in the original Shovel Knight, sending huge orbs flying across the screen. Weave between the huge projectiles and try to give her a couple of smacks to start wearing her down. During the fight Skeletons drop from above, so the Relic that makes you deal extra damage to the Undead will make things easier. 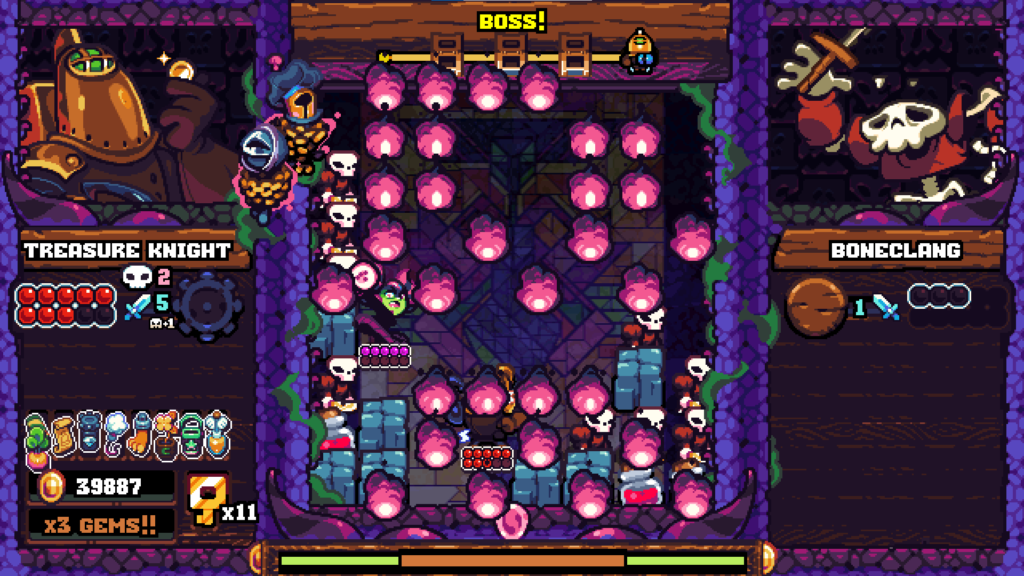 Finally the Enchantress turns Puzzle Knight into The Master Mind, for an epic final boss fight. This fight is more dodging Orbs and AoE blasts, so as long as you keep the area clean and stay on top of healing you should be able to survive. As well as skeletons, Crystal Creatures also drop from above in the battle, so keeping on top of the enemies will be much tougher. With a lot of skill and a bit of luck, you can beat back this monstrous golem and get ready to watch the final cutscene. 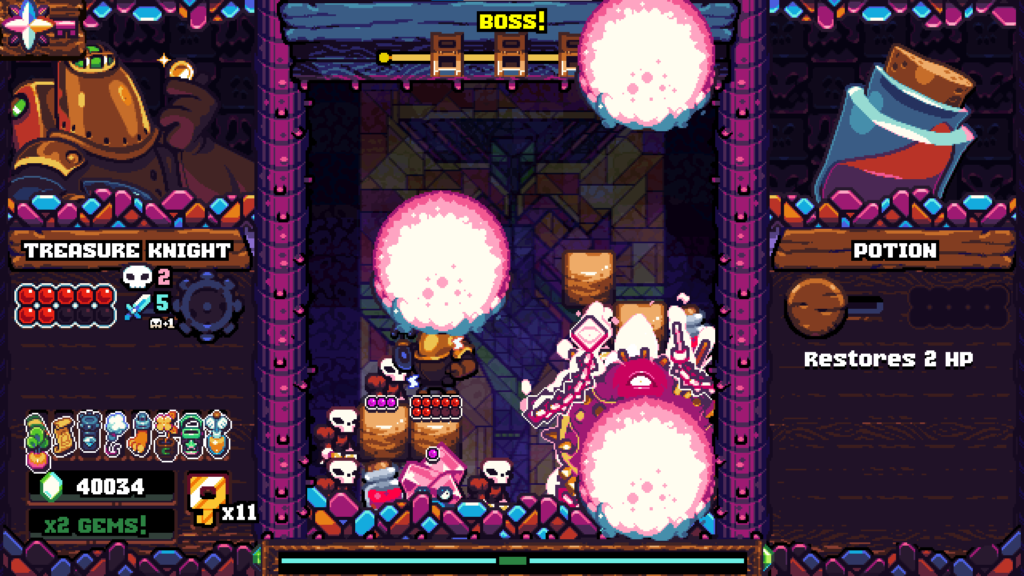