They say imitation is the sincerest form of flattery, but in video games we often dismiss titles that use ideas from others. Sometimes a new spin on an established mechanic can really lead to something special, but cries of rip off from angry idiots will inevitably come regardless. I say we enjoy games that build on the foundations laid by others, and let’s start with Cathedral.

You see Cathedral is a game that very much plays like Shovel Knight. You play as an amnesiac knight in a pixel art world and partake in some tricky retro platforming, with the main hook of being able to bounce on your sword. This means you’ll be hopping from enemy to enemy to get across many a chasm, and it’s just as fun as ever. One thing does set Cathedral apart from the indie darling that inspired it though, and that’s the fact it’s a Metroidvania.

The idea of a game resembling Shovel Knight with a sprawling world to explore is absolutely fantastic, and for the most part Cathedral manages to pull it off. Each area has plenty of paths to explore and hidden rooms to uncover, and there’s a variety of abilities and gear you unlock that will aid you in your quest. There are simple powers like a double jump and crossbow, but also some more unique ones. There’s a lens of truth that enables you to see which spikes are real and which are an illusion, a wand which lets you cast a moving bone platform, and my personal favourite Control Soul. You meet this little ethereal fella early in the game, and with this power can use him to push blocks and collect loot. He’s tiny so can fit in gaps you can’t, and is generally a handy ally to have. 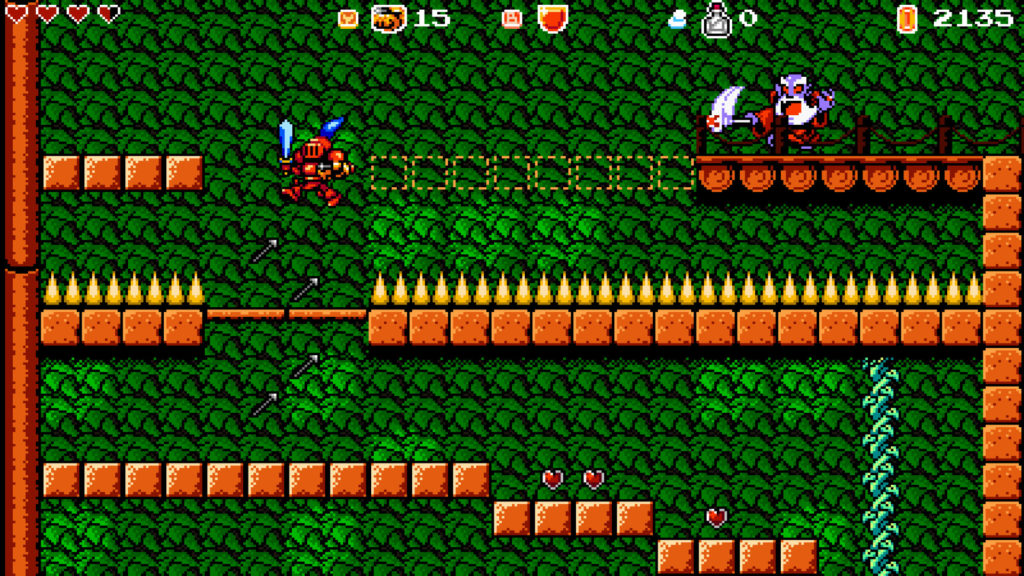 You’ll need all the help you can get to make it past the traps and puzzles lurking around every corner. Each new area has a bunch of new gimmicks you’ll need to get your head round, whether it’s lighting up torches in the correct order, moving quickly on blocks that vanish or bouncing on chainsaws on rails. The sheer variety is a lot of fun, and coupled with the pretty intense challenge ensures you’re never bored.

Cathedral is an unashamedly hard game. It never really takes more than a few hits to completely drain your health bar, and every time you die you lose 10% of your precious gold. You will die regularly and you will be frustrated, but when you make it through a particularly tricky section it makes it all the more worthwhile.

The only way you’ll survive in Cathedral is by upgrading your abilities as much as possible. Armour with more defence can be purchased from the store, a stronger sword might be the reward for following a side quest, and upgrading your potions is a must. There are more granular upgrades, too, that you’ll find hidden in the darkest corners of Cathedral. The most common of these gives your armour a 1% chance to avoid taking damage altogether, and stacks with each piece you find. This may sound like a tiny upgrade, but when that one hit is the difference between losing a chunk of your life savings you’ll praise it. 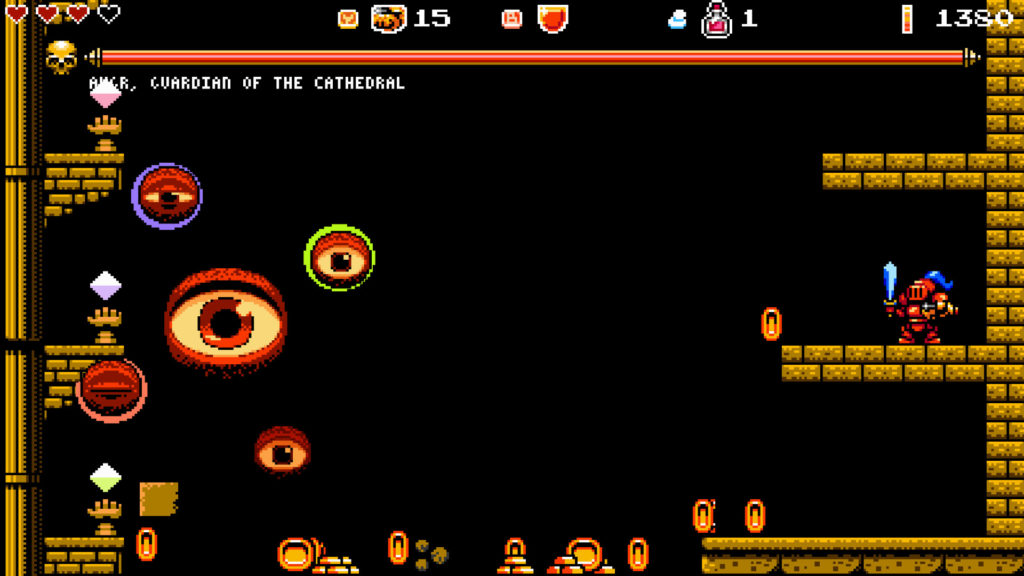 Money management is a huge part of the Cathedral gameplay loop, so you’d better look after the pennies. The first way to ensure you don’t lose too much cash on death is by putting your money in the bank. Cash is obviously safe when left there, but you can only store a limited amount of gold before you need to pay to upgrade your account. There’s also the option of using a warp gate to get back to town regularly to spend it as fast as possible, as well as a purchasable trinket that reduces the loss a percent at a time.

You’ll get access to more money and upgrades by completing side quests. There’s plenty to do off the beaten track in Cathedral, and unlike many Metroidvania-likes there’s a quest log to ensure you don’t forget what you’re doing. There wasn’t a single side quest I completed that didn’t provide me with something great, be it a hidden weapon upgrade in a dark cave or piles of gold for returning lost books.

As well as the quest log Cathedral also has a handy feature to ensure you know how to progress, the fortune teller. At any time you can visit their house in the city and interact with them to get told exactly what you’re supposed to be doing. There are no vague hints, you just get told where to go and why. It’s a helpful way to get yourself up to speed in between sessions, which I was happy to take advantage of on more than one occasion. 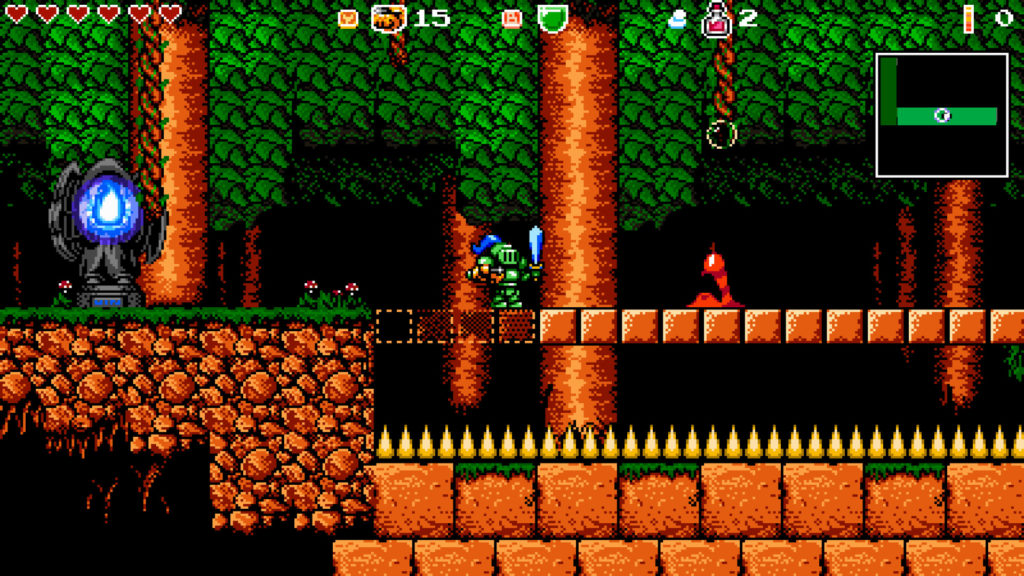 Of all the things I loved about Cathedral, the boss fights were what I enjoyed the most. Every one of these huge fights took me multiple attempts, learning the bosses tells, and as many health potions as I could quaff. If fighting the same foe over and over again while watching the health bar get ever closer to empty is your idea of a good time, you won’t be disappointed.

Cathedral is a fantastic game, but it isn’t without its issues. Sometimes checkpoints are miles apart and sometimes they are right next to each other. It’s really inconsistent and pretty frustrating. An even bigger issue is the music. The chiptune soundtrack is often incredibly grating, with no real sense of musical timing. There were times I actually thought it was broken because it just sounded like randomly generated bleeps and bloops. I can’t recall another time the music in a game has been so bad that I’ve had to turn it off for my own sanity before, and it’s a real shame.

Cathedral is a delightful Metroidvania, with hard as nails platforming, huge boss fights and plenty of ideas packed into its retro world. Upgrading your hero with new gear and abilities is really satisfying and backtracking to find new secrets in hard to reach places is as compelling as ever. If you’re feeling brave enough to cope with its difficulty (and have the mute button handy) Cathedral will reward you with a truly wonderful adventure.

Checkpoints are often too far apart
The soundtrack is painful

Cathedral is a hell of a challenge, but if you’re up for taking it on you’ll find a lot to love in this old school Metroidvania.