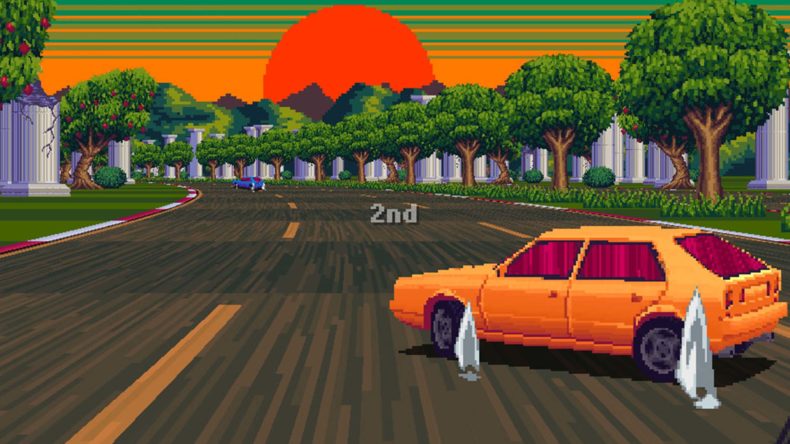 It’s not difficult to see how Sandro “ansdor” De Paula’s solo-developed Slipstream very quickly met and exceeded its crowdfunding target back in 2016. Firstly, it was conceived in Brazil – a place where retro racers of this ilk are met with the same kind of reverence and fervour as their crazy bootleg Sega Master System scene. And secondly, who doesn’t feel a pang of wonderful, warm nostalgia when they think about the 80s, of Magical Sound Shower, and the simple joys of Outrun?

The influence of SEGA, in particular their aforementioned classic and its modern sequels, and the underrated arcade drift-out fun fest Initial D, form the DNA of Slipstream. It offers a Grand Tour mode that echoes the branching paths you first took your Ferrari down in 1986, as well as a series of cups, individual race options, and a killer endurance mode where slowpokes lagging at the back are eliminated from the race. 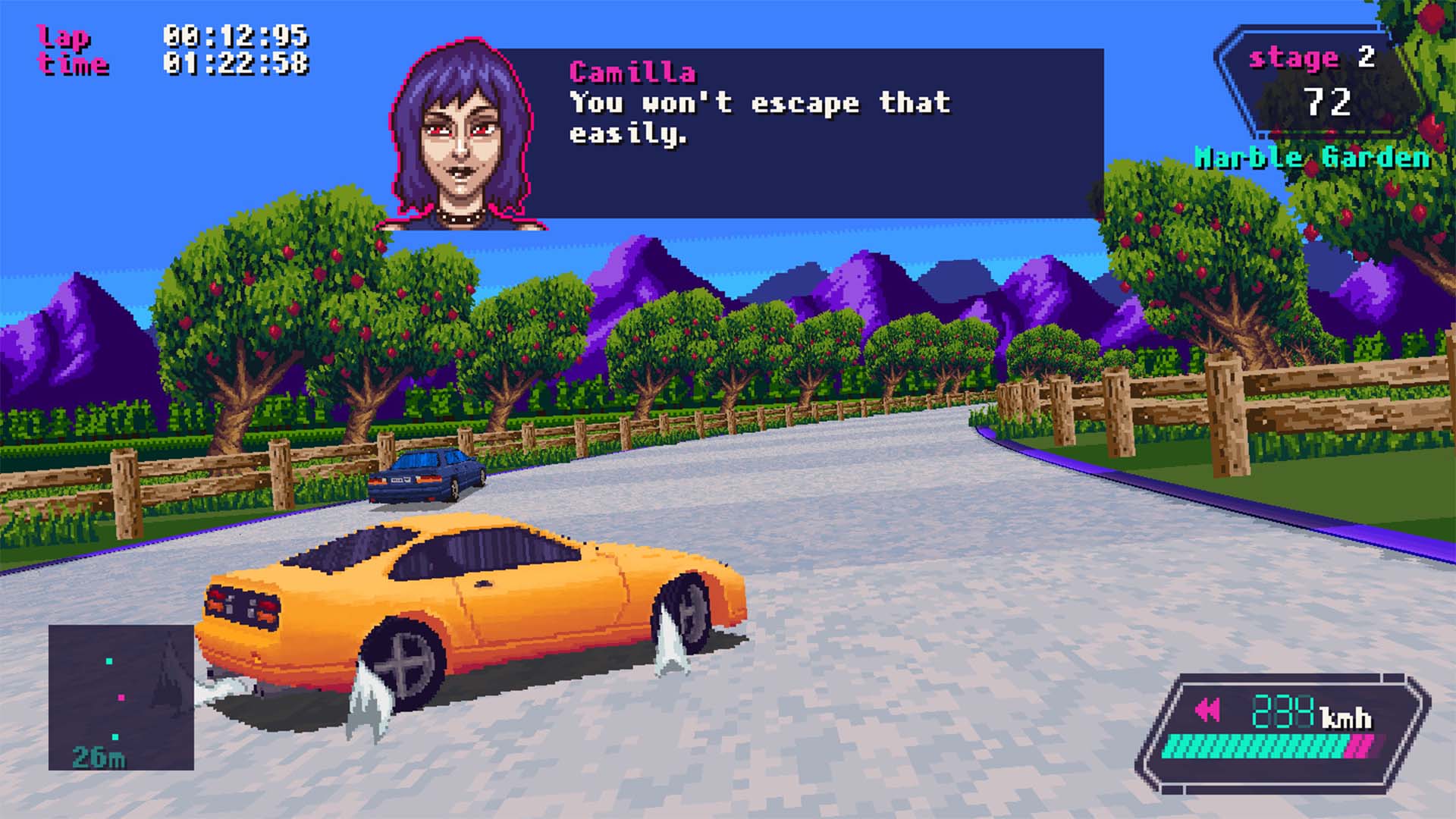 Visually, Slipstream is a winning combination of vaporwave aesthetics, recognisable approximations of well-known classic motors, and a range of superb screen filters that mimic display modes such as the scan lined glory of CRT monitors, or pixelate the whole damn thing. Keeping with the retro feel is the fabulous soundtrack from Effoharkay, which is the perfect accompaniment to the action. So impressed was I that I found myself exploring more of his retrowave oeuvre. The overall presentation sets the mood, makes you want to get stuck in, and whets the appetite for some serious arcade action.

Your first thought is “Christ, this is tough”. The tracks are simplistic, but brutally unforgiving at times – be prepared for sudden corners to take you by surprise, knackering your chances of taking the win. The roads are busy with traffic, including the regular appearance of a niggling rival that you encounter during races, who you will become borderline obsessed with beating. But like any good arcade racer, you are given some mechanics that can be learned and used to your advantage.

As well as the time-honoured drifting, the titular slipstream allows you to drive closely in the wake of your four wheeled foes and gain a gloriously parasitic burst of speed to surge ahead. It is similar to the way you can slingshot past your opponents in the superb Sonic All-Stars Racers, and is key to your success in Slipstream. Incidentally, ansdor is clearly a huge fan of the Blue Blur. I won’t spoilt it for you, but check out some of the stage names and you will find yourself smiling. 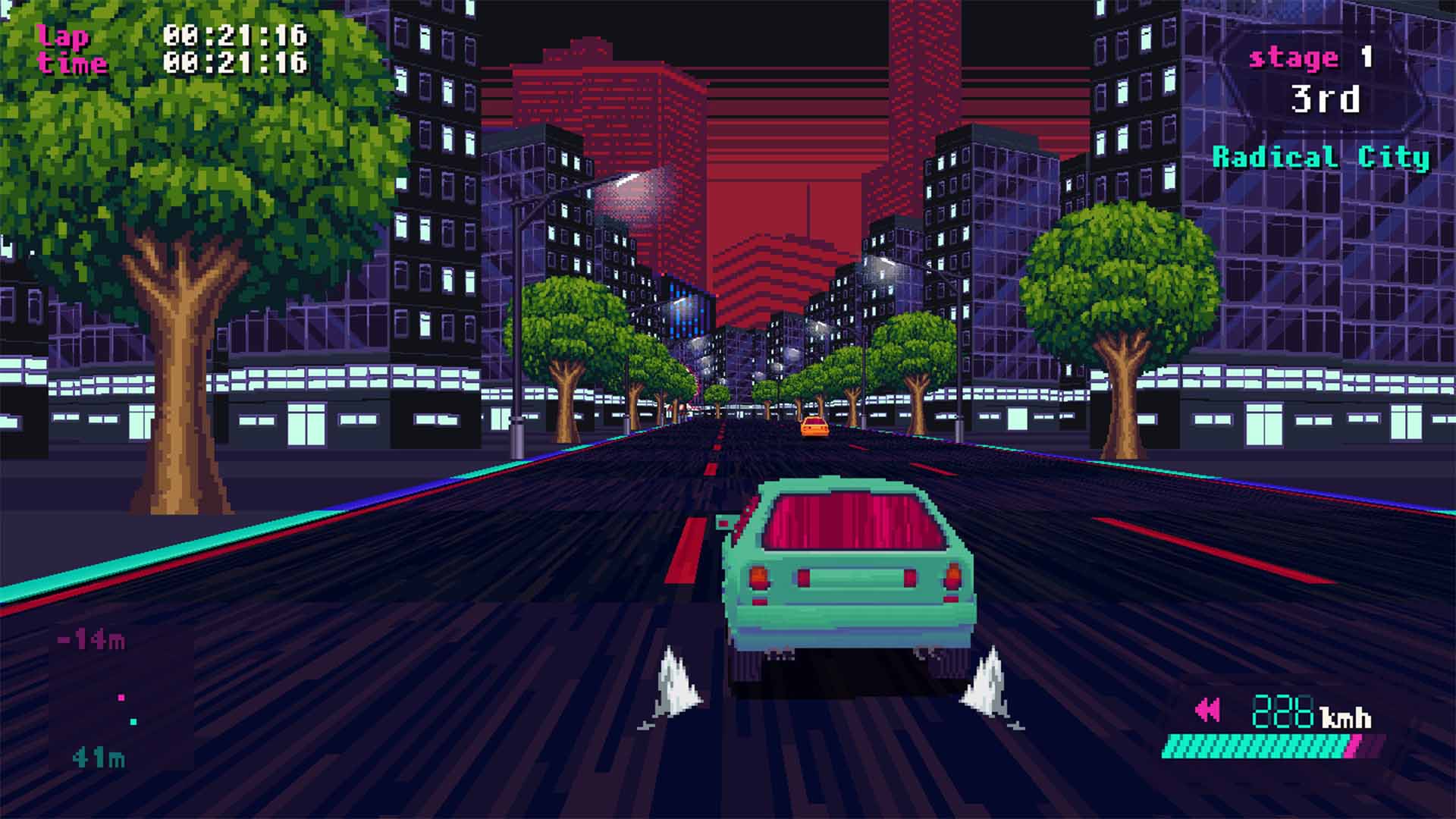 Purists will baulk at the ability to turn on automatic drifting, and likely honk their horns in rage at the rewind function, which enables you to literally roll back time by a few seconds and correct yourself in a crash or corner balls-up situation. I found it an extremely useful tool to familiarise myself with some of the trickier to negotiate bends and corners.

This is a terrific game, which even before I played I knew I was going to love. It tickles all of my retro receptors and then some, plays like an old school dream, right down to the four-player split screen option which took me back to Lotus Esprit Turbo Challenge as a tear escaped down my cheek. It is the ultimate evolution of the super scaler tech of my youth. Best of all, it is a ridiculously cheap price. Get it purchased.

Very tough
May be too simplistic for some

Slipstream is a terrific game, and cheap to boot. It is the ultimate evolution of the super scaler tech of my youth.