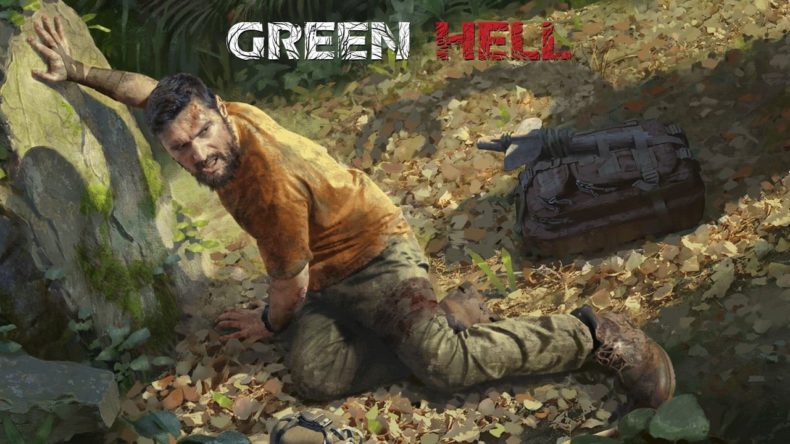 Most games in the Survival Sim genre can be separated into one of two boxes. The box in the left includes your standard “wake up naked and punch rocks” games, like Ark: Survival Evolved or Seven Days to Die. And then you have the box on the right, containing games that go that extra step or two right off the bat. We’re talking Subnautica, The Long Dark, and – crucially – Green Hell.

The games in the right hand box present the same challenges, ultimately, but with more of a focus on narrative. They generally have a greater sense of direction and something to drive you forward beyond simply trying to saddle a T-Rex before any of the buck-naked murderers you’ve woken up next to. Not that saddling a T-Rex isn’t something to aspire to, of course.

Green Hell even goes a step further than most, though. In it, you take control of Jake, an anthropologist who has travelled to a remote part of the Amazon with his wife Mia. Their mission isn’t entirely clear at first, but its seems they have been here before – or at least Jake has. The primary goal seems to be for Mia to make contact with a primitive tribe, while Jake catalogues new species of flora and fauna – which is a little odd for an anthropologist. 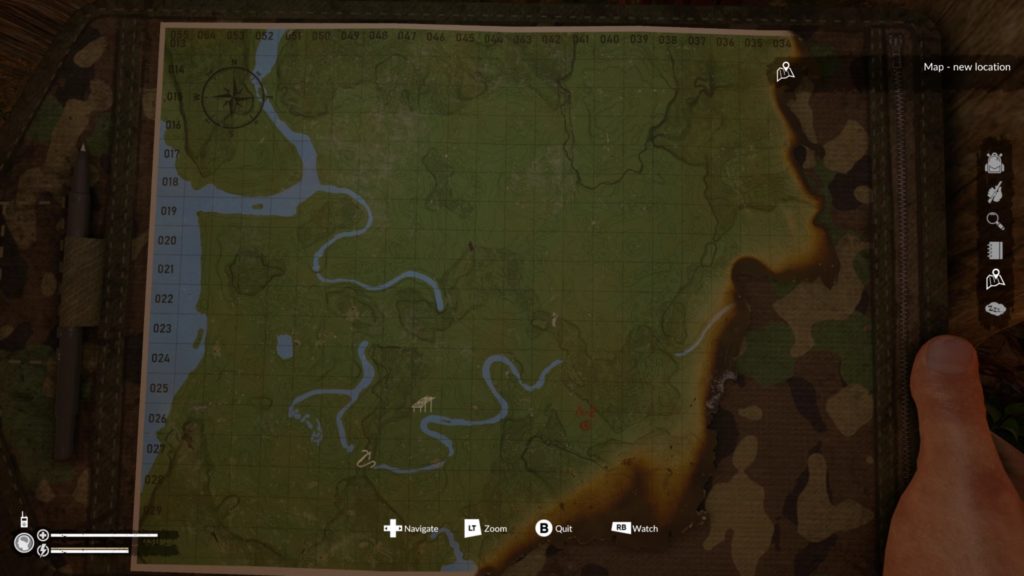 There’s a brief tutorial that eases you into things like your mum easing you into the new jumper she got you for Christmas. You learn to harvest wood and stone, and have a quick go at starting a campfire. You’re given a machete, some easily accessible kindling in the form of a dry bird’s nest, and an abundance of firewood. It’s nice. Simple. Relaxing, even. Then the game yanks the jumper over eyes and punches you in the stomach until you cry.

Jake and Mia are quickly separated, with Mia possibly imprisoned or at least threatened by the Yabahuaca and Jake fully up the proverbial creek. Lost and alone in the jungle, you’re now tasked with surviving and finding your missing wife. At this point, Green Hell takes everything from you. No machete, no handy little firelighter, no canned goods or protein bars. Just you, your notebook, your radio, and the watch Mia gave you for your birthday.

The watch is essential though. It contains a compass, for a start, as well as readouts to track your vitals. And, of course, a clock – so you know how close you are to nightfall. Night time in the jungle is mildly petrifying, especially for the first couple of evenings before you can make yourself a fire. Green Hell is tough in these opening hours. And it’s not even like it throws dangers at you, really. You just kind of wander into trouble on your own. 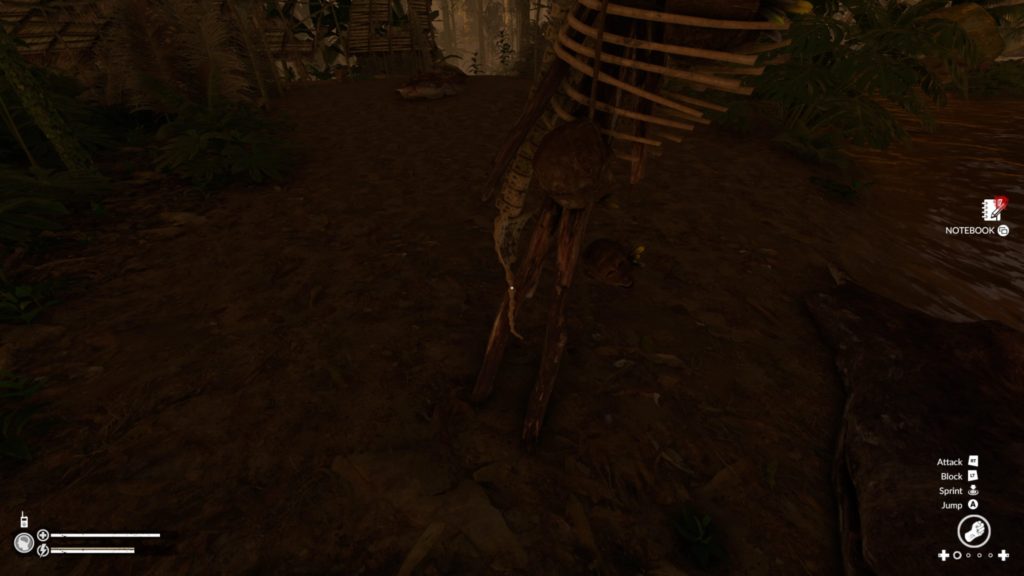 Your notebook contains all the information you need, from details on plants and animals you find to blueprints for building tools and amenities. In Green Hell you won’t see glowing icons or contextual prompts everywhere. If you break a tree, the branches will be highlighted, but until then it’s up to you to work out what will or won’t yield materials. And Green Hell is very stingy with those materials. You need certain leaves to make bandages; wood, plus kindling, plus a catalyst to build a campfire. Insects and fungus may or may not be edible, and often the only way to find out which is to get it down you.

Because you’re always reminded that you need to find Mia, the sense of urgency stays with you. You don’t piss about constructing a three-story border fort like in some survival games. Instead, you’re focused on staying alive and scavenging only what you need. Sure, you can eventually craft a knife and a spear, and before long you’ll knock up a fire like flicking on a light switch, but before this point and even after it, you’ll die. A lot.

From rattle snakes to tree frogs to that poisonous snail you just had to lick, to wild animals, native traps and misjudging jumps – the jungle has hundreds of ways to kill you. You will need to examine your body for scratches and cuts, because if left alone they will become infected. You need to eat and stay warm. And if you’re lucky enough to get yourself a brain parasite, well… Look forward to Jake fully losing his mind until you get rid of it. What begins as swimming vision quickly escalates to full-on sensory hallucinations that are genuinely creepy. Voices whisper in your ear, demonic shapes loom in the shadows. It’s trippy, sure, but also lethal. 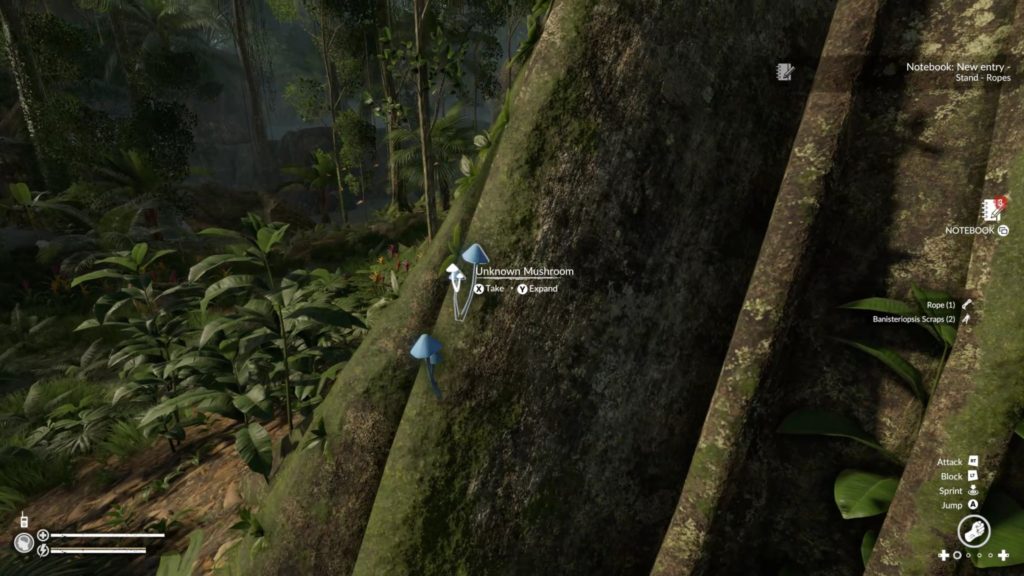 If you’d rather focus on survival, you can choose that mode from the menu. You can also tailor the difficulty to suit you. There’s even the option to play in co-op, or select “peaceful” mode and just gather and build free from danger. Actually, this is a good way to at least get your head around the intricacies of survival.

For those who have finished the main story (though not exclusively), the Spirits of the Amazonian expansion is now available. Originally released in three parts, this prequel story shines more light on what happened to Jake last time he was in the jungle. It offers something akin to sidequests as you work with and for the Yabahuaca, helping them to gather specific materials and even rescuing lost children. There’s more interaction here between Jake and the tribe, which adds more depth to the world. Although why the hell Jake chose to come back to the jungle is anyone’s guess, as you’re just as likely to die horribly in this mode as in the campaign.

The difficulty does eventually balance out. Once you’ve got the basics down and know which items to harvest, which animals to avoid, and how to take care of some of the more deadly issues Jake will face, it becomes more manageable. It’s never truly easy, even in the default mode, but once you move past the opening four or five hours you will begin to find the rhythm. 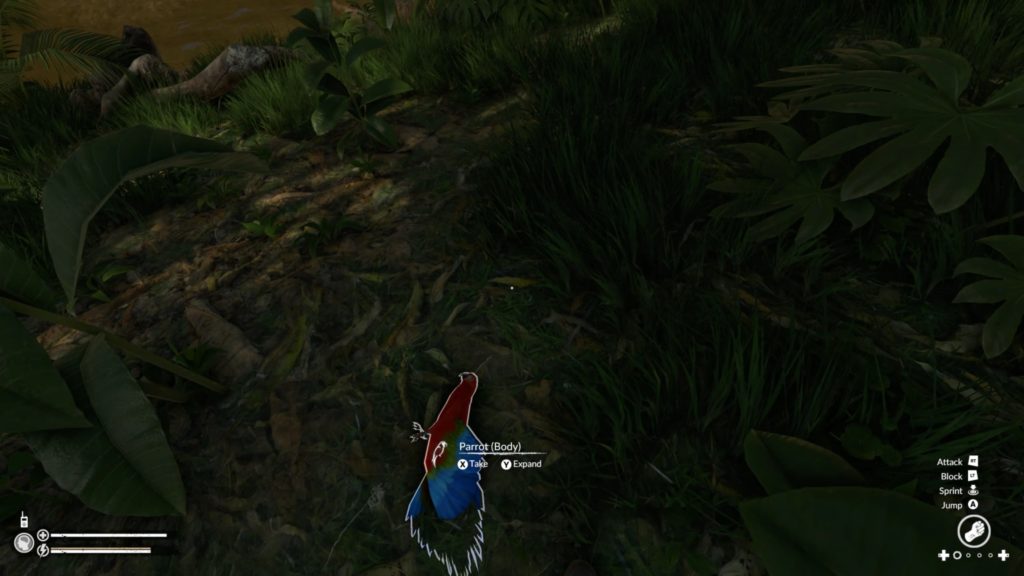 Jake’s campaign story adds gravitas to the trial and error gameplay, while the jungle itself is as beautiful as it is deadly. Deep green undergrowth gives way to weather-beaten caves; sun-dappled pathways lead to glittering rivers. The moon at night, pale and ghostly, is enough to give you chills on its own. The world begs to be explored. Everything you do will fill in another entry in your journal, and teach you something else about the world you’re in.

Green Hell is the best survival game I’ve played since The Long Dark. It respects your time, doesn’t treat you like an idiot, and expects you to learn from your mistakes. It wants you to stroke that colourful frog, snarf down a handful of grubs, rub that pretty flower into your wound. You’ll probably die, sure, but then Green Hell wants you to die, too. Because in the forbidding depths of the jungle, that’s just how you learn.

Green Hell is the best survival game I’ve played since The Long Dark. It respects your time, doesn’t treat you like an idiot, and expects you to learn from your mistakes.