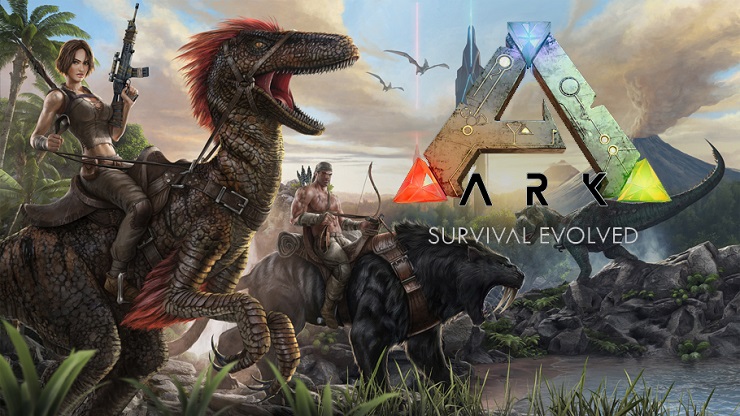 Ark: Survival Evolved has been in the ether for over 2 years, seeing multiple updates along the way, and now the game is finished (to an extent), it’s time to review it. Truth be told, it is both a fantastic open world survival game, and a depressingly painful one. If you have plenty of free time, you’ll get the most out of it, but if you can’t dedicate a large portion of your life to Ark, you will find yourself to be a very little fish in a very big pond. It can be brutal beyond words, and on the PvP servers you will be punished by other players relentlessly. Dinosaurs of all kinds will tear you limb from limb, and death will become a certainly. Only when it clicks, and you begin to forge a life for yourself on the Ark, does everything become so much clearer. Time is valuable, and it’s up to you to find a way.

The main objective is as simple as they come: survive. How you chose to live is up to you. You’re free to live alone, hunt alone, and kill alone. As fun as this can be, you’ll get much more out of Ark if you team up with other friends, building communities, choosing to be a tribe full of brutal killers or peaceful settlers. It takes quite some time to get to this point, as your first hours will be spent not having a clue what you’re doing, and the lack of a decent tutorial really effects your enjoyment. You wake up on an island with nothing other than the skin on your bones and the pants on your crotch. After choosing some simple character mods (like skin colour, body width), and selecting exactly where on the map you land, you’re ready to go. I would advise you start off in the easier section of the map, such as the West Points, as there’s plenty of water, flat land, rocks, and trees to help you stock up on materials, and fewer meat-eating dinosaurs are roaming around (that doesn’t mean there aren’t any, though). The basic systems in Ark revolve around collecting materials to craft. Pick up stones, pluck fiber from the ground, and punch trees for wood to get the components for a hatchet or a pick. Then you can use these to break down bigger rocks and bigger trees for more materials. Build fires, cook food, drink water, and build basic shelter to get through the first few days, then focus on the next stage of your survival: living comfortably. You can make yourself clothes, a house, irrigation pipes and stronger weapons and traps to protect you, troughs and saddles for the dinosaurs you can tame (yep, you can tame and ride dinosaurs!), and so much more. Obviously this takes a hell of a lot of time, so you’re going to have to be incredibly patient if you want to live a comfortable life. When you level up, you gain Engram Points, and that is how these items unlock for you to craft, but you still have to actually find the materials to craft.

But this is a brutal world. There’ll come a point where you’ll either give up or break through the pain of constant death and disappointment. In your first few hours, you’ll more than likely to be beaten to death for no particular reason by gangs of strangers just because they can, or because they think you might have something they want. It could also be down to the fact that when you die you lose everything and people are very protective of their wares, so they’re prepared to kill to protect it. Either way, there are some violent, unrelenting arseholes ready to butcher your fresh face. I got far too pissed off trying to forge a life for myself only to keep getting killed by the same two guys. I’m fairly sure they went looking for people like me just so they could kill me like it was some sport. It can be a griefer’s paradise. That’s why I spent plenty of time in the PvE world which you’re free to play the same kind of game without the online hatred. I remember the first few hours in PvE, and it was full of stories I can retell over and over again. The one great thing about Ark is that you’ll always come away with a tale or two, whether it involves you on your own, or you and your friends trying to invade someone else’s stronghold, or trying to take down and capture a T-Rex. Anyway, I remember trying to get to grips with the Engram systems and a Parasaur came stomping all over my campfire. I was hungry and had a Dodo cooking on the fire, but the dino stomped all over it. I crafted a couple of spears and went after it, managing to launch one through his neck. As it went through his thorax, it got spooked and ran into the lake, heading further and further out barely keeping it’s head above water.

I watched the Parasaur struggling to stay afloat and it left me wondering whether I should have just left it alone and tried cooking another smaller dinosaur or bird. Suddenly, as I was just about to swim out to try and get it, a huge shark swam at it and seemed to drag him underwater, killing and then eating it. I was starving, desperate, and unsure how I was going to survive. There are no guidelines in Ark, so learning anything takes a lot of time. Thankfully, as the game has been out for some time there is a huge community on the internet to help you out, but it’s much more fun finding out for yourself, even if there’s plenty of danger out there. The amount of updates and expansions to Ark has meant there’s an overwhelming amount of things to do. There’s no doubt you’re making a great investment, and the amount of things you can do is staggering. Whilst there is a story of sorts in the game, you’ll make much more of an interesting narrative through the things you do yourself. I know I’ve said it a lot already, but you really must dedicate a lot of time to building a life in Ark: Survival Evolved. One careless mistake will cause you to lose all of the items you’ve worked so hard to do, and logging out in an unsafe place can leave you without anything as people can steal it whilst you’re off the Ark doing real life things like your weekly shop at Tescos or watching this week’s episode of Match of the Day.

It’s certainly a game you should consider, and many of you familiar with sinking time into games like Minecraft and World of Warcraft will have no problem living on the Ark. It’s a decent looking game, but there are plenty of times when weird things happen, like watching a Pterodactyl carrying a Brontosaurus in its mouth whilst a baby Dilophosaurus starts floating into thin air, but you just kind of get used to it, much like the bugs of Fallout and Skyrim. It’s rather pretty though, and from the jungles to the deserts (of The Scorched Earth expansion) there’s plenty of ground to cover, and plenty of beautiful things to see. It’s just a shame the servers can be so brutal, and this was a big issue for me. Whilst the single player is good, spending too much time alone ends up getting a bit boring. Still, as ambitious as it is, the team has build a game that will steal good hours away from you. Just stay away from the Raptors, OK. Those dudes are dangerous.

It's incredibly ambitious, but without spending hours upon hours building a safe haven to protect you from the brutality of PvP, the single player feels a bit redundant without anyone to play with.