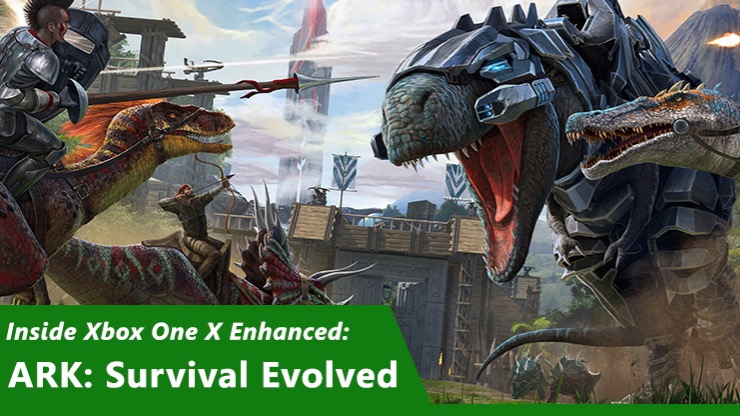 ARK: Survival Evolved launched on Xbox One a while ago and we have details for the Xbox One X enhancements.

ARK is available on both PS4 and Xbox One platforms. It has been recently Xbox One X enhanced and includes the following improvements as posted by the dev team on the Xbox Wire:

On Xbox One X, ARK has a new “Detail Graphics” option which raises the resolution to 1440p and enables the highest-end graphics effects we’ve got, including long-distance shadows, high-rez textures, volumetric clouds, and dynamic weather systems & atmospheric effects. We also have an HDR mode that players can enable on compatible displays which makes the game’s rich lighting look absolutely stunning. In the gameplay department, the Xbox One X’s extensive memory removes the “distance limit” tether that forced players to stay near each other in local splitscreen, improves load times, and Xbox One X-hosted servers support 70 players, up from 50.

ARK: Survival Evolved is available on PlayStation 4, Xbox One, and PC. Read our review of the Xbox One X here.