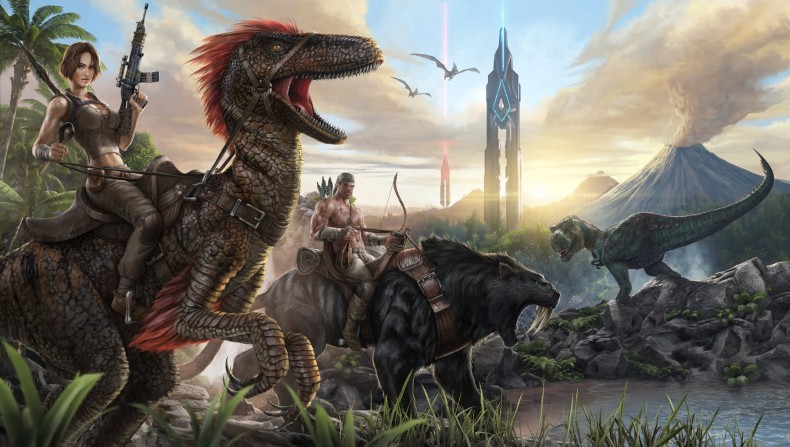 I really don’t know how I feel about ARK. The game has been in Early Access on PC and Xbox One for some time, and finally it’s available on PlayStation 4. I’d been looking forward to play this for some time; there’s been a lot of negative feedback about the ferocious multiplayer community and the aggressive nature of many of its dinosaurs, but I still wanted to try it out for myself.

It’s such a mixed bag of elation and annoyance, hatred and happiness. I’m a massive fan of dinosaurs, and to be able to play a game that has me interacting with many different species in a lot of different ways is very exciting–however, it’s a very punishing experience. Whether you’re getting ripped to pieces by mega piranhas, dragged across the skies by pterodactyls, or being beaten to death by a gang of other real players, the learning curve is a steep one. You start off as a practically naked human, spawning in a random location within one of the many ARK servers. From there, you must survive, which sounds simple enough, but ends up being a gruelling, near-impossible challenge. Being a helpless, weaponless individual, you are prone to the terrors of such a wild and unforgiving world. It’s a heart-pounding experience, with almost everything you encounter somehow becoming a threat.

There hasn’t been one other player that hasn’t seen me and wanted to pummel me with their club–the community is brutal, and it’s one I’m not sure I like. There’s a server chat you can be a part of, but everyone seems to be an absolute dick. Of course, this isn’t the devs fault at all: it must be the primitive nature of the game that brings it out in the meekest and the mild.

Not only are you trying to avoid angry cavemen, there are some pretty mean dinosaurs in ARK. I’ve been savaged by a dilophosaurus, ripped apart by velociraptors, and twatted to death by the tail of a brontosaurus; all in all, it has been a tall mountain to climb. Upon death, you respawn, but I’ve lost count of the amount of times I’ve woke to the claws of an angry dinosaur ready to kill me again. Survive you must, though, and by collecting materials is one of the only way you’re going to do so. Punching a tree gives you thatch and wood, searching plants gives you fiber, and there’s plenty of stone to be found on beaches and deep in the jungle. By levelling up your character you’ll gain engrams, and these can be used to unlock abilities to build and craft items, such as housing and weapons. Spending time in the inventory gives you some information as to how it all works, but it isn’t very helpful; a tutorial wouldn’t have been a bad idea, especially as there is so much to take in. It wouldn’t be so bad if you didn’t die a ridiculous amount, as stopping a second to check what’s in your inventory can mean that a raptor has the chance to attack an unsuspecting pleb checking how much thatch they have to build a roof.

Along with the need to craft, you also have to eat, keep at a steady temperature, and also make sure to don’t break any bones. If you don’t keep an eye on your health, you may find yourself dying of natural causes too. It’s a survival game in the greatest, grandest sense, and if you thrive on monitoring every little detail, you’ll most certainly thrive in ARK. It gives you plenty to do, and does it rather well. ARK isn’t a finished game yet, and there are many bugs that affect the smoothness of the visuals and the overall gameplay, but it’s still a decent-looking game. The island is massive, and the amount of dinosaurs I’ve seen so far is staggering. I’ve seen parasaurs, triceratops, ankylosaurs, and stegosaurus as well as all of the others I’ve mentioned. I’ve still yet to see a tyrannosaurus rex, but they do exist in ARK, and I’ve heard stories about mosasaurs and spinosaurus as well. I’ve yet to tame a dinosaur, but I intend to persevere and make a name for myself in such an unforgiving world.

It’s been an eye-opener, but I’m sticking with it. It’s hard as nails, pushing Darwin’s survival of the fittest to the limit, but there are some fantastic ideas and mechanics behind it all. It’s made harder by the real players wanting to batter ten barrels of shit out of you at a moment’s notice, but regardless, ARK could be something great. Just remember, if you struggle to find anything to eat, you can pick up your crap and eat it–a little tip from me to you.

ARK: Survival Evolved is published by Studio Wildcard and is available on PlayStation 4, Xbox One and PC.

Video games are cool. Don't let anybody tell you any different.
MORE LIKE THIS
ARK: Survival EvolvedPreview