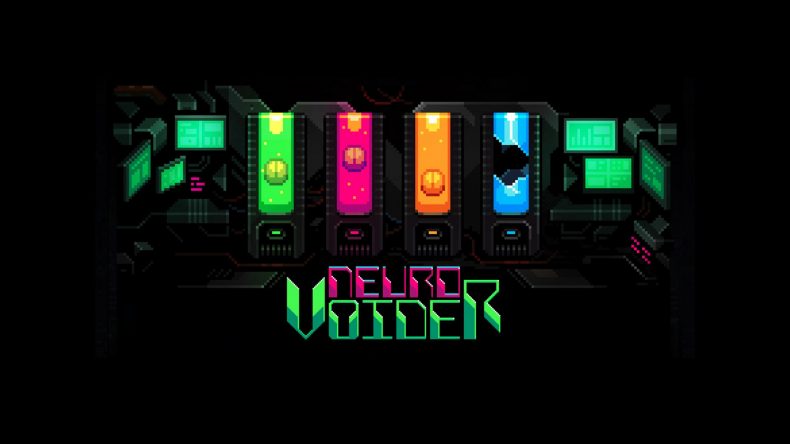 It’s over, the robots have won, and the human race is extinct. As masses of human corpses rot the tin heads are having a huge party to celebrate their conquering of us meat-sacks. If you’re reading this right now, don’t panic, you’re still alive. None of this has really happened, it’s the set-up for rogue-like, twin stick, bullet-hell shooter NeuroVoider.

What’s left of us homosapiens is four brains in jars, kept around because… well, because brains in jars have some sort of cool, future vibe? Maybe? Anyway, your brain breaks out (as brains do) and the slightly shady FAT.32 robot decides to help you out so that you can carry out his plan your revenge. Pick one of three robot classes (Dash, Rampage, Fortress) and go and obliterate robot ass over twenty missions to destroy reactors, evenly divided by hectic boss fights. In a basic run down you move with the left stick, aim with the right one, and fire using either the left trigger or right trigger button. Your robot also comes with two special abilities, one that’s exclusive to the class you’ve chosen, and one selected from a set before you set off: the dash class has a dashes (duh); rampage has a, well, rampage; while fortress generates a shield, very much a Ronseal deal here. Your second ability can be taken from a lengthy list and can consist of a self heal, an EMP to knock out all enemies briefly and many more, picking the right loadout to suit your play style is paramount to a lengthy run through NeuroVoider’s missions.

All firing and abilities consume Energy Points (EP), which causes you to overheat and leaves you unable to do anything bar moving if it runs out. This leaves you defenceless until your EP charges back to full again. You’re not stuck with your starting loadout though, enemies drop loot and scrap which can be used to change your components granting more health, better EP recharge, faster movement and different weapon types. All the items have got delightfully silly names as well, like Disk Machine of Anihilation or Tri-phaser of Lubrication and after each mission you’ll find yourself scouring through your new toys to see if you can enhance yourself in any way. If you find yourself without anything better then you can use your scrap to forge new items, but do so at your own risk as you may need it to heal up if a mission went particularly badly. You’re always given a choice as to what mission to take on, each node offering three options for you to consider (aside from bosses, they’re mandatory). There are three main things to consider when taking them on, Size, Elites, and Loot. Size obviously denotes level size, bigger levels meaning more enemies and more generators to take out. Elites are big robot units, much harder than the small fry you’ll see most of the time, but these guys have a much better chance to drop good items for you to customise yourself with, while a higher Loot mission stat means you’ll have a higher chance of getting drops, but not necessarily good ones. So careful consideration of your abilities and what you potentially need are required. Are you confident enough to be greedy? Or will you play it safe?

There’s a lot to like about NeuroVoider, it’s not exactly fast paced, but pretty much any encounter can be hectic, and the boss fights can be stressful. The customisation of your loadout is compelling, with regular junking of unneeded items and analysing numbers to ensure the best return on your death dealing. The thing is, it’s good, but that’s about it. There’s nothing that exceptional, it’s just a good game, a good game with some really distracting screen shake (seriously it happens constantly, but can be turned off). That said, it’s another great fit for the Switch thanks to always having two joy-cons handy for impromptu co-op (which is great) on the go, it’s just lacking that little something special.

With an excellent USP for co-op the Switch is fast becoming the true Indie darling, and the real successor to Sony’s ill-fated Vita, and it’s really not hard to see why.

Bringing NeuroVoider to the Switch was a real no-brainer for Flying Oak, it’s a good slice of rogue-like action for this terrific machine.