previous
Lemnis Gate is a refreshing take on the FPS genre | Hands-on preview
random
next
Ori: The Collection announced for Nintendo Switch
0 comments 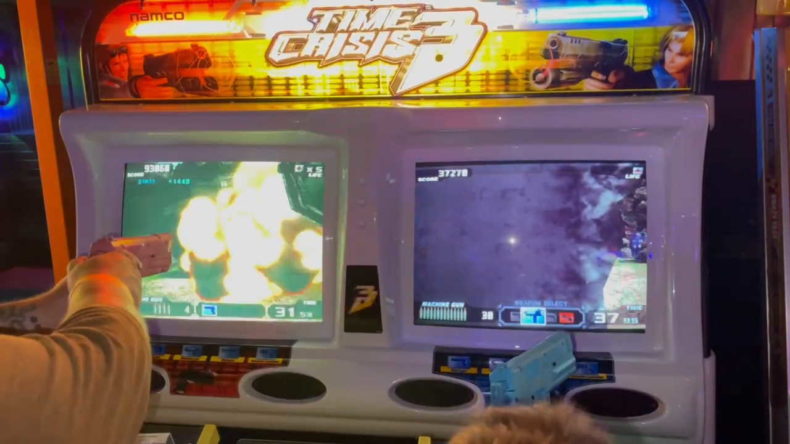 Despite having an on-or-offline world of current gen entertainment at my fingertips, as well as a Raspberry Pi that enables me to access a treasure trove of retro goodness, I am still very much a sucker for the old-school physical act of playing an honest to goodness arcade game in its physical form. There is something magical about the whole experience – from the bezels and art designs of the cabinets, to the CRT screens, and the often-punishing difficulty. And of course the social aspect that was part of my formative gaming years as a child.

Back in the day, arcade cabs were everywhere. Takeaways, newsagents, working men’s clubs, cross channel ferries, bowling alleys, fairgrounds. And of course seaside resorts and holiday destinations. These were all places you could find them in abundance. Nowadays, even dedicated amusement arcades are barren in terms of actual traditional coin-ops. Instead preferring prize-incentivised fare, with occasional sub-par driving and light gun games. Enthusiasts of a certain age can now buy, collect and customise machines in their own homes for personal enjoyment. But mainstream arcades are only really a thing in Japan, or select pockets of big cities.

Re-live your youth in a new arcade

Thankfully, some entrepreneurs have cottoned on to the fact people like me still love to experience and re-live their youth. Dedicated independent businesses housing classic arcade machines are popping up all over the place. The latest to open its doors in my locale is the Insanity Retro Gaming in Poole. Along with an excited eight-year-old, my editor and I, two men old enough to know better, sampled its wares recently. Is it worth your time and money? 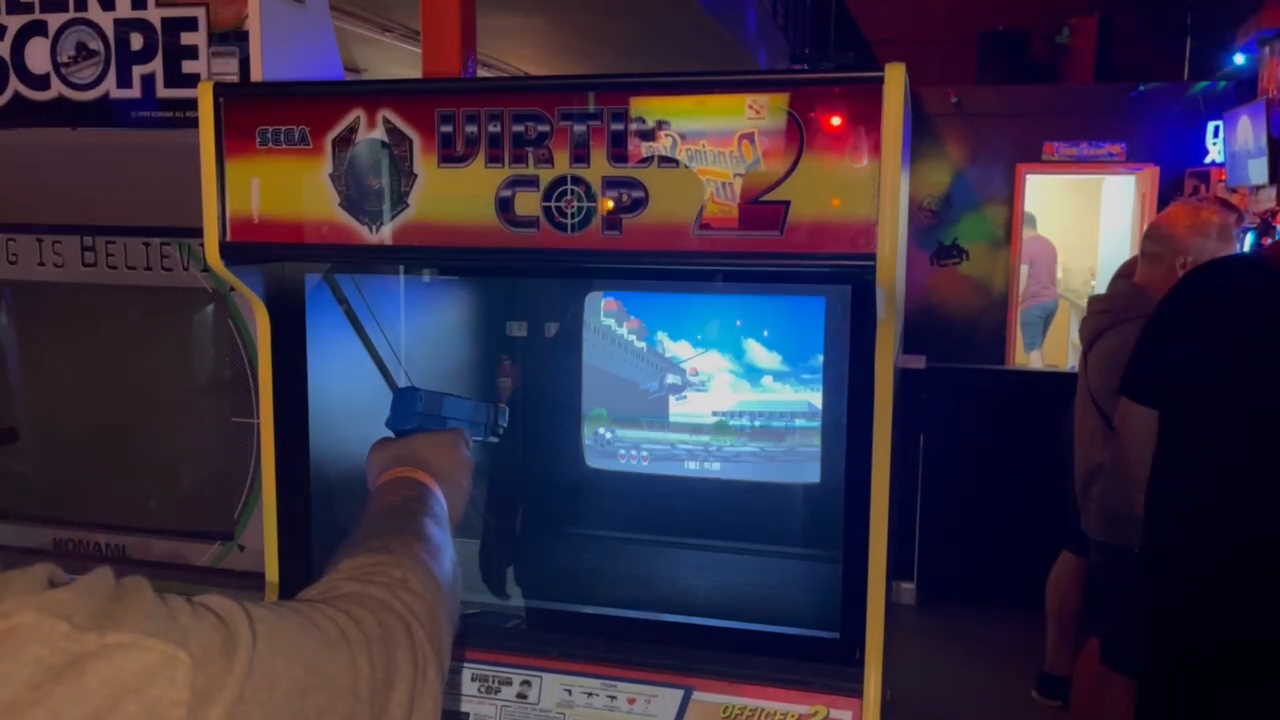 It’s located on an industrial estate in the lovely seaside town of Poole. Insanity combines a pay-per-session amusement arcade with licenced food and drink, and their own retro gaming shop. You pay a set fee for a three-hour session, and are given a wristband and carte blanche to play all of the titles inside. Obviously this means they’re all set to free play. In an excellently laid out two-story industrial unit, there are a selection of titles spanning the gaming ages. Prime, dedicated driving cabs are present and correct with well-maintained Sega Rally 2, Super Hang-On, Crazy Taxi, a fun HD Nascar experience.  But best of all: Taito’s rollicking Chase HQ sequel, Special Criminal Investigation.

An impressive Star Wars Battle Pod was hugely popular particularly with the younger visitors. This one offfered an immersive enclosed experience. It reminded me so much of playing the vector-based Star Wars in a similarly sized cabinet way back in the Eighties. Light gun fans are catered for with Time Crisis 3, Aliens Extermination, House of The Dead 2, and a very nice vintage duo in Operation Wolf 3 and Lethal Enforcers II: The Gunfighters. Sadly, a huge, non-operational Silent Scope took up a large piece of real estate. This would be a recurring theme, as Sega’s incredible Virtua Cop was playable, but the calibration was off rendering it a frustrating experience. 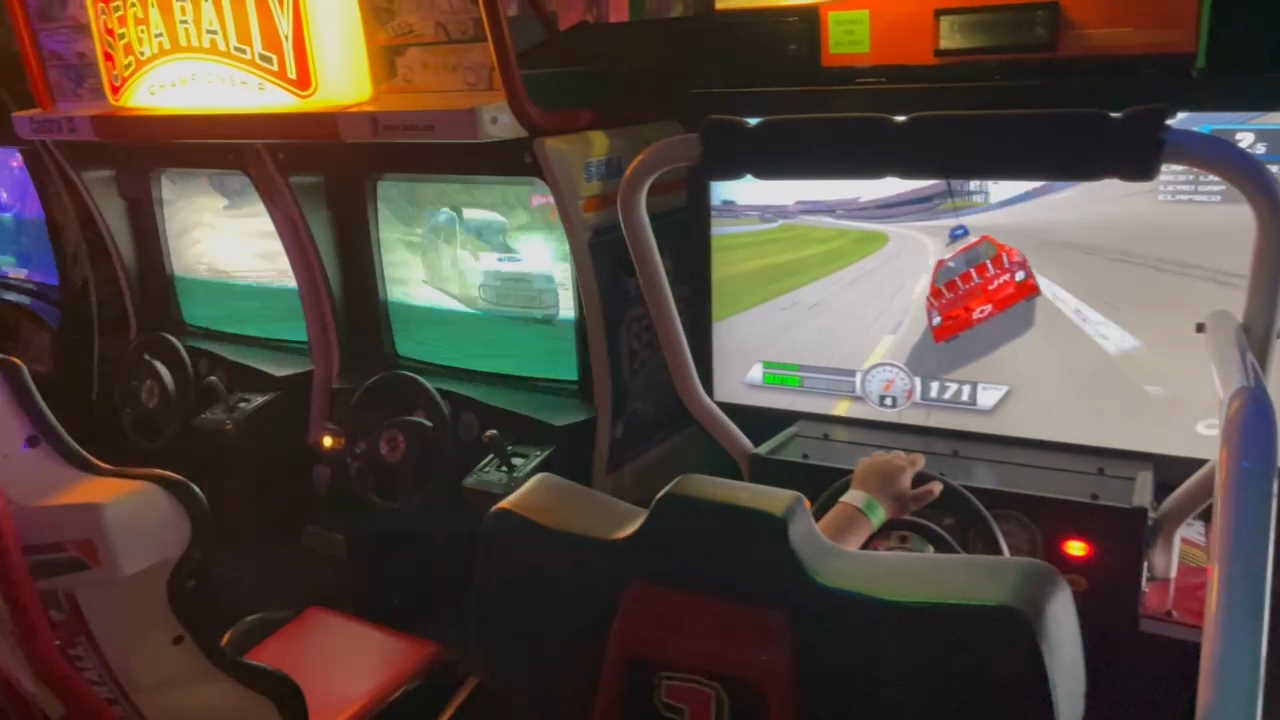 There are some beautiful dedicated machines to play. The slept-on 1991 Spider-Man brawler, a duo of Nintendo stalwarts in Mario Bros and Popeye, Capcom’s groundbreaking Side Arms, Double Dragon II, a lovely Time Pilot and of course the ubiquitous Space Invaders are all fine examples. It was a genuine pleasure playing the simplistic, nails-tough Wonder Boy in its intended format for the first time since I holidayed in France about 28 years ago.

Modern with your retro

I got most excited at the prospect of playing the most left-field PCB in the whole joint. Featured just as you walk in, R-Type Leo had me salivating as it was the first time I had ever seen it in an actual arcade cabinet. Disappointingly, the joystick was faulty, meaning that it was unplayable. So-bad-its-good Sega legend Altered Beast was also one I was looking forward to romping through, too/ But there was an issue with the start button that meant you can only start with two players. Upstairs, a dedicated Street Fighter II had a sub-par joystick rendering it a frustrating experience.

There are playable home consoles on offer, with the likes of Super Smash Bros and Tekken joining an old Xbox 360 demo pod. There are also a few of the modern Arcade1Up cabs dotted around. But my overwhelming feeling is that there are too many niggles with the machines, and some glaring omissions. I expected at the very least a handful of competition-standard fighting games. I was crying out for a KOF, a Darkstalkers, or a more modern Street Fighter. There are no candy cabs, and a distinct lack of decent Sanwa sticks or buttons, or similar. There’s no hori shmups, no Capcom belt scrollers, and glaringly, not a Neo Geo MVS in sight. We overheard one patron berating the lack of an Outrun 2. This is another cast-in-stone classic that no arcade should be without. Hell, even the original OutRun would have done!

The entry price is quite expensive for what is actually on offer. Particularly if you are a genuine arcade nerd like I am. Kids will relish being able to repeatedly enjoy the larger more spectacular offerings without pestering parents for change, though. As a parent, I am all-too aware of how much cash a kid can burn through with pound-a-pop cabs. I walked away feeling a little bit disappointed. With a few extra inclusions this place could be a must-visit. On the plus side of things, their well-stocked retro shop, whilst a little disorganised (alphabetize or DIE!!) has some gems and is fun to explore. 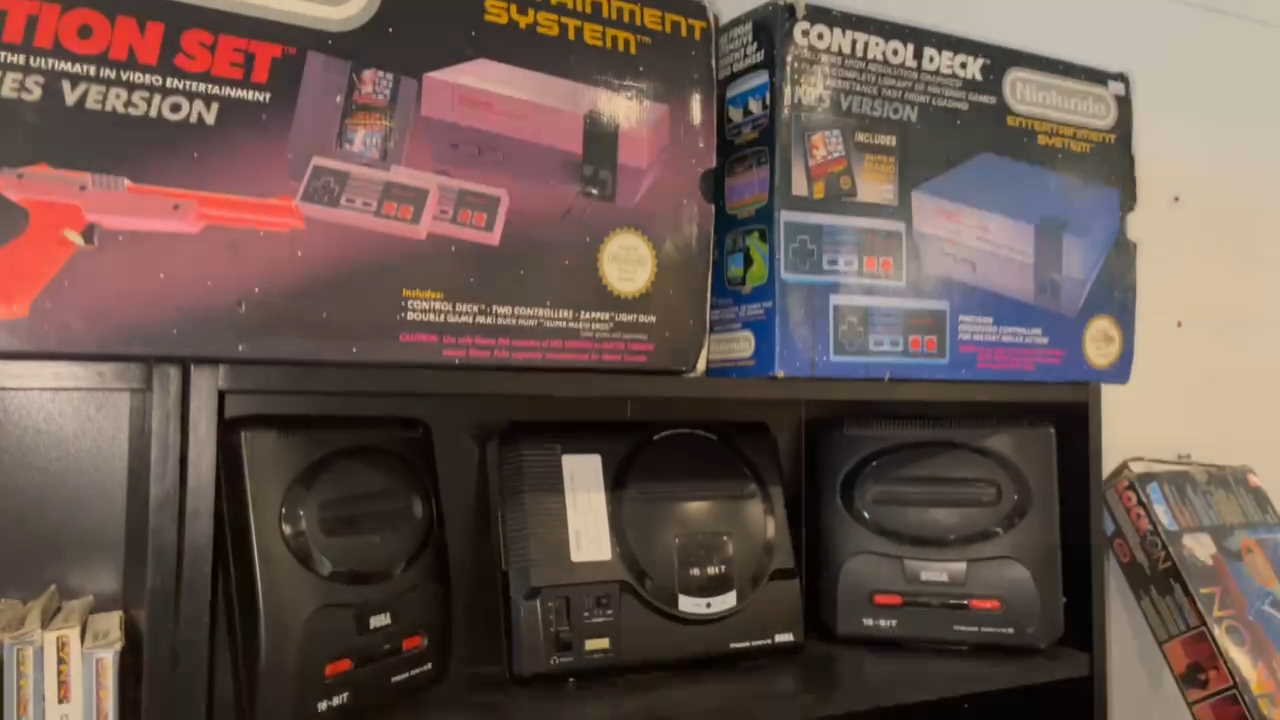 The staff were all lovely, and the food was absolutely excellent, and good value – a kids burger meal dwarfed the same offering from certain golden arched establishments, and was destroyed with fervor by my lad. Being licensed, it also serves alcohol, with bottled beers, wines and spirits all keenly priced. Everywhere was spotlessly clean, with hand sanitizer everywhere, and staff regularly cleaning the sticks and buttons. The facilities were also maintained to a high standard. The venue can be hired out for parties, and there are regular events and promotions. It is undoubtedly a cool place to hang out, and with a bit more attention to the quality and selection of games is somewhere I would love to come back to, preferably with a designated driver, so I could have a few brews whilst bashing some buttons.

The king. If you know, you know.
MORE LIKE THIS
arcadeRetroRetro Gaming