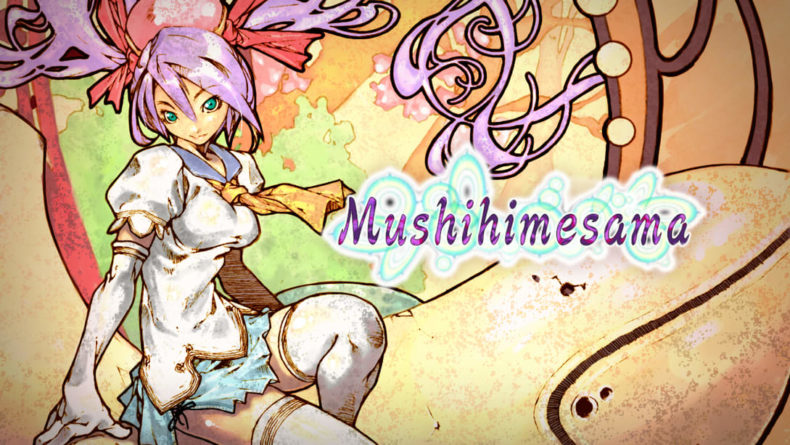 I was first introduced to the bullet hell sub-genre by a friend at university. After watching me play some R-Type he gleefully asked if I’d ever played a “Danmaku” shooter. He then promptly whipped out his laptop and showed me a Touhou game. I was amazed to watch him effortlessly dodge tens of thousands of bullets. Instead of going to the Union that night, I attempted to survive as a magical girl in a world of neon pain.

It didn’t take me long to learn about Cave in my journey through bullet hell. The Japanese developers are responsible for a huge amount of the genre’s best games, often originating from the arcades. One such game is Mushihimesama, which debuted in arcades in 2004. It was then ported to PS2, Xbox 360 and even iOS. The bullet-dodging classic is now available on Switch, and is as nightmarish as ever. 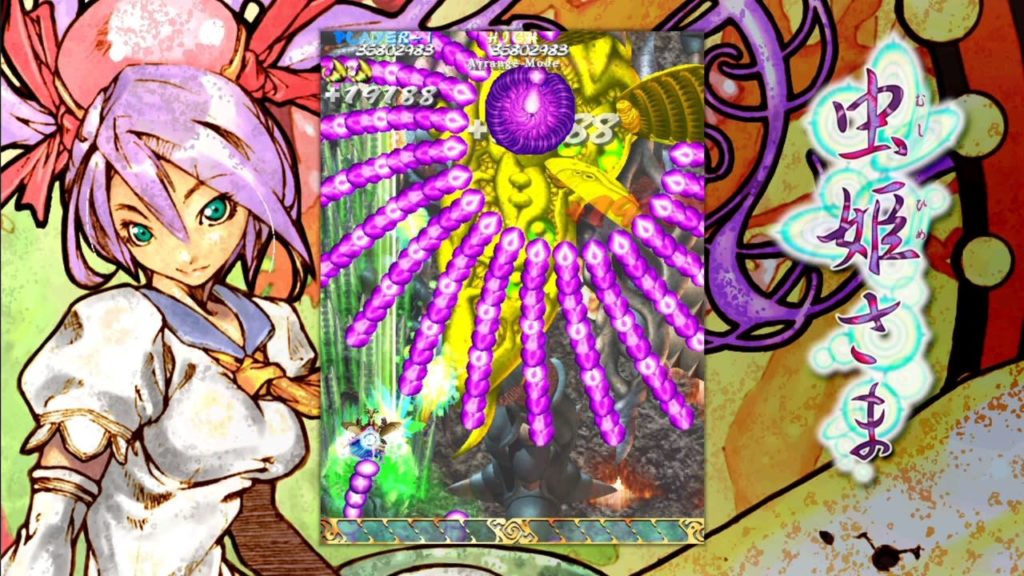 The world of Mushihimesama is full of huge bullet-spewing bugs known as Koujuu, who have driven humanity to near extinction. Naturally it’s your job to jump on the back of a golden beetle and destroy hundreds of the insect menace. The story is almost nonexistent, but at least brings with it a great setting and fantastic enemies.

Like most Shmups, Mushihimesama is easy to learn and hard to master. After choosing one of three weapons before the game starts, you’ll be faced with hundreds of enemies and even more bullets. Most smaller foes go down in seconds, and you’ll want to dispatch these pests quickly if you don’t want the screen to fill with bullets. There are also larger enemies and bosses who shoot out huge walls of bullets. It’s up to you to find the gaps in the attack patterns so you can survive without a scratch.

There’s nothing quite like sneaking through a screen full of bullets unscathed, but it’ll take some serious practice to make it happen. There are a few systems that will help you survive until you’re a dodging master though. Bombs don’t do much in the way of damage, but destroy all bullets on the screen and are great in a pinch. Then there’s the deliberate slowdown. This isn’t connected to the technical performance, and features in most Cave shooters when the bullets really start raining down. It feels weird at first when it happens unexpectedly, but you’ll learn to love your helpful bullet time. There are also no limits on dying other than score penalties. You’ll get to see the credits no matter how much you get blasted. 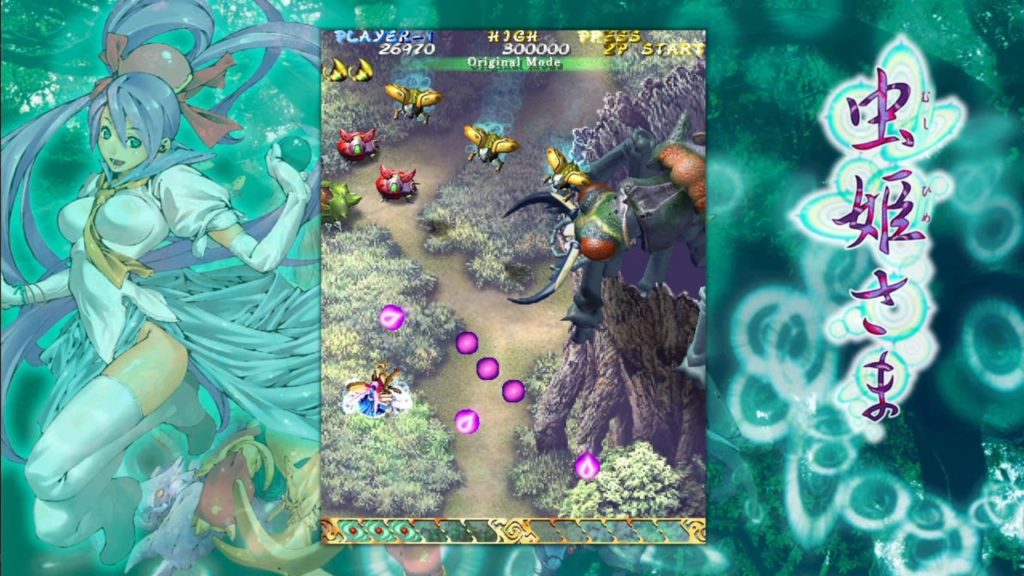 Making yourself more powerful means less bugs and less bullets, so you’ll want to arm yourself accordingly. Each starting weapon is upgradable with powerups, and they all have their own advantages. The spread gun means you probably won’t have to worry about aiming, but the more focused laser deals way more damage when you aim it right. Alongside your base gun you’ll also find extra “options” that fly alongside you firing lasers at pesky moths and grubs.

This release of Mushihimesama comes with a lot of different versions of the game, each with their own quirks. If you want to go for the arcade classic you can, but there’s also a novice mode, a remixed arrange mode and 1.5 mode to delve into. Unless you really know what you’re looking for it’s not particularly easy to tell these modes apart. They have options for starting fully powered up, automatically using a bomb when hit and plenty of different bullet patterns to take on. 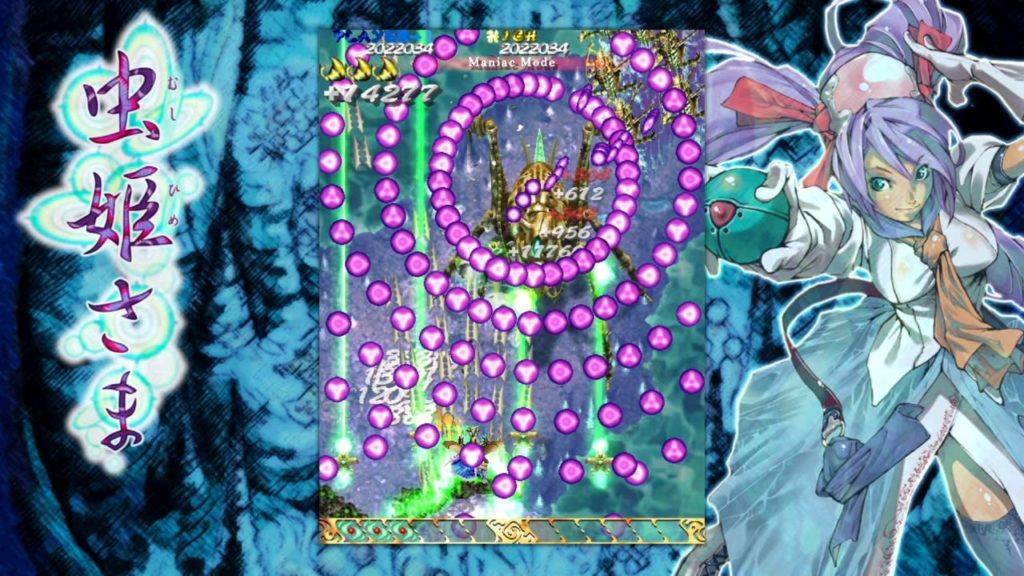 Another feature I really liked was the screen setup. By default the action will take place on a vertical strip in the middle third of the Switch’s screen. You can also unplug the Joycons and flip your Switch to portrait mode for a more authentic arcade experience. These modes all work in TV mode too, so hardcore Shmup fans can rotate their entire TV if they want the bullets to be as big as possible.

Mushihimesama is a great bullet hell Shoot ’em up, with plenty of options for newcomers and genre veterans to enjoy. The hellish difficulty won’t be for everyone, but very little is more satisfying than perfectly navigating through thousands of neon bullets perfectly.

Navigating the bullet hell of Mushihimesama is incredibly satisfying, but not everyone will be prepared for the sheer difficulty of this classic Shmup.