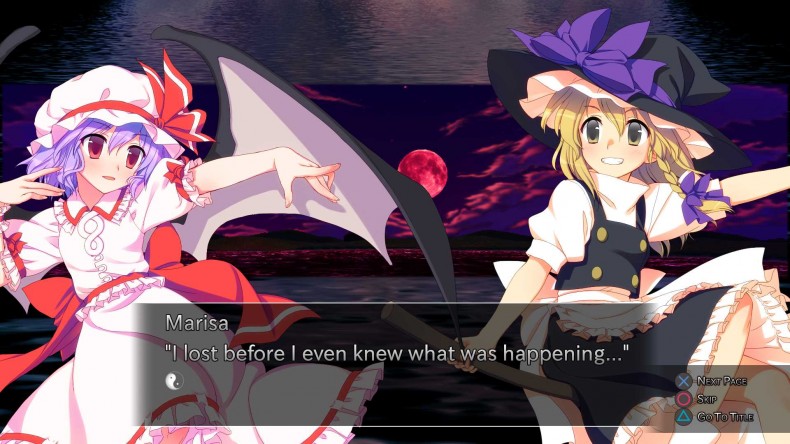 Touhou Genso Rondo: Bullet Ballet is the first Touhou that’s been localised for the West. The Touhou project was started by ZUN who is the sole member of Team Shanghai Alice creating bullet hell games. Bullet Ballet is a 1v1 fighting game that combines aspects of bullet hell shooters and fighting games together quite well. While there is a lot of depth to combat and the bullet hell aspect is great, a poor story and annoying controls don’t make for a great first impression.

Story modes in brawlers are usually hit or miss. Touhou Genso Rondo’s story mode is a poor excuse for the characters to just fight with each other, told through short visual novel style dialogue segments. While the character portraits look nice, they don’t really help improve the pointless story. While the mode is really short for each girl, there’s no option to save in the middle of a run so only begin it if you aim to power through it to the end with a particular character. Arcade mode is more fun because difficulty is ramped up as you progress. Boss Rush mode on the other hand isn’t really a boss rush, but more of a mode that has the opponent start out launching a spell. Speaking of pointless things, the tutorial tries to throw a lot of information at you but doesn’t actually let you play along with it. Instead, you just see poorly drawn portraits explaining things with combinations of buttons shown on the controller for a few minutes. I wasn’t expecting a Guilty Gear Xrd Revelator (which is the best in game tutorial ever) but come on. This, coupled with the annoying controls, soured my experience initially.

Thankfully once the Danmaku (or bullet hell) begins, the neon lights and gazillion shapes on the screen remind me why I like this genre in the first place. While the main gameplay occurs on a letterbox in the middle of the screen, CUBETYPE has used the left and right to display character information so there’s less clutter when bullets of all shapes, sizes, and colours are flying across the middle.

Combat involves dodging opponent bullet streams and waves with tank controls and using spells. Spells range from normal ones that basically convert the gameplay into a vertical shoot em up where you have as much time as your charge bar lasts to bombard your opponent with attacks. Each girl has her own spell. There’s a good amount of button mashing involved as you create streams and waves of neon bullets of various shapes to propel onto your opponent. While I didn’t manage to find any online opponent for this review, I played locally against someone and it was a lot of fun. Each girl plays differently and has different kinds of bullets and attacks. Visuals are nice and the gameplay is smooth outside of the dramatic slowdown during a round ending. Portraits for the girls are also crisp, although some of their expressions are a little bland. There’s nothing better to complement waves and streams of bullets than a catchy soundtrack and there’s one to be found here. Some voice acting would have been nice but there is none in Bullet Ballet.

Touhou Genso Rondo: Bullet Ballet is a good but not great first step to bringing the Touhou games to the West. Fans of bullet hell games will enjoy themselves here, but for newcomers to the genre, there are better experiences elsewhere.

Bullet Ballet has a lot of depth to it and even is fun in short bursts but is let down by a dull story mode and annoying controls.