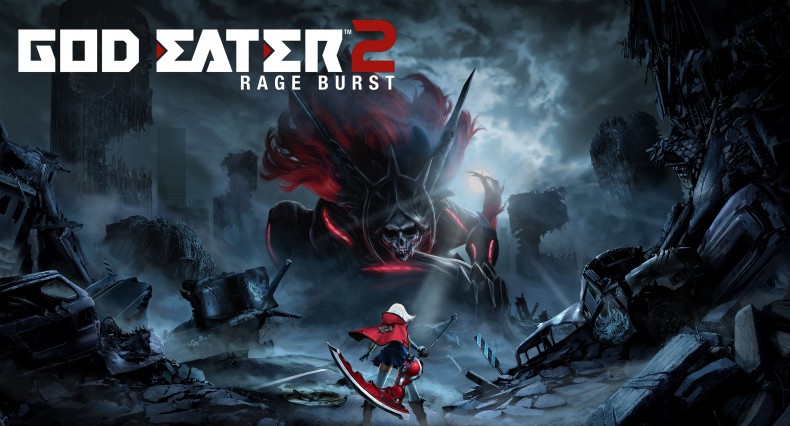 The God Eater franchise dipped its toes into the Western market with Gods Eater Burst for the PSP more than 5 years ago. Since then the franchise went on to see a second mainline entry on PSP and Vita, and then on to remakes and enhanced releases on Vita and PlayStation 4. None of these made it to the West until now. Bandai Namco finally localised not just one but both God Eater games available on current generation platforms in Japan with English voice acting. I never thought I’d get to play God Eater 2 and considered buying the Japanese release multiple times, so it’s great that they’ve finally done it.

All copies of God Eater 2 Rage Burst come with a code or include a download for God Eater Resurrection (an enhanced remake of Gods Eater Burst) and I encourage you to play that before jumping into Rage Burst even though it can be enjoyed standalone.

A new pandemic with no cure has struck and you’ve been recruited into the Blood section of the God Eaters. Your job is to eradicate Aragami, huge monsters invincible to traditional weapons that can only be dealt with by God Arc-wielders, who are known as God Eaters. Throughout Rage Burst you are introduced to new characters who join you in missions. Since God Eater is a handheld franchise, all remakes and enhanced releases still have the structure of a handheld experience. This means you have a hub where you get into a fixed routine more or less where you accept a mission, set your gear and weapon loadout, and get into said mission. There will be cutscenes for the story here and there, but the basic structure has you following that pattern.

Where things get really interesting is the combat and deep customisation available. For one, you get to switch between mêlée and ranged weapons at anytime with the press of a button. Depending on how the Aragami moves, you need to decide which type of weapon to use and, if you choose a gun, what bullet to use. The AI teammates you get to take along on missions are also useful because this is one of the rare franchises where AI teammates actually are useful and don’t rely on you for everything. You get to customise your weapons and see the stats change, and also have a variety of items in your inventory for use on missions. One thing to note about combat is the devour ability that you activate by holding Triangle to consume parts of the Aragami. This ability is essential to gaining back oracle points and even health points later on. Blood Arts are an interesting mechanic that reward you for attacking correctly with new or enhanced moves when you have “awakened” them. One major annoyance during combat is the lack of feedback. In many cases it doesn’t feel like you’ve been hit. God Eater 2 also features online multiplayer with up to 4 people at once and it is a hell of a lot of fun hunting together.

Another drawback of being a handheld game enhanced for the big screen is visual fidelity. While we have seen some fantastic transitions from portable to home console like Gravity Rush Remastered, there have also been poorer transitions like Final Fantasy Type 0 HD. This title is more akin to the latter when it comes to visuals. There are tons of flat environments that look plain bad on my TV. Things are much better on Vita with the lower resolution display but I wish more effort had been put into improving the visuals of a game that started out on PSP but is now on PlayStation 4. I can look past this stuff during combat but the hub world and in-engine cutscenes look disappointing compared to character models. It is also sad to see so many assets and areas reused from the first entry in the franchise. Thankfully, the music and voice acting are great. In fact everything from the catchy opening to the leitmotifs in the score showcase just how talented and eclectic Go Shiina is. The soundtrack even features freaking Donna Burke. One negative for some fans will be the lack of Japanese audio as an option for voice acting. I really enjoy the voice acting in English but if you were expecting dual audio, look elsewhere. The controller speaker is also used for some dialogue that makes it seem like a walkie talkie.

If you’ve been aching for a good hunting game on home consoles or just have been looking for one with a good story and great music in addition to deep combat, God Eater 2 Rage Burst is the game for you. Even with its flaws, it’s a ton of fun hunting Aragami online and offline daily.

God Eater 2 Rage Burst is a fantastic entry in the hunting genre for fans who want deep combat and a good story to keep you invested along the way.