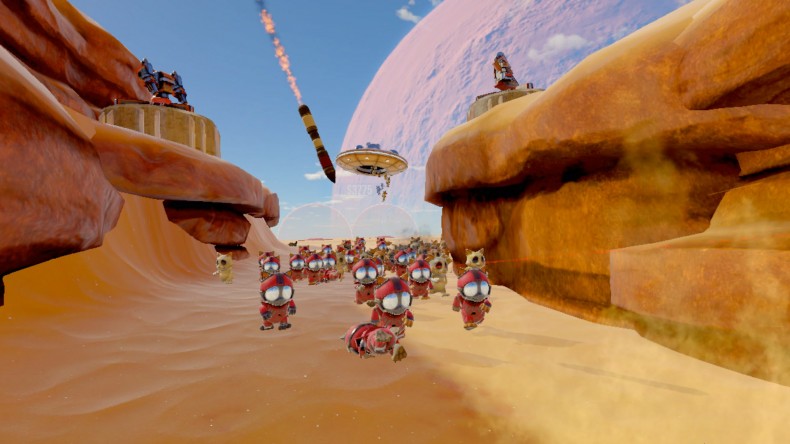 Kittypocalypse allows you to experience the dream – I’m sorry, I mean horror – of blasting, zapping and exploding an army of cute kittens. Of course there’s more to it than the gleeful – sorry, I mean deplorable – massacring of cats for sport; this is a first-person tower defense game built exclusively for VR.

As it turns out, this sickeningly saccharine – sorry, I mean cute – army of kittens are in fact aliens in disguise that mean to destroy you. It’s up to you to mount a defence against the killer kitties, erecting towers with all manner of weapons affixed to cut them down as they waddle ever closer to your base.

From here on out, Kittypocalypse is precisely what you’d expect from the genre. Each level places you on a different island with new terrain and placements for your precious bases, offering you the puzzle of strategically placing your towers of death in order to quell the invading felines. And that in itself is amusing, challenging and fun. A pleasant selection of terrains keeps thing visually interesting and poses new challenges, meanwhile, the strategy of placing towers in the most effective areas while managing the cost is rewarding, with a big part of that reward being the cathartic annihilation of dozens of kittens. Witnessing the adorable beasts march towards your fiendish traps is quite the boon. Moreover, the VR aspect of Kittypocalypse grants you the ability to fly around the islands to your heart’s content, allowing you to practically feel the green blood of your furry alien enemies splatter against your face. Or perhaps you’ll prefer hover high above the carnage in order to better manage the battlefield. In fact, the latter is largely what you’ll be doing; as fun as it is to go anywhere and watch from any angle and elevation in order to best conquer each level, having a bird’s eye view helps. This fights against the idea of Kittypocalypse being in VR at all. However, although the optimal camera position may be of the traditional nature, the VR capabilities are a nice extra and prove that genre isn’t necessarily a barrier to VR.

And there truly is a spectacle to behold if you do zoom in, thanks to a variety of different weapon types – from machine guns for maiming and bubble guns for slowing foes down – all of which can be upgraded, you’ve always got the tools to hand to deal with the ever-increasing number of kittens that attack on each wave, and plenty of delightful feline dismemberment to crunch popcorn to. The cartoon aesthetic and bright colour palette ensures the kitty massacre is always splendid. Levels typically last anywhere from 10-20 minutes with each adding a new enemy class to deal with, as well as the corresponding weapons and upgrades to counter them. However, you’ll find little handholding in this fight, so expect heavy resistance from the alien kitties and the unfortunate trial and error method of figuring out how best to conquer a level. You’ll often find yourself up against a class of enemy that requires a specific weapon and upgrade to beat, punishing you significantly if you’ve placed the wrong kind of towers.

Of course, this puzzle-like mechanic of figuring out which towers suit a particular class of foe best, along with the most effective place to build them and when to build them between waves, is a big part of the genre’s appeal, and certainly fans of Tower Defence will find Kittypocalypse’s special take on the formula very familiar and fun. However, tactical variety appears to be an illusion, with many of the later levels restricted to single solutions to complete. This also proves true if you wish to complete all the side objectives offered in each level, with challenges such as deploying a maximum number of towers, spending up to a certain amount of money, and restricting the amount of damage the cores of your bases suffer due the kitten attacks, all conspiring to lead you down a very specific build path.

Kittypocalypse is a fun Tower Defence title, one with a stiff enough challenge and enough side objectives to keep your VR headset firmly attached to your head, but it’s not the most cohesive VR experience. Whilst the movement is excellent and you feel god-like as you float above it all, only one camera angle suits the experience. Still, there’s plenty of deranged joy to be found in watching the action up close occasionally.

The VR feels more like a delightful addition rather than an integral part of the experience, but there’s no denying how much fun it is to slaughter the cute alien kitty menace.