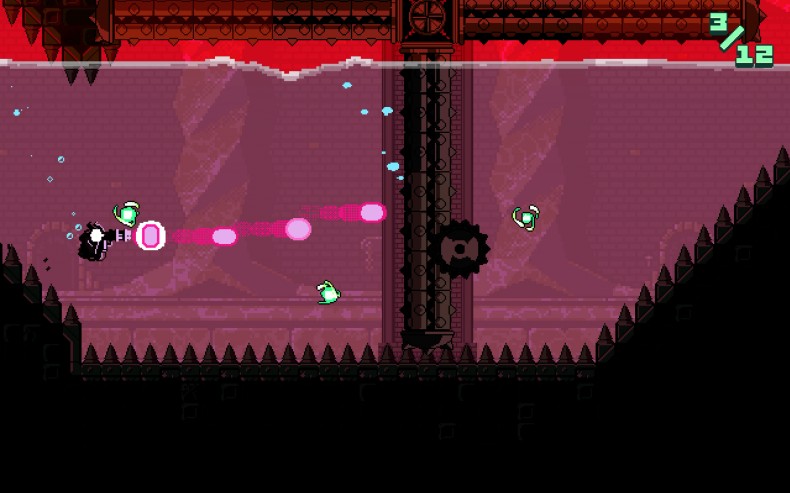 RunGunJumpGun is a twitch-heavy 2D platformer that’ll drive you mad. The gruelling task of getting from one end of the level to the next just gets harder and harder until you’re caught in an orchestra of pulsing fire cannons, circular spinning saws and jagged rocks that look like the teeth of an unruly wild animal. You’ll cry, scream and swear until your lungs are void of air and your throat feels like it’s been savaged by sandpaper, but you’ll keep going back for more.

Like Super Meat Boy, Velocibox and Hotline Miami, RunGunJumpGun makes you want to keep going. It punishes you relentlessly, but there is a white light at the end of the tunnel. Once you start to get used to the simple mechanics, obstacles can be measured and you’ll begin to use the game’s physics in your favour. There are three planets in total, with tons of varied and challenging levels; in the beginning you’ll find them tough, but you’ll gradually start to work them out and get through the various sectors. It isn’t until later on that the game really pushes you to the absolute limit.

You only have to worry about jumping and shooting; as the screen moves from left to right, you have to judge when to jump (and hold it in) and shoot. There are barricades to blow up and you can also shoot away the spinning blades, turrets and other obstacles in your way, but you also have to make sure you’re in a good position to do so because you don’t want your velocity or your position to suffer. Spaces get tighter and obstacles become more fruitful as you progress, so the need for expert precision and a steady hand is important.

To progress you must collect Atomiks, little orbs scattered along the different levels. It’s almost impossible to collect every one on every level, but for those of you who like it hard, you’ll most certainly rise to the challenge. Once you’ve collected enough, the next planet will unlock and you can go and get punished even harder than before.

RunGunJumpGun takes its influences from games like Metroid, with the floating spaceman sharing the same look as Samus, while the pixel-laden visuals and minimal colour palette harks back to the Spectrum ZX days. There are some weird-looking characters that appear in between levels, but apart from looking like cheap Doctor Who villains, they don’t really add anything to it. I’d rather the game focused solely on the gameplay and less on the attempt at a story, but it isn’t the be all and end all. The soundtrack is comprised of industrial electro beats and synths, providing a relentless, pulsating soundtrack to accommodate your long list of deaths and failures.

There are some insanely tough moments in RunGunJumpGun. There’s a level in the third sector of the first world called “Labsynth” and it reminded me so much of that level in Teenage Mutant Ninja Turtles on the NES. Reaching the end of it felt bloody marvellous as I could never get past the TMNT level it was reminiscent of. There are plenty of challenges throughout RunGunJumpGun and ThirtyThree has managed to make them all feel unique. I can’t say I thoroughly enjoyed playing it – mainly because I’m not the best at twitch-heavy shooters, but for those in need of a tough as nails 2D platformer, this is the one you’ve been waiting for.

If you like to be pushed to the absolute limit, the twitch-heavy gameplay and punishing level design will do just that, crushing your spirit along the way.