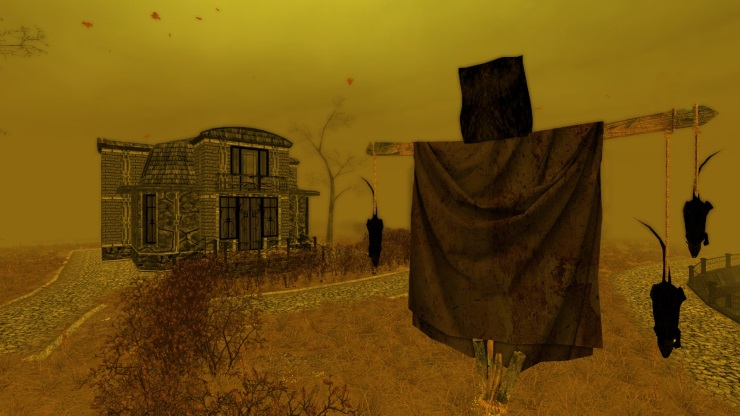 The filthy bronze sky is bereft of light, and the monotony of every dank street takes its toll. I can hear dogs barking, clocks chiming, and the sound of rope straining with the weight of something heavy; possibly the body of an unfortunate hanged for punishment or ritual – I don’t know. I know nothing. This town is steeped in darkness and evil. My presence is unwanted and my time is running out. There is a chance I will die here, and that one thought scares me more than anything. Welcome to the horrifying world of Pathologic.

Many games are categorised as “survival horror”, but Pathologic Classic HD truly deserves it. Originally released almost 10 years ago, Pathologic is a story of an ill-fated town and its inhabitants as they suffer at the hands of a fatal plague. The game has been enhanced and updated for a wider audience to include a number of new features; for a start, the dialogue is now in English so that international audiences outside of Russia can enjoy it. To partner the new text, the game has had brand new voiceovers that are just as bizarre as the script itself. Listening to some of the characters talk is downright uncomfortable. Their monotonous tone and drawn-out sentences add to the distressing experience. The storyline is engrossing and full of real horror – the kind of disturbing horror that doesn’t require gallons of blood and jump scares. Instead, it is a smart tale with a Lovecraftian intelligence to it that is only sometimes marred by dubious translation in the text. You play as 3 different characters who have their own stories to tell, each with different paths to take, but all interconnected. You have 12 days to solve the mysteries of the town and if you take too long to do so, your journey is over and you’ll be sent back to the beginning. The first time it happened, it was only day one and I had no idea what was going on. A strange video started and my confusion led to frustration. Suddenly, the main menu appeared and I realised I had failed in my story and had failed the town I was trying to save. The game is difficult, but not necessarily in ways you’re familiar with.

With every step you take along the way, a hand appears on a location on your map. Sometimes it’s obvious how to get to the next part, but other times you’ll be wandering around the map for substantial amounts of time. There is a lot of emphasis on freedom and on you as a person; you are free to roam around as you will, but the themes of trust, fate, hope and judgement play a massive part in the overall story; make sure you are smart with your choices and how you treat those around you because it can greatly affect your personal adventure, I promise you that. You have your own health to take care of too. You need to eat, sleep and survive just as much as everyone else. Raid bins, houses and abandoned storage boxes to find equipment to help you on your way, and there will be money on the streets that’ll help you buy supplies and food from the shopkeeper (interestingly, it’s the same shopkeeper in every shop – is that lazy programming or a purposeful inclusion?).

Textures and visuals have been improved since the original; however, they are still pretty terrible in the grand scheme of things. If you’ve played the original, you will know what the game looks like and it will either be a big deal or not. It never really bothered me though. It isn’t trying to blow you away with fantastic 3D models of its characters and environments. Take Fallout 3 for example: the visuals were far from great, but the story itself and the content within was far superior to a lot of its peers.

The look of the game only adds to how old the game feels. Walking around the bleak town and seeing the same people was reminiscent of old horror movies like The Wicker Man and Don’t Look Now. A sepia haze bleeds into the design of the world, creating an uncomfortable feeling in your stomach, and the way people move is really creepy, although I think that is more down to the budget with which the game was built. The sound design is exceptional and the horrific audio effects do nothing to help your nerves. The deep chime of the town clock striking on the hour reminds you of your plight, with the barking of dogs and the cawing of crows aiding the atmosphere. The soundtrack is in equal parts eerie and frantic, with the simplest of music used to great affect; elongated keyboard chords played as you lurk around the streets create an uneasy feeling, and it’s evident that the composers have taken inspiration from the great Hammer Horror films of old.

Pathologic Classic HD is a fantastic game developed by a small indie team with a genuine and obvious love of smart, psychological horror. The game is challenging and you will feel alone without anyone to hold your hand and this is the best thing about it; you will be psychologically and emotionally tested like you never have before. There are framerate issues and the general look is poor in comparison to a lot of open-word games already out there, but if you are willing to give Pathologic a chance, I guarantee you won’t be disappointed.

Everything a great horror game should be, with a fantastic story and a beautifully bleak world to explore.