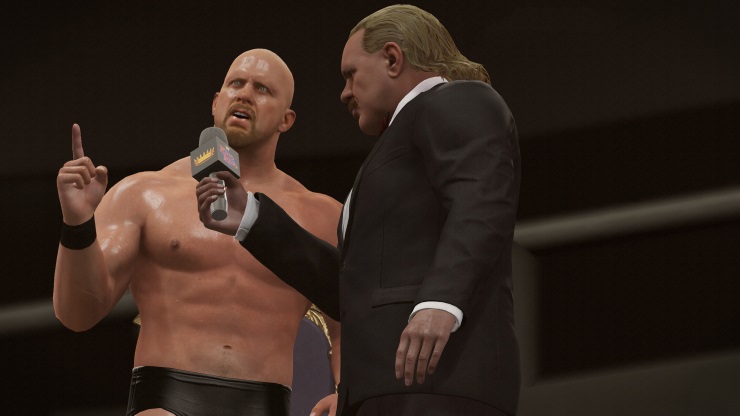 I’ve been waiting for 2K to bring this kind of WWE experience to me ever since they took over the franchise from THQ. For those who played last year’s release, WWE 2K15 was pretty bad; an anaemic shell for what the current gen of sports entertainment games could have been. It felt empty and void of any real content, with very few game modes, a weak roster and a 2K showcase that was all in all a vacuous experience that could have been so much more.

In contrast, WWE 2K16 plays like a dream, looks like the real thing and provides a far closer experience to watching Raw and Smackdown than ever before. Stepping into the squared circle gave me goosebumps. I took charge of the Viper, Randy Orton and went toe to toe with Ryback in what was an authentic and exhilarating match up. Instantly I could see the hard work put in by Yukes and Visual Concepts; in terms of gameplay, this is one of the finest wrestling titles since Wrestlemania 2000 on the N64. If it weren’t for a couple of annoying new mini-game systems, it probably would have been the best. The pace has been slowed down with the implementation of collar and elbow tie ups and working holds, meaning that the old arcade feel has all but gone. The collar and elbow system was introduced last year, but it felt overused and out of place, especially when it appeared in almost every opening. This year, it feels natural and refined; it now feels like a tool to control the fight rather than a fancy new feature that gets shoved down your throat. Working holds have also been added to help regulate the pace. They are the perfect tool to help you regain stamina while also taking advantage of your opponent.

As mentioned, some of the new systems don’t work particularly well, especially when it comes to being pinned. If you’ve taken a decent amount of damage, you’re a lot weaker and more susceptible to losing, obviously. Unfortunately, whether you’ve still managed to dominate your opponent in the process, all your hard work will be pointless because you were unable to kick out by pressing the right button in time. You get three chances to stop the gauge in the correct spot (similar to taking a penalty in FIFA or a free throw in NBA 2K), and the weaker you are, the smaller the window. Even if you’ve taken a few suplexes, it’s enough to make you lose. The submission meter is equally frustrating. Trying to get your red bar to overlap your opponents for a considerable amount of time can take forever, and when you are on the receiving end – much like the pin – you will find matches can be won way too quickly and unrealistically. Perhaps the greatest overhaul in this year’s offering is the reversal system. You can’t reverse every move like before; instead you have a yellow bar on your HUD that indicates how many times you can press the reverse button. You still need to time it right, but when that bar has depleted, you won’t be able to stop your opponent’s assault. If you use it too much to stop a punch or kick, you’ll be completely helpless and exposed and at the complete mercy of your rival; not having the ability to reverse an F5 or Tombstone will leave you out for the three-count, and while reserving your reversals will block the more powerful moves, it also looks good and gives you the confidence to turn the tide of battle.

Even the smaller features help with the flow of a match. Wrestlers like Brock Lesnar and Rusev have managers than can interfere and affect the outcome, with Lana and Paul Heyman climbing on the apron and distracting the referee. Features like rolling in and out of the ring can take the pressure off, especially when you’ve been taking a significant beating. It’ll allow you to catch your breath and regain stamina so that you can try and change the rhythm of the match in your favour. Watching the superstars’ entrances and the action unfold in the ring has never looked so good. All but a few wrestlers look lifelike and the finer details give the game a polished veneer. Previous years’ models have been used for certain wrestlers; however, it is in no way off-putting and doesn’t really tarnish the experience. The animations between the action flow beautifully with only a few issues here and there. For example, in fatal-4-ways or Elimination Chambers, your ability to attack different superstars becomes lost, and you end up punching and grabbing the air.

WWE 2K16 boasts the largest roster ever, and you almost feel overwhelmed by the choice of who to wrestle with. You have the majority of current WWE superstars to choose from, including the Divas division and NXT. There is no cutting corners with their presentation either; Finn Balor’s entrance and appearance is just as good as say, Seth Rollins or John Cena, and every quirk and character trait is present.

The Creation Suite is back to its best. The opportunity to create Divas, championships, arenas and shows are back, along with a whole host of new improvements to all the other features. Before you embark on the vastly enriched MyCareer, you can spend hours making sure that the created wrestler you’ll be playing as is as close to perfect as you want them. Speaking of MyCareer, you now actually embark on a career as opposed to a single year in your superstar’s life; a whopping 15 years means that you have the chance to really make something of yourself. In the early years, you’ll make your way up the NXT ranks before heading into Raw and Smackdown, and as you do so, you’ll be able to increase your skills and improve your abilities. It can be frustrating at times, however, especially when you have given a match absolutely everything. You start with an overall skill level of 60, so already your opponents are at an advantage. If you make a single mistake, your opponent builds momentum faster and inflicts more damage, and with lower stats, be prepared to lose. Throw the iffy pinning and submissions systems into the mix and you’ll find that losing becomes an unfortunate consistency. You will win in time, but the learning curve can be a little exasperating.

In MyCareer, you are given a list early on that shows you what you need to do to get yourself a spot in the Hall of Fame, such as a holding a title for 365 days or becoming a 10-time champion. These goals give the improved mode added grandeur, and you’ll be keeping an eye on the list to make sure you join the ranks of Randy Savage and The Rock. There are tons of features that have been added which make this year’s offering a lot better. The Authority has been added to either mess up or aid your plans and the post-match interviews help to create an authentic experience, even if they are a little repetitive. The 2K Showcase is excellent. Much like the fantastic “30 years of Wrestlemania” Showcase from WWE 2K14, the nostalgia hits you like an RKO. You head back in time to the very beginning of Stone Cold Steve Austin’s career, participating in some of his greatest ever matches. It reminds you of the legacy of Stone Cold and how significant he was in the birth of the Attitude era. Like previous showcases, you complete in-match criteria to progress to the next match and earn a ton of new arenas, outfits and content to play with. This could quite possibly be the best 2K Showcase to date and that’s the bottom line, cause Stone Cold (or I) said so!

WWE Universe is back with minor improvements that build on the already fantastic mode. You can create up to seven matches and include rivalries that have more features than last year’s. You can also assign superstars to multiple shows, meaning you can pop up on Raw, Smackdown and NXT if you want.

Taken as a whole, WWE 2K16 is so much better than the previous entry and is a significant step in the right direction for the future of the series. There are certain things that need to be re-evaluated for next year, and those horrific 2K servers prevented me from having more than one match online, but overall the game is great. Fundamentally, wrestling has never been this realistic and the excitement to be had with WWE 2K16 can’t be rivaled.

The most realistic in-ring experience to date
Improved MyCareer mode.
Loads of unlockables and challenges.

WWE 2K16 is the team back on their way to greatness, and a definite turning point in how wrestling games should be made.