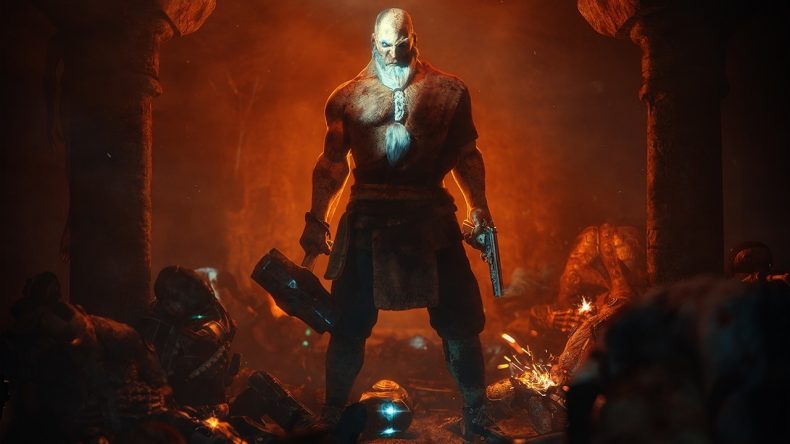 In a gaming climate where survival, MOBAs, and arena shooters have made a real surge to popularity in recent years, there’s definite a niche for the brawler/beat-‘em-up style of games to make a triumphant return. Having spent my childhood playing games like Streets of Rage, Double Dragon, and Golden Axe, I am very much in the mood for more of these classic styles to resurface.

A quick glance at Redeemer will show you a top-down beat-‘em-up wherein you are playing as Vasily, a Russian ex-military, who’s sworn off violence for a tranquil life as a monk in a hidden location. Of course, that location doesn’t remain hidden for long and a band of seemingly well-funded mercenaries interrupt your meditation. The beast awakens within Vasily, propelling him back into the violent world of smacking the shit out of everyone and everything in sight whether they pose a threat or not. Without even a modicum of remorse, he goes back to work. This man was great at his job. The combat is fairly easy to pick up and won’t leave you stumped in the slightest. A button to punch, one to kick, block, roll, pick up and throw objects, and another to stealth kill/execute your enemies are in your arsenal from the very beginning. Punches are fast while kicks sweep out hitting multiple enemies, so you can quite comfortably use only these for the opening sections of the game without requiring any further thought on the matter. Holding either of the attack buttons will charge up a powerful punch or kick but, in the chaotic melee with hoards of enemies, you’re just as well to repeatedly kick everything; however, should that become tedious you can change it up with a punch or two. Every so often you’ll need to block or parry. Like Assassin’s Creed or Shadow of Mordor, though, this is achieved by the press of a single button at the right time without much else involved.

The later introduction of firearms changes the dynamic slightly to allow you to quickly dispatch enemies who are adamant not to get punched in the face, though I found myself only ever using them where I needed to. Some enemies are resilient to unarmed combat, while there are mutant enemies that you don’t want to be next to ever, so you’ll likely find yourself holding on to firearms for these encounters. The ability to disarm enemies – literally in the case of smaller mutants, whose arms make wonderful bats – introduces an additional mechanic at your disposal to vary the combat, but once again this is a cool feature that was rarely utilised. Immensely satisfying to execute; nary a time where it’s applicable when you’re the centre-point of a mutant mosh pit.

Narratively speaking, Redeemer would have been a perfect game for a parody that doesn’t take itself seriously. Vasily flips from a soldier looking for redemption after leaving the horrors of war, to an avenger trying to save his fellow monastic brothers from capture by Bad Guys Incorporated – known as AltaTech. You’re wading through them at breakneck pace, sometimes literally if you can get a stealthy takedown, and it’s an almost comical amount of bodies you leave in your wake like as if you’re in an action movie from days of yore. Punctuating these moments with humorous quips or one-liners, Schwarzenegger or Duke Nukem-style, would add a level of comedy to an otherwise rather grim tone.

That’s not to say that the game is gratuitously violent or gory. With the camera being zoomed out and looking down on the destruction in a detached manner, only zooming in close only for finishing blows on the last remaining enemy, you’re far removed from the viscera that would otherwise make this game immeasurably darker. It does feel like a missed opportunity for tonal variation that would add charm and character to the game, though. The story plays out like a teenage boy reading an excerpt of Charlotte Brontë’s in front of class, monotonous and a little uninterested, lacking any form of delivery. It’s not terrible, but it’s also not brilliant either. The bad guys are bad, the good guy is not bad – despite his fists being the physical manifestation of Death – and the mutants are obviously meaty punching upon which you must unleash pain.

By the time I finished playing, I’d had my fill. It was fun for a while. It offered a level of disengagement and enough of a suspension from reality to be a good distraction. It’ll provide 6-8 hours of catharsis to anyone that’s looking to unplug the brain with something that doesn’t require a great deal of attention, and for that alone I had a decent amount of fun. It won’t offer you deeper meaning, but sometimes that’s just fine.

A game that held a lot of potential. Five or ten years ago, this game would have been an exceptional 2-player co-op brawler à la Gauntlet or Golden Axe. Today it’s a forgettable, short distraction that you’re unlikely to play through a second time.