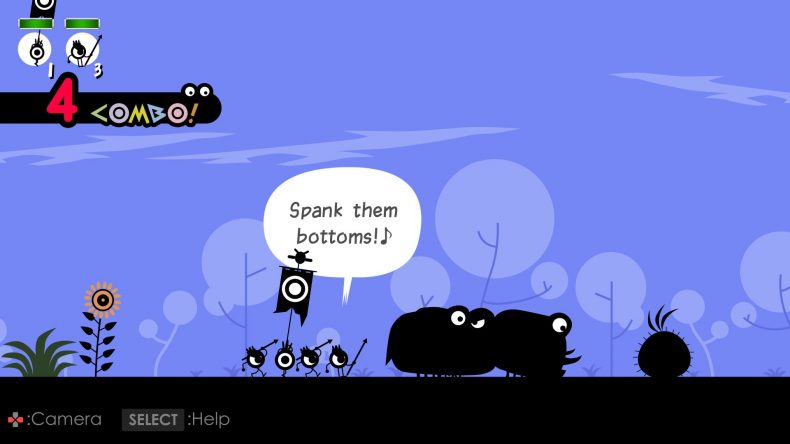 While I’ve mostly managed to catch up to all the great releases on the PlayStation Vita, I never owned a PSP so that catalogue has always been waiting for me. The same thing happened on the 3DS when I discovered the DS games. Out of all the PSP games from Sony, LocoRoco is definitely my favourite and I absolutely loved replaying it on PS4. Patapon is something I had heard a lot about but never played. I even own it on Vita as a PSP game. Over the last week I’ve been playing Patapon Remastered on PS4 and the team has done a pretty good job with the remaster.

Patapon is a 2D rhythm game with strategy elements deeply woven into its DNA. You play as the Almighty who controls a tribe of Patapon. The tribe is in a bad situation early on until you help them get back on their feet figuratively and take back what was stolen from them. There are several missions and mini games to unlock better items and equipment as well. Gameplay involves you using the face buttons on the Dualshock 4 to input a sequence which results in a drum pattern. Each of the face buttons is represented by a talking drum in game. Depending on the situation you can use different sequences to say move ahead or attack or even execute a miracle which is a big spell. Every sequence must be input going along with the beat which has a nifty visual cue because the audio mix has issues but I’ll get to that in a bit. When you’re in the groove and fully into things, Patapon is a joy. It is pretty difficult early on but sticking with it is worth the effort. Getting a string of proper sequences will increase your combo count and get you into Fever mode. This has more damage dealt to enemies, more defence for you, and various other boosts as a limited time bonus.

This is a remaster of a PSP game after all and it could have been way better. For one, the 2D art has allowed for the gorgeous gameplay to look even better on the big screen. There are no performance issues and load times are fairly short. The problem lies in the videos and some UI elements. The opening and some of the tutorial videos use the PSP footage which looks damn blurry. I wish they had gone and redone the footage for this release because it breaks immersion. The UI also has some issues with the scaling. The icons and text for various things in the menu aren’t as good looking as they should be and feel out of place. While I’ve already gotten used to and enjoy the main sounds and music, the audio mix has some problems. In hectic situations, keeping up with the beat while there’s a ton of stuff happening is a little difficult. The visual cue for the beat most definitely helps though. The samples for the sounds are great though but I hope they fix the mix.

Bringing a classic game to modern platforms is always quite the task. Final Fantasy Type 0 HD had loads of issues while Final Fantasy XII The Zodiac Age transitioned brilliantly to the PS4. Patapon falls into the category of a great game being given a not so great remaster. There aren’t even new features like leaderboards which would encourage replaying stages. If you play on a TV and not a monitor, you might encounter some input lag. While many rhythm games on the big screen allow for input calibration, Patapon does not and this is quite the flaw.

I wish Patapon had been given a better remaster. It is still fun and worth checking out if you’re a fan of rhythm games and want to try something new. The flaws definitely ruin what could be a fantastic experience otherwise

Patapon Remastered is let down by an input lag issue and some low resolution assets ruining an otherwise fantastic game.