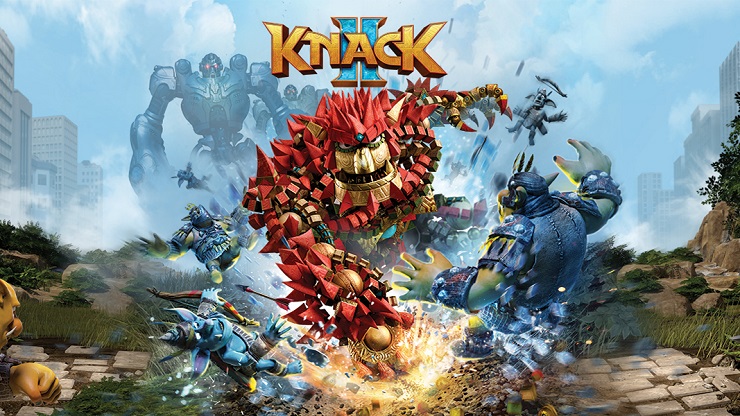 Knack has become the butt of many jokes since the PlayStation 4 came out, lambasted for its lack of originality, poor story, and dodgy checkpoint balancing to name but a few complaints. I always thought it was a bit harsh – a bit unfair, but hey, if people don’t like something, they let everyone know, and many benched this PS4 console exclusive in favour of anything else. Surely a sequel is a bad idea? Surely making another game based on a character that seldom folk cared about is a waste of money, of developers, and of time? Folks, I want to let you in on a little secret – Knack 2 is a good game. In fact, it is a fantastic achievement and has overcome the odds, wiping the slate clean. This is a vibrant and fun platformer that wears its heart on its sleeve, and offers itself to the people who love video games for what they are.

It’s amazing how much has gone in to making gameplay more robust that its predecessor, with the typical punches and kicks featuring layers to improve your time with it. Learning stronger punches and kicks helps to break through certain enemy defenses, like those Goblins that have big shields to protect them, or the giant robots that have many layers of armour on, and certain strong attacks provides more of a range when using it. You’ll find that the more you play, the more you’ll learn, and you can find new moves from lots of different places, like Ava, and the skill trees you unlock.

You can block projectiles with your shield, and pressing L1 at the right time allows you to parry them straight back to the source and causing damage. You can also throw environmental objects at enemies, fire from a turret, cause damage from above by flattening them, along with harnessing the power of Super Crystals that provide a boost. Smashing these crystals (which are placed sporadically throughout the game, often when there are major battles) allows you to use special moves to take out large groups of enemies in a heartbeat, and new moves can be learned by using little Knack to find Monuments within the world. There are also parts of gadgets scattered throughout the levels, and collecting all the parts needed will allow you to make these gadgets – they’re basically gameplay enhancers you can switch on or off at will. Pressing R1 makes you switch between being the big lovable brute, or the silent, cutesy Knack, and the game requires an equal spread of both to progress. The bigger Knack is, the more dangerous he can be, and collecting scattered Relics increases his size (his height is noted in the top left of the screen, which is a nice touch) to the point where you’ll do much more damage to enemies. It’s great watching a 20ft Knack trample over enemies and boxes alike, being a force to be reckoned with, but it slows you down a bit compared to when you’re smaller. Perhaps my favourite thing about Knack 2 is the Special Knacks you get to use, such as Ice Knack, or good old faithful Stealth Knack. Certain levels give you the chance to harness the powers of the environment and adding these powers give you more moves, such as hammer fists (when equipping iron), and freezing your enemies on the spot (when equipping ice). These Special Knacks also help you to solve puzzles and progress through the levels, adding more layers to the gameplay.

By collecting Sunstones, you’ll build up a shield of sorts, protecting your health bar until the stones run out. It’s also imperative you collect Relic Energy, as this will allow you to progress through the four skill trees. These trees aren’t all available from the start, but as you unlock them, you’ll understand why. Yet again, another controlled progression within Knack 2’s systems that help to improve the gradual flow of gameplay, and give you the right skills at the right time. Knack 2 gets the balance of character progression just right: it’s never too overwhelming, and having new moves given to you at a steady pace helps you to remember your skill set. It feels like it’s aimed at a younger audience – which is fine – and having a lighter pace makes it more enjoyable. You will find enemies get tougher, but there are difficulty levels you can choose between, so if the game is too hard just change it. Knack 2 is more about the journey, about the fun you’ll have traversing the world, and the engaging combat you get to dabble with. There are plenty of puzzles in Knack 2 too, some can take a bit of time to work out, and others are instantly solved. If you do struggle, a prompt will appear giving you the chance to see how to solve it.

The level design is both challenging and gorgeous. The moving platforms, rolling spikes, disappearing blocks, and crumbling stepping stones are spread evenly, and incorporating tricky climbs for both big and small Knack is done well. It feels like the good old days, where platformers could be hard, but conquerable, and breezing through the obstacles and the scenery was satisfying. Visually, Knack 2 is gorgeous. It feels like it’s taken inspiration from a whole range of PlayStation classics, namely Uncharted and Crash Bandicoot. It’s colourful, constantly changing, and always showing off the fine artists at Japan Studio.

Whilst it may take some time to get going, Knack 2’s story is pretty good, and there are some twists and turns along the way, but the characters are rather dull. Lucas is so damn annoying; he’s like a spoiled brat, every now and again belittling Knack and being an all-round cocky teenager. Maybe that’s the problem: I’m just old and have no tolerance for a cheeky youngster, but that argument is for another time. It all plays second fiddle to the action – which is fine, but I would’ve liked more of a deeper narrative within the main characters, as on the whole, they’re all rather forgettable. Except Knack, who is awesome.

I think many will find lots to love in the combat, progression, world-building, and its heart. Go into it with an open mind, and don’t go in with the notion it’ll be bad because of the original. Knack 2 deserves to be enjoyed by those who love to play video games because they’re fun, and they bring people together, which this game does thanks to the drop-in and drop-out of co-op – there are certain moves that can be done as in co-op that can’t be done anywhere else (punching your partner and their relics firing at the enemy or becoming a cannonball to name a few). Knack 2 is easy to pick up and play, and keeps you coming back for more.

Lucas is annoying
Story is generic
Can be easy in parts

If you're looking for a great platformer to play on your own or with friends, this is the one for you. It's fun and it looks gorgeous, filled with combat that provides lots of options to defeat the goblins and the robots.