previous
Slain: Back from Hell Review
random
next
Dragon Quest VIII: Journey of the Cursed King Review
1 like 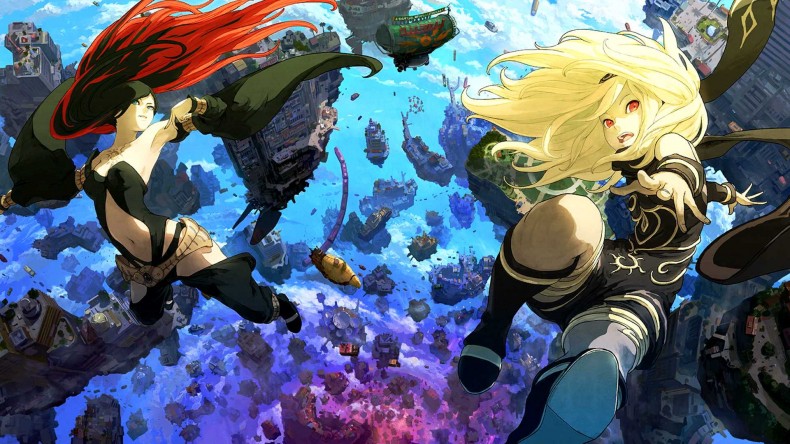 Bigger isn’t always better, but in Gravity Rush 2’s case, the size and scale add plenty to make it superior to the original. The freedom you have and the visual fidelity in every frame make Gravity Rush 2 a lot of fun to play, even if the combat and movement can sometimes get a bit too much.

The story starts with series hero Kat, and her relatively lazy and entitled douchebag friend Syd (sorry, but I really don’t like him), arriving in the mining settlement of Banga after being sucked into a gravitational black hole. You spend a few hours learning the ropes in Banga, and the story’s foundations are built pretty well, even if you do start to notice some odd quirks in a few of the characters. Kat comes across as a bit insecure, even though she’s an all-powerful, loveable character, but that might be down to the way she’s treated. Syd’s continually annoying, building the occasional tool to help out, but his ‘funny’ outbursts outstay their welcome early on.

There are some interesting new characters though, and they all start to play a role in Kat’s adventure. Lisa is in charge of Banga, and has a heart of gold under her stern demeanour, Vogo is a merchant who appears unfavourable at the start, Li is his noble bodyguard, Cecie is Kat’s reserved friend, and Misai is an admirer of Kat, and one of the hardest workers in Banga. You learn more about all of them as the story goes on, and thankfully, once the story moves out of Banga, things get much more interesting. Gravity Rush 2 is a huge game, doubling the size (and then some) of the original, not only in scale, but with the amount of missions and challenges. The Banga settlement isn’t very big, but it’s packed with detail, ranging from cargo airships and various platforms tethered together by rickety bridges. After visiting the mysterious Rift Plane, you’ll eventually arrive in Jirga Para Lhao, and honestly, it’s one of the best looking cities in modern gaming. Imagine a mix of Cuba, Lestallum (from FFXV) and a neo futuristic Tokyo, and you’re about there. It’s massive, too, and there’re so many opportunities to try out all of the skills you’ve learned. The moment I realised how big this city was was when I’d spent a good hour flying around, doing a few side quests and chatting with the locals (who often give you a compliment or two), and my gravity power had ran out temporarily; I dropped to the underbelly of the city, only to find a dilapidated city unlike the rather pleasant one above – a whole other city under a city. Madness!

Kat can still manipulate gravity and by pressing R1, she’ll start to float, allowing the fun to begin. You can fly about by pressing R1 again in the direction your cursor is pointing, and the two gravity styles (Lunar and Jupiter) add speed or power, depending on which one you use. You can fly through the air and attack the Nevi (who return from the original) with blistering aplomb, all with the touch of a button. Stasis fields are also great to use, allowing you to suck in nearby objects and using them against your enemies by launching them at their weak spots. All of your abilities when using gravity can be upgraded, and so can your combat – you just need to find or earn precious gems, which act as currency for your skills. As much fun as it can be, moving from one place to another (especially in the heat of battle) can be tricky, and you’ll often find the camera your worst enemy. You can have a swarm of bad guys in and out of your view, and although you can sometimes lock on, the challenge of killing them all can be tough. Even flying towards the top of the buildings, through the streets and down to the depths of its shanty towns can result in the camera ending up in a weird place.

Outside of the story missions, there’s an abundance of side missions and challenges, such as races and time attacks. You can find challenges created by other online players as well, similar to the online elements of Mirrors Edge Catalyst. You can also take part in treasure hunts, which require you to take the same photo as the one in the challenge; one I did had me standing between two of the city’s largest buildings, next to an apple treasure chest.

Gravity Rush 2 is a lot of fun, and has many things to love, including the return of the lovely Raven. Yep, she’s back to team up with Kat and unleash some cool tag team moves. Other than a few issues with camera angles and a story that can be troublesome when dealing with some of the characters, there’s so much to love. The art style is gorgeous; bringing the manga cutscenes to life with the comic book palette and design of the characters and the world. Technically it’s as smooth as an 80s movie lothario, running at a consistent frame rate throughout. Gravity Rush 2 is a fantastic game, and an impressive start to 2017.

Support us by buying from Amazon:

Vast and interesting
The art style is gorgeous
Plenty to do

It’s great playing with gravity, especially in such a stylistically designed world, and there’s so much more to do this time around.

Gravity Rush Sequel is On the Way