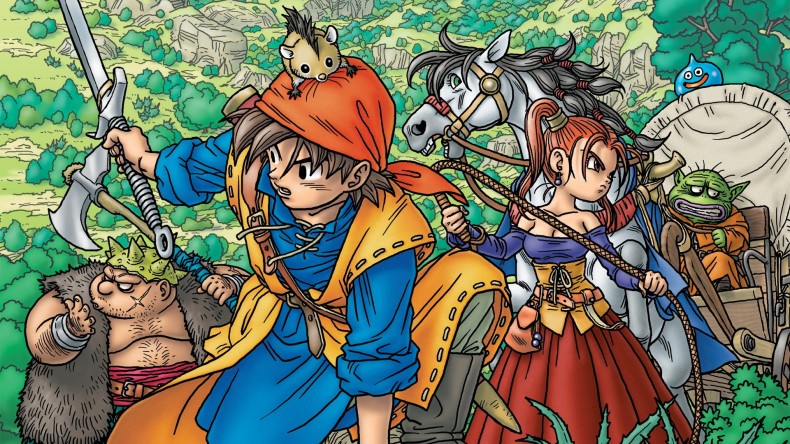 There are few JRPGs as engrossing as Dragon Quest. Final Fantasy maybe, Suikoden as well, and even Persona 4 Golden was pretty damn good, but there’s just something special about this particular series. When it was announced Dragon Quest VIII: Journey of the Cursed King was coming to the Nintendo 3DS in the west, many were happy they’d get to replay the adventure on the bus, tube, or even on their lunch break, but was it going to be a port without any additions or tweaks? Luckily, Square Enix has done a great job of keeping the original intact, whilst giving the 3DS version some nice new features that not only aid gameplay, but offer more content than ever before.

Dragon Quest VIII: Journey of the Cursed King centres around a hero and his friends as they set upon a quest to rid the kingdom of an evil jester and his dark magic. Dhoulmagus has turned the king into a frog, his daughter into a horse, and has wrapped their castle in an abundance of vines; all in all, things aren’t looking too good in the land of Trodain. It’s a fun story – one that never gets lost in its own silliness and light-heartedness, even when it’s at its darkest, and there are plenty of cutscenes (including new ones added for the game’s re-release) that help provide context. For those of you who are new to this game, don’t be put off by its slow start. You forget how uninformed you are as it begins, and how your first mission is a bit of a slog; as soon as you get to the heart of the first dungeon and beat Geyzer, everything begins to pick up and you’ll be free to explore Trodain to your hearts content.

Your main goal is to recruit friends to join your party and help you to bring down a wide range of monsters. You’ll start off with the loveable buffoon Yangus (who looks weirdly like Chris Griffin from Family Guy) at your side, always there to call you ‘guv’ in his Cockney accent and provide strong attacks using heavy weaponry like axes and clubs. As you move forward, you’ll meet Jessica and Angelo, a big breasted sorceress and a womanizing knight, who join your party to help battle Dhoulmagus. All characters can be levelled up, and new skills can be learned after allocating skill points gained in battle. You can also play as two new characters, Red and Morrie (former NPCs in the PS2 version), bringing up the tally of characters in a party to six. However, you can still only use up to four in battle.

Battles happen very similarly to other JRPGs; every encounter is turn-based, and you have plenty of options just how you fight. You can fight by attacking with force or using magic, heal you or your party, intimidate your enemies so they’ll run away or simply flee yourself. Each fight has variables, and each one of the vast amount of enemies have specific attributes that’ll make you adapt, with every move dependant on their abilities. There are floating fireballs, boots with blue brains, frog/fish hybrids with large lips, slime balls, satyrs, moles, red and green conjoined peppers and a load more, including powerful monsters who act as bosses throughout. You can even form a team of monsters to face off against others in the Monster arena–just make sure you talk to Morrie.

Dragon Quest VIII: Journey of the Cursed King on 3DS has some other new features and changes I haven’t touched upon yet, such as the quick save; don’t make the same mistake as I did by assuming it did it automatically (three bloody hours I lost to my own stupidity)! You can still visit a nearby town and save your progress in a church, but this quick save feature helps you when your knee deep in exploration. Whenever you’re wandering about the world of Trodain, every enemy can be seen in all their weird glory, so no random battles will start. Although it’s a small change, it really helps when you’re trying to avoid a fight because your health is low, and you have no herbs or MP to heal yourself. When you’re trying to build your characters by grinding, the new speed up feature works wonders. It allows battles to unfold Benny Hill style, and makes the whole process of grinding much easier, and feel like less of a chore.

The same gorgeous 3D art style returns, and the genius of Akira Toriyama (Chrono Trigger and Dragon Ball) shines on the small screen. Visuals are sharper, and the fact you can see all of his unique character creations everywhere on your travels is great. Although the original game came out almost ten years ago, the upgraded visuals bring it up to par with other modern day 3DS titles. To acknowledge this, there’s a swanky new photo mode where you can take photos of your adventure and then share them via StreetPass. The music, albeit repetitive at times, makes your journey feel as grand as it should, with a rousing score by series stalwart Koichi Sugiyama.

I loved coming back to DQVIII; it’s aware of how silly it can be, but it has a wonderful charm to it, and the effort in making each character come to life thanks to the wonderful voice acting is noticeable from the start. It can be punishing at times, and not always clear when it comes to your next objective, but overall you’ll be able to sink plenty of hours into a story filled with magic, wonder and excitement.

Objectives can be unclear
Can feel too punishing at times

Whether you’re returning, or you’ve always wanted to play a Dragon Quest game, this is the perfect place to start.

You may also like
Dragon Quest VIII: Journey of the Cursed King