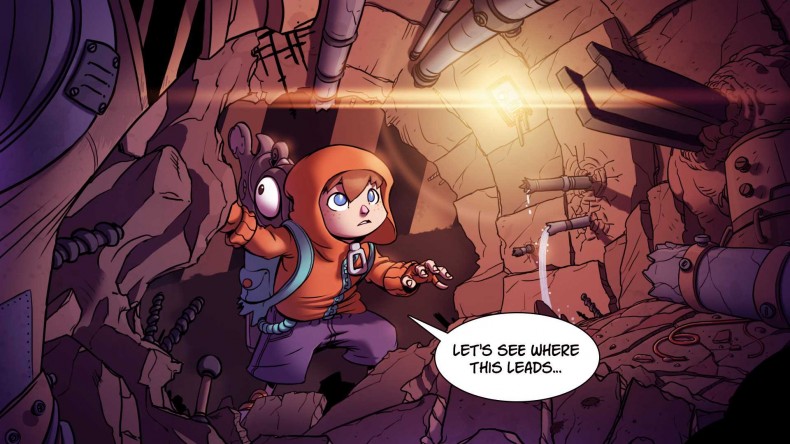 Rise and Shine is a side-scrolling platformer with a primitive edge, comic book art and brutal gameplay. It’s also full of humour and some really cool video game references. Portal and Half Life, Gears of War, Pac Man – even Flappy Bird; there’re loads scattered throughout which show where the game’s influences lie, and also what to expect in its humorous and entertaining campaign. The violence is over the top, the gun is a vital part of play, and as much as you’re shooting the hell out of the villainous space aliens or grunts of Nexgen (see what they did there?), there’re plenty of puzzles for you to use it for as well. With a game that challenges you at a constant pace, it can sometimes feel too much, but there’s always a breakthrough, even when you think your time is up.

Rise is a little dude who’s thrust into a horrendous war between humans and aliens, on his home planet of Gamearth. After a brief encounter with a gargantuan robot dinosaur, you wake up in a mall filled with chaos and destruction. It’s there you meet a Link lookalike who, with his final breath, gives you a gun. But this is no ordinary gun, Shine is a revolver that has special abilities such as a homing system, and a range of different types of bullets. After getting out of there, you embark on a constant mix of firing Shine, manipulating his bullets and thinking about your next task just as much as blowing the shit out of everything. The control system is fairly basic too, which makes the frantic combat a lot more straightforward than other games like it, such as Rive. Rive got too muddled, and combat became almost game breaking due to the sheer difficulty of it. Rise and Shine is tough – really tough – but there is always a light at the end of the tunnel and the hunger to succeed is always there. You can jump and double jump, slide, hide behind certain debris and fire your gun. You use the right stick to aim, and fire with the trigger, but by pressing the left shoulder button you can change the type of enhancement your gun uses. By pressing the right trigger, you can change the type of bullet. You have a health bar, but it only really takes one bullet from an enemy to wipe you out, so making use of the cover system is vital.

Rise and Shine incorporates a lot of puzzle mechanics in its campaign, and between some of the big showdowns with bosses, brutes, or even blood-lusting zombies, these brainteasers are a godsend. Sometimes, you’ll come up against a door that won’t open, but by selecting the homing bullet, you can use it to move through tight gaps and past unsuspecting gun turrets to blow up the generator. It has such a fast pace, and you’re never far away from a gun fight, but it’s a blast, even when I’d spent well over 30 minutes in a boss battle I wanted to continue. The artwork is ridiculously good, too. There’s a rich palette of colour, plenty of variety in each scene, and a real attention to detail. From the beginning of a stage to the end, nothing seems to repeat itself, no two backgrounds are shared – it’s just stunning. The animations of some of the bosses are great too, and there are some great references to old school games and how they would have dealt with a defeated boss, for example.

Rise and Shine is yet another game published by Adult Swim that hits the spot, both in entertainment value and replayability. I had a few issues with the game freezing, to which I had to restart from the beginning of a section. I adored Headlander, and I’m equally in love with Rise and Shine. It’s not the longest of games, but its gorgeous style, great control scheme and constant gaming references offer plenty of reasons to keep playing and come back to. Super Awesome Hyper Dimensional Mega Team have done a fantastic job here, and I’m really glad I got a chance to play it.

It’s full of blood, violence, puzzles, humour, all set in such a beautifully designed world. Definitely one of the most fun platformers of recent years.