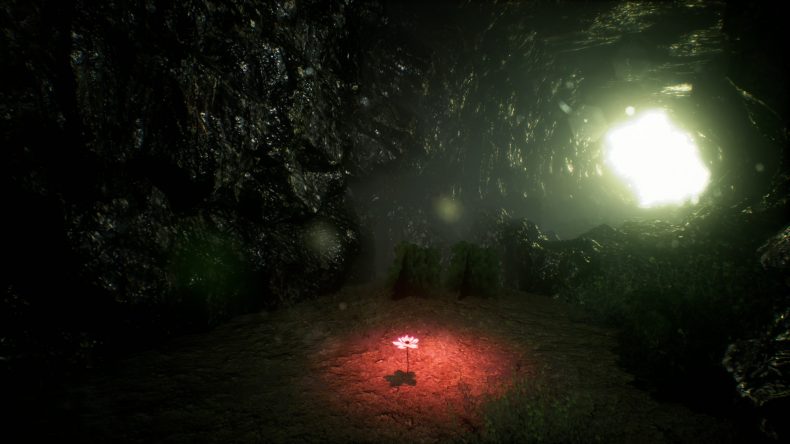 Imagine strolling through a lush forest as shafts of light filter through the leaves of the canopy overhead, illuminating the natural colours and turning them into vibrant beacons of beauty. A stream runs beside you, its soft trickling offering a calming effect as you wander the green land. This is how Reaching For Petals begins, with a showcase of natural beauty, albeit recreated within the Unreal 4 engine.

Described as a ‘poetic adventure’, Reaching For Petals has its roots buried deep within the walking simulator genre. Only this one is much shorter and much more linear than most, but that doesn’t take away from its story. A tale of love and loss, this is a story about Kai and Renee, of a love that grew from childhood. This is told through a series of chapters within the woods, with a narrator giving voice to Kai’s innermost thoughts and emotions through poetic verses. Between each of the game’s four chapters is a brief spell in Kai and Renee’s home, recalling text-based memories based around specific objects found around the house. These snippets offer a limited choice of how each scene might have played out, leading to some quite touching moments. There is minimal interactivity during the hour Reaching For Petals takes you, though you are free to wander for as long as you like within each chapter’s setting. I highly recommend taking your time to appreciate the detail and lighting throughout, as it really is exquisite. The way the setting sun glints off a lake’s surface; how individual leaves fall from the tops of the trees; and the way the shadows grow deeper within the caves of the second chapter. The same cannot be said for the human figures within the game, with their crudely chiseled forms and almost complete lack of detail, but luckily their appearances are fleeting.

Accompanying the lovely visuals is an astonishing score and a generally high level of audio design. The narrator, although mostly your typical English gentleman type, offers some very subtle emotion at times. The sounds of the forest; birdsong and running streams, or the soft breeze swishing its way through long grass – all magnificent. The music is on another level though. The sweeping orchestral tones shift dynamically to suit every moment, every emotion of the story’s arc. Its highs and lows perfectly compliment the words of the narrator, but without audio options available, it can sometimes drown out the speech. Or overwhelm it a little, at least. It is a quite powerful experience, despite some of the unnecessarily complex language that can push it a little close to pretentiousness, and a story that sometimes tries a little too hard. There is no denying it had an effect on me, packing quite an emotional punch, and the sweet love story of Kai and Renee brought a smile to my face on more than one occasion, from their meeting as children to the idealised version of prom. It won’t be for everyone though, as is often the case with these more understated or experimental, linear games.

Regardless of whether you agree with the term walking simulator or not, there’s no way Reaching For Petals can be described as anything else, really. The whole game hinges on you, through the first-person perspective, walking from point A to point B throughout each and every chapter, listening to an English fellow recite poetry. But there’s heart in its story, its beautiful visuals make the journey worth taking, and that musical score is better than almost anything else I’ve heard in gaming this year.

A beautiful mystery, with gorgeous visuals and a sublimely moving soundtrack.