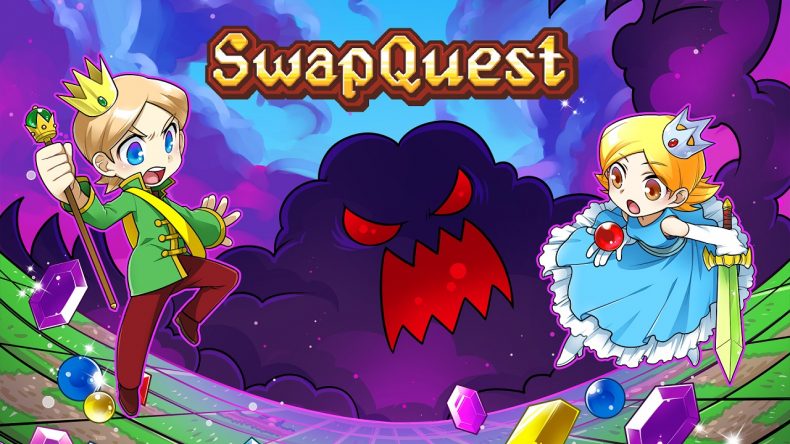 Swap Quest is a cutesy, Zelda inspired RPG puzzler combining the tile swapping gameplay of games like Pipe Mania with some loose character progression and story about saving a Kingdom from a dark and malevolent murky fog.

It is a peculiar little game in that the platform you choose to play it on will illicit a wildly different reaction from you as you play. I’ve played it on Android, where it is currently free to play albeit with some fairly frequent and obnoxious ad pop ups, and on my phone it is a fun little time filler that works very well with the touch controls and is surprisingly in depth. On Xbox One, however, it is an entirely different beast, with the tile swapping mechanic being an exercise in frustration with a controller, and particularly in boss fights, a total hindrance to enjoyment.

You control one character, either the son or daughter of the King, you can then choose from a variety of class types. These are your usual classes in fantasy role-playing games: Warrior, Rogue, Mage etc.. Each class will provide you with different attributes so there is reason enough to play again with a different class once you have finished the game. Your character moves mindlessly across the map while you move tiles around to create a continuous path for her to walk along. You can pause her movement and change direction with a simple click in the direction you wish to travel. There are treasure chests to unlock, as well as enemies in your path that you can choose to avoid, or attack head on for experience. Each mission will also provide you with three quests to complete, for example this might be to finish the mission with full health, to kill a midboss and collect a certain amount of gems. By completing each quest you will be rewarded with additional experience and gems which can be spent on upgrading or purchasing new equipment that will deliver more damage to enemies.

Missions are completed by successfully creating a path for your hero to travel along until they reach the “finish line”. As you move forward, the fog is chasing you so you will need to work reasonably quickly to move the tiles around to create the path you want. As you progress, the speed at which you need to do this increases, and new environmental dangers may appear – for example in an early level a village is on fire and your path is often obstructed, at points there are ponds which you can repeatedly hit to disperse water to quench the fire, or you may well be faced with backtracking to find an alternate path. It was in these middle to later levels where the controller became a hindrance as selecting the tile was via a mouse pointer which I’m sure using a mouse would be straight-forward, using the analogue sticks it is imprecise and frustrating, particularly as you are often engaged in locating the correct tile to swap out to keep your character moving and out of danger while also keeping on top of the fire.

In addition to missions, there are little challenge rooms where you have to complete a specific task, for example collecting a certain amount of gems within the time limit, or avoiding being hit by swarms of bees for a set amount of time. Successfully complete these and you will receive a boost of gems and XP to spend on upgrading your gear and purchasing new items. Boss fights have the potential to be interesting, however, again on controller I found the imprecise nature of the tile swapping to be incredibly wearisome. The Bosses require a certain element of puzzling in order to stun them so that you can hit them. They also move constantly around the map so much of your time is planning your route to the boss so you can land a hit on them whilst simultaneously trying to stun them. The time window to reach the boss varies as well so often you are unable to land a hit on the boss while it is stunned and then have to start over again. It’s frustrating, and particularly with the first boss I felt that there was a significant element of luck with the timing to stun and then create a path to land some hits on him.

Swap Quest is an excellent little mobile game, the campaign is a decent size, and there are a number of different paths you can take through the world so there is plenty of replayability. Furthermore there are a number of classes to fiddle about with as well making each playthrough different. Sadly, on console the game doesn’t quite add up as well. The mobile roots are fairly obvious and playing on controller isn’t the same as utilising the touch controls on a smaller screen. It also doesn’t feel robust enough a title for console and throughout my playthrough I couldn’t escape the feeling that I enjoyed it far more on my phone.

Swapping tiles with the controller is imprecise & frustrating
Is a better mobile game than console game.

Swap Quest is a cutesy, tile swapping RPG and puzzle hybrid with clear mobile roots. It doesn't feel robust enough on console and is better played on mobile.