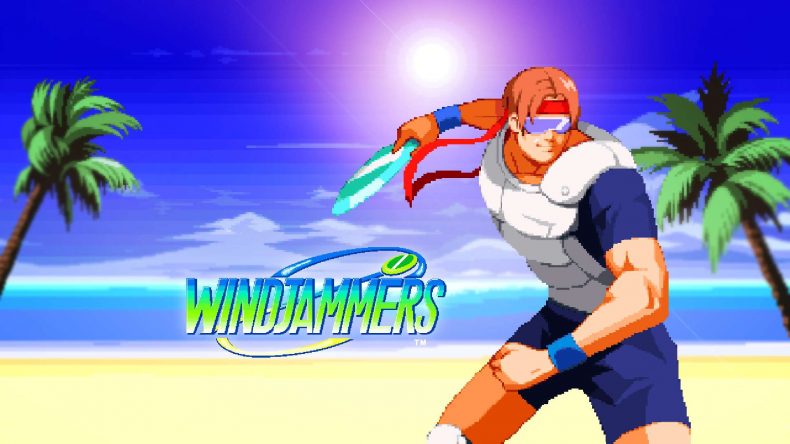 The NEO-GEO was always an unobtainable wonder for me in my childhood. My brother and I owned a SNES, but the ‘arcade perfect’ ports the NEO-GEO played host to always fascinated us, though the sheer cost of play meant owning one would forever be a pipe dream. It’s a bit of a surprise then to see perfect ports of old NEO-GEO titles hitting multiple formats now, and Windjammers feels like something that fits in well now, let alone when it was originally released in 1994.

The game itself is part fighting game, part volleyball, and part frisbee; the aesthetic is like the late 80s never went away, with fonts and a colour scheme lifted from a muscle beach promotional video, it’s just you and someone else, Mano-a-Mano, throwing a frisbee back and forth with the intention of getting past and scoring.

In a world of regular games looking like throwbacks to those of yesteryear Windjammers fits right in, the menus full of bright, garish yellows and pinks and presented in great pixelated fashion, it’s hard not to love it as the great 16bit-esque chiptune plays away in the background. Gameplay is nice and simple, you throw the frisbee back and forth attempting to get it past your opponent, the orange areas net you three points while red gets you five, you can’t move around when you’re holding the disc, but you can bounce it off the walls to try and get it around your opponent. You can also lob the disc high over onrushing opponents, or curve it with a flick of the stick, there’s rarely a time when you can’t catch the disc either, as pressing Cross grants a nifty dash move to the receiver, you just need to ensure you’re pressing the right direction when you go for it, lest you’ll watch the target sail right past you. This simplicity means that matches can progress at a fair lick with the characters dashing all over the place trying to assert their control over the court. It’s fantastic against the AI, it’s great against people online, but it’s truly something special when played with someone in the same room

When this was revealed at 2016’s PlayStation experience I wasn’t really sure what to think, I mean, I wasn’t sure what type of audience this game was supposed to be serving, but thanks to Windjammers the spirit of games like Super Tennis and Smash Court is alive and well. If you were a fan you want this. If you lament the lack of a decent tennis game this generation then you want this. It’s a fantastic time capsule that slips in effortlessly alongside modern games and indies, but, you know what? It’d be a great fit for the Switch.

Possibly too few modes of play

Stylish, simplistic and a whole load of fun, get some mates round and have a tournament, you’ll thank me later.