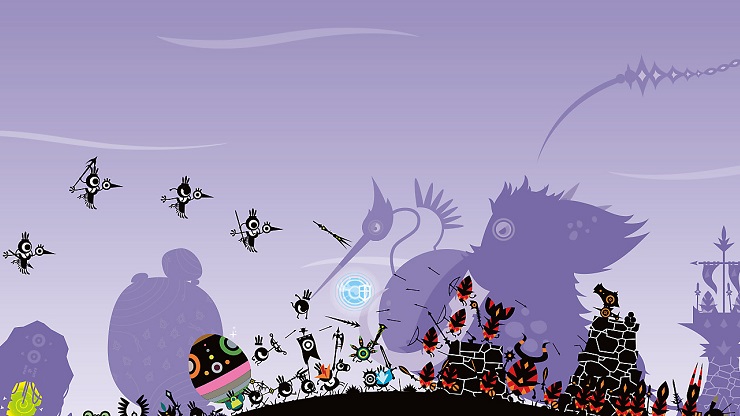 Rhythm games tend to follow a similar pattern of play. Match the button inputs to progress and listen to some catchy songs in the process. Some have an interesting secondary mechanic or concept, but for the majority they’re mainly the same kind of experience. What makes Patapon 2 Remastered so different, is that there is a much bigger objective here. This is a ‘God’ game of sorts, where you build your army and evolve them, collect new equipment, and arrange the most effective formation to head into battle with. It’s a rather niche title, but it’s certainly worth your time.

This is the second Patapon title to be remastered for the PlayStation 4, and whilst the original had a very similar focus, there’s plenty more this time around, including a rather deep progression system and a much longer story. Patapon 2 Remastered has a satisfying gameplay loop. Jump into the levels, then head back to Patapolis to level up and build your army. There’s never a lot of help on offer in terms of how everything works, and it took some time to understand the different types of Patapons I could create and evolve. Yaripons throw spears, Tatepons use melee weapons to get in close, and Yumipons use a bow to fire from afar, but then there’re advanced and Unique Patapons that will become integral to your army. Another thing Patapon 2 introduces is the Hero Patapon. He leads your army into battle and can be customised with a variety of masks to increase stats. The Hero will also be used in the ad-hoc multiplayer game known as the Patagate. At the time of reviewing, there weren’t any other players for me to team with, but Patapon 2 Remastered will fill up your team with computer-controlled allies so you can still play. In the mode, you’ll go back and fight bosses you’ve defeated already. It’s not the best, but with the ability to earn masks to use in the main game it’s worth dipping in and out of.

There’s a great deal of variety when it comes to the levels, and when you get to grips with the different actions it becomes rather addictive. You start off with simple movement by inputting Square, Square, Square, Circle (pata-pata-pata-pon), and as you progress, new commands are unlocked. You’ll end up attacking enemies with one command,blocking enemy attacks with another, as well as retreating when the going gets tough. There’re other commands in Patapon 2 Remastered, too, such as the Ballad of 1999 which removes any afflictions on your army, and the Song of Miracles helps to charge up whatever miracle you have equipped. Connecting with the beat and inputting the commands correctly builds the combo meter, and once it reaches the Fever status, all attacks and defence improves simply by keeping the rhythm. Patapon 2 Remastered requires a lot of concentration to not only keep the rhythm whilst inputting commands, but due to some missions having a lot going on, you’ll need to switch commands a lot, which can lead to the occasional struggle. The biggest problem is there seemed to be a slight lag when inputting controls, so when you think you’re getting it right, a command may not work. You end up adapting to the lag, but it all goes to pot when you’re trying to defend the long range attacks whilst the melee enemies or bosses are getting in close i.e. managing plenty of commands at once.

Patapon 2 Remastered looks pretty during the levels. The colours are sharp, and the designs of both the Patapons and backdrops allow the mayhem of the game to remain clear as you play. As for the music, well, let’s just say I was singing the infectious commands all through the day. It’s a beautiful little game that has come from the PSP to the PS4, and for the most part it holds up very well.

The grinding involved in Patapon 2 Remastered is what makes this game a joy to play. Going back to old levels and gaining items to build up your army becomes satisfying, especially when it allows you to evolve and level up, and equipping a more powerful weapon to take into a trickier level makes the grind completely worth it. It’s a shame there’s never any real explanation as to how you can go back and replay levels, or what certain symbols mean, but as you play you get to grips with every facet of it.

Patapon 2 Remastered blends different genres together to make an addictive RPG and rhythm game that has the right amount of depth to keep you playing. The Patapons are cute and the music that accompanies you into battle will stay in your head for a long time. If it wasn’t for the frustrating input lag and the lack of explaining, Patapon 2 Remastered would be a near perfect remaster.

Input lag is frustrating
Some elements not explained well

Patapon 2 Remastered brings its unique style to the PS4, with plenty of variety, and some wonderful music to boot. It's just a shame that the input lag is a problem.