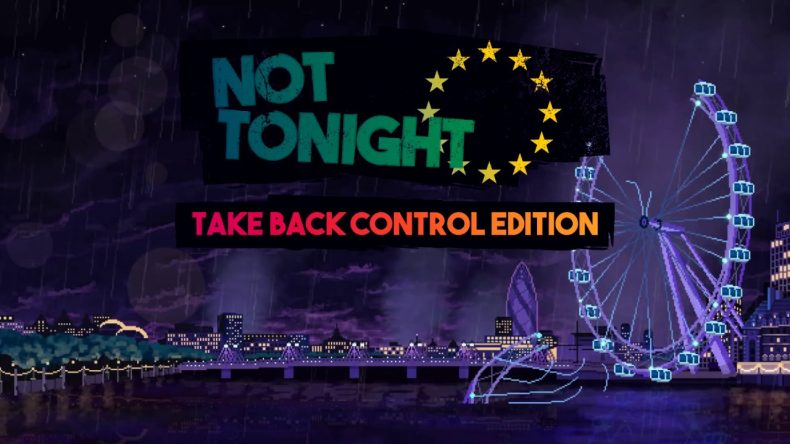 A game with a central theme as divisive as Brexit might initially send a big warning flag to many of you. However, whilst Not Tonight: Take Back Control Edition does set its stall out with a clear agenda and narrative, its satirical tone keeps it from becoming an overbearing political lecture. So don your thick skin, rise above the sometimes maudlin surroundings and you’ll embrace a game that becomes deceptively deep and addictive.

Not Tonight sees you entering a gig economy as a bouncer working the pubs and clubs of South-West England. Your job is to decide who is allowed in and who gets sent home, by following the strict criteria of your employer that day. It begins with basic legal checks such as confirming patrons’ age and the authenticity of their identification, but it doesn’t take long before the narrative and your employers begin to focus more on personal information like nationality or income to justify entry.

There’s a distinct resemblance to Papers, Please, which certainly isn’t a bad thing. Initially, Not Tonight: Take Back Control Edition feels like a less serious take on that 2013 classic. Part of Papers, Please’s success was being acutely aware of the gravity of your decisions on the individuals you were reviewing. Denying someone entry to a local slice of nightlife doesn’t quite have the same gravitas. Not Tonight definitely dabbles in more serious decisions, as you occasionally move to more important jobs such as makeshift border control. And I’ll admit to feeling a little tinge when turning away Europeans who are simply being harshly treated in the post-Brexit dystopia. But even then, it never quite seems to elevate to the types of moral dilemmas Papers, Please had up its sleeve. But if we put the emotions and political affiliations to one side, there’s actually a pretty engaging challenge to be had with Not Tonight. Keeping out ruffians with illegal ID feels rewarding, as does successfully spotting an error whilst keeping the queues of the night moving. It is repetitive, but the new checks that are introduced give your brain and your eyes more to consider. The learning curve is obvious and fun to embrace because you feel yourself improving in your perceptive deduction. In the early game, it seems unthinkable that you’d be able to consistently check for both the age of a patron and whether their ID is real. By the end, you’ll do that, check they are an upstanding citizen, are wearing the right clothing and aren’t smuggling any dangerous goods onto the premises either.

Better performances equal better pay, which is critical to both your survival and you remaining in the country. Your bills need to be paid, and even balancing your hunger and exhaustion become considerations before long. It’s not too overbearing though, as more often than not, more work and therefore moolah sorts out most of your problems. The odd night off merely stops you from collapsing on the spot.

Interwoven into the main gameplay are numerous characters you meet, including your wide range of employers, neighbours, and even the local policeman. The dialogue exchanges are actually quite witty and poignant at times, especially as the story progresses. Sure, it’s not “laugh out loud” humour full of notable wise-cracks, but it’s clever enough to provoke a smile. And you certainly grow to like and dislike the different characters, with their relatively predictable, if relatable back-stories. It provides an added layer of realism and a break from your monotonous new-found vocation. There were a couple of niggles during my playthrough, often due to the RNG when it comes to patrons and their ID. As every situation is random, you never quite know what to expect, and it’s not unheard of to have to refuse entry to a large portion of the crowd due to various technicalities. This would be fine, except your paid bonuses are based on getting people through the door correctly, and sometimes the RNG makes this impossible no matter how astute you are in spotting fakes and forgeries. Also, the pixelated design and dark scenery can sometimes make it hard to distinguish who is wearing banned clothing at times. Failing a level because you didn’t spot a black pixel or so against a brown background is pretty harsh. Thankfully a retry and a roll of the RNG dice would normally resolve any problems.

Not Tonight is much longer than you might expect, racking in at the best part of 8-10 hours if you’re not skipping work very frequently. So if you’re not immediately warmed to the bouncer gig gameplay, it will wear thin pretty fast. However the challenge it mounts throughout and variety will see most through it to the end. The added One Love DLC of the Take Back Control Edition is more of the same but in a less intense setting. Whilst the core gameplay remains unchanged, this new angle sees you doing things a little differently than before and it’s a nice palette cleanser once the main credits have rolled.

I’ve always been a dutiful geek, and so being challenged to spot errors quickly and consistently is music to my nerdy ears. That simple puzzle-solving part of my brain gets such a kick from it. To be honest I’ve never stared at a screen quite so intently as I have with Not Tonight, always kicking myself and cursing when I accidentally miss a ruffian. It does a great job of sucking you into its gameplay with its well-paced difficulty curve. The Brexit backdrop is very noticeable, and the message it’s trying to send out is clear, but if you take it simply as a piece of fiction rather than demonstrable facts or political beliefs, the satire doesn’t become overbearing or exhausting. Instead, Not Tonight becomes addictive and, dare I say it, more fun than nightlife admin has any right to be.

Might be too repetitive for some
RNG could scupper you occasionally

A Brexit game might not sound fun, but don't be put off. Not Tonight delivers a slice of addictive fun with a side helping of humour.