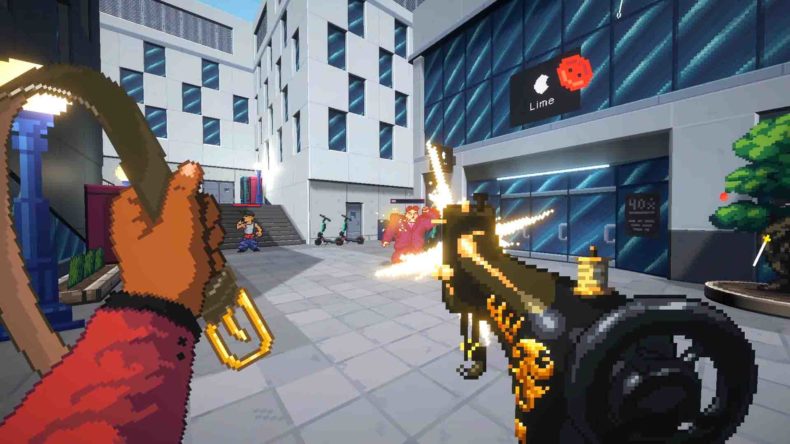 No More Robots has announced that hit PC title, Fashion Police Squad is coming to PlayStation, Xbox, and Nintendo Switch on February 2nd.

While this title is a “first-person shooter”, it’s a bit different. As you can see from the trailer (below), the game has you branding a “belt of justice” and shooting clothes onto people. Yes, that’s right, you basically give people nice outfits and make them look good. Maybe just watch the trailer below, as it’ll give you a better idea. We’ve also included the official blurb from the Steam page, which describes it nicely.

Calling all officers! I’ve got a Fashion Crime in Progress and I’m mobilizing all Fashion Police Squad members. Grab your Belt of Justice and your Tailormade Sewing Machine, we’ve got some Fashion Justice to dispense!

Fashion Police Squad is a humorous Retro FPS where you fight against fashion crime using attire enhancing weaponry. Clean the streets of socks in sandals as Sergeant Des, and experience a single-player story full of fabulous characters, dazzling encounters, and fierce runway shows!

Publisher No More Robots has been responsible for some superb games recently. From Soccer Story to 2020’s Hypnospace Outlaw, or 2021’s Let’s Build a Zoo, the hit-rate has been pretty high for the publisher, full stop. Fashion Police Squad is a game we didn’t quite find time to review when it came to PC last year, but we’ll hopefully rectify that on console, because it’s a well received title on Metacritic, with mostly high 8s, though there’s a few low scores, too.

The title hits PlayStation, Xbox, and Nintendo Switch on February 2nd, and is out now for PC.