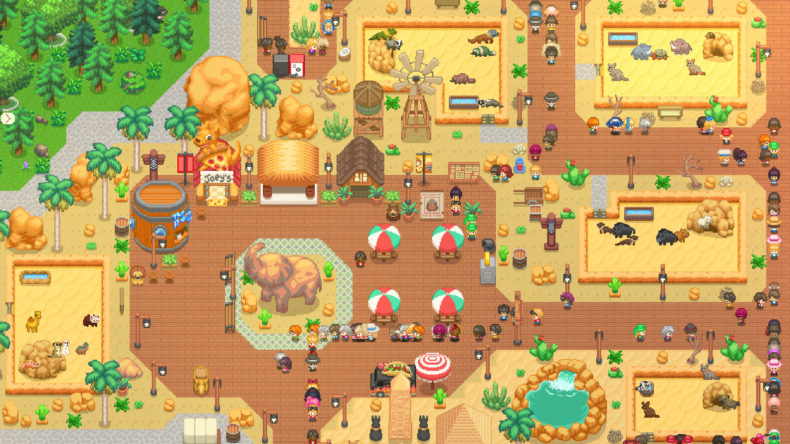 As an animal lover with a ridiculous selection of pets scattered about the house, I enjoy playing games where I can look after a huge selection of critters. Whether it’s raising a team of Pokémon or running my very own Megaquarium, I’m always happy to spend time with a bunch of virtual cuddly friends. When Let’s Build a Zoo was announced, I was prepared to have hours of my life absorbed by my favourite type of tycoon game. What I was prepared for, is how many innovations would be awaiting me.

On the surface Let’s Build a Zoo seems like your average tycoon game. You are in charge of running a successful zoo, with staff to hire, enclosures to build and customers to keep happy. If you enjoy trying to maximise profits while keeping the punters happy, you’ll be in your element here. Your zoo will grow in popularity if people go away impressed with what you have on offer, and if they can’t find a place to get a pretzel or see a porcupine dying of hunger they probably won’t be telling their friends about the fab day out they just had. 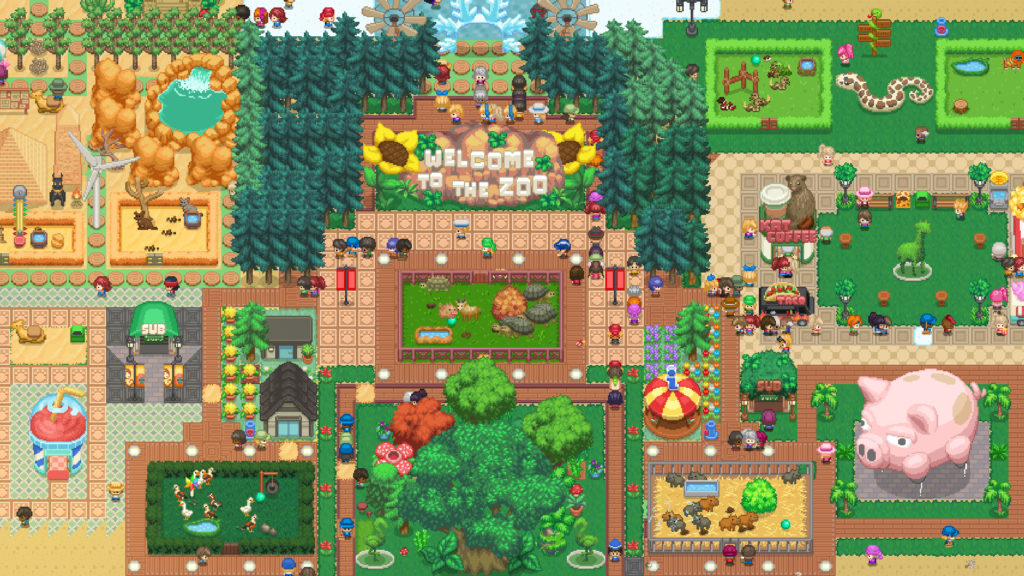 Shops, toilets and keeping the place clean all function in the same way they have for decades in these games, but creating the perfect environment for each of your living attractions takes a little more thought. Each animal has different requirements for the type of enclosure they require (pigs live on grass while camels live on sand) alongside a bunch of basic needs that need filling. Food and water is pretty basic, but companionship and enrichment might involve some tweaking. It’s always very satisfying to put each animal in an enclosure that suits them perfectly, and watching a snake bouncing furiously on a trampoline never gets old.

Once you’ve built a cracking new home for an animal, you’ll need to find one to put in there. This is easier said than done though, because you’ll rarely get access to a new species without trading something from your park in return. Starting with pigs and rabbits, you’ll soon notice offers from other zoos. One of your fairly disappointing bunnies might be worth swapping for a couple of Capybara, but only if you’ve got the exact fluffy-tailed beast that the zoo in China needs. The whole process is a little long winded, and especially in the opening hours you’ll be starved of new critters.

The first big difference between Let’s Build a Zoo and other tycoon games is in the animal breeding. Each species of animal has 10 different variants, and breeding different combinations will bring with it a chance of getting a new one. Before you know it you’ll have white, brown and Canada geese all mingling together, exciting customers and opening up new trade opportunities. 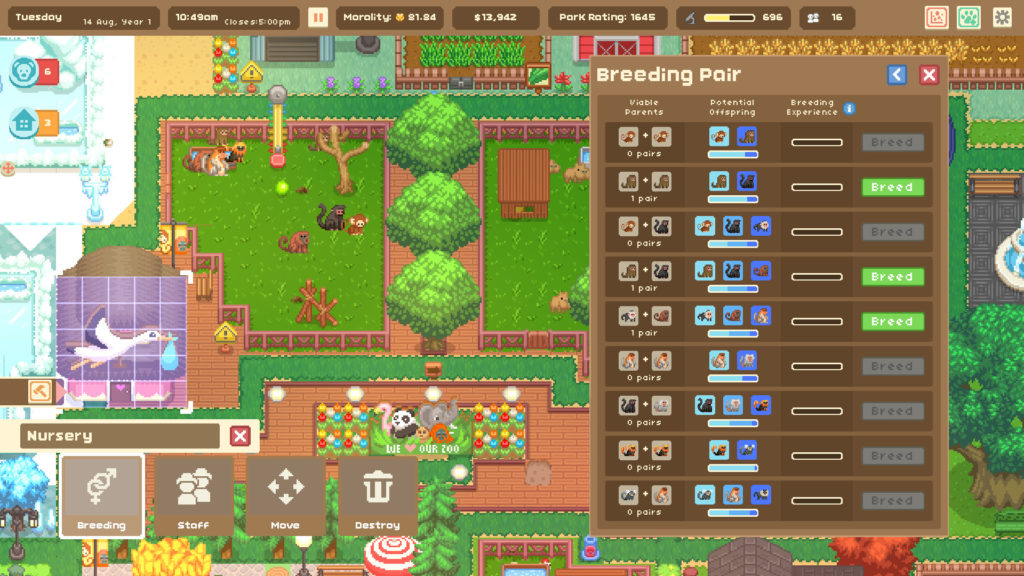 Different colours of scales, fur and feathers is one thing, but if you really want to create an attraction worth traveling to you’ll need to fuse different animals together. Using some magical future technology, you’ll be able to create some spectacular and horrendous monsters to display for all to see. From the first time I witnessed a Goose Snake flapping around with the rattlesnakes, I realised this was the game for me.

As much as I loved splicing animals together, I thought it was such a shame how difficult the game makes it to get started with it. You can only fuse animals together if you’ve bred every single one of their variants, which takes a huge time investment. Doing this for dozens and dozens of animals is such a huge grind, and meant I didn’t get to make nearly enough monstrosities for my liking.

There are a few workarounds for the lengthy splicing process, especially if you don’t mind taking the evil moral path. Let’s Build a Zoo has a robust morality system to dive into, with rewards for being as good or evil as possible. As is so often the case, being a good guy is way less rewarding that being a villain. Getting access to Wind Turbines and recycling is much less exciting than painting a goose to look like a peacock and buying black market animals from dodgy Joseph and his blonde mullet. 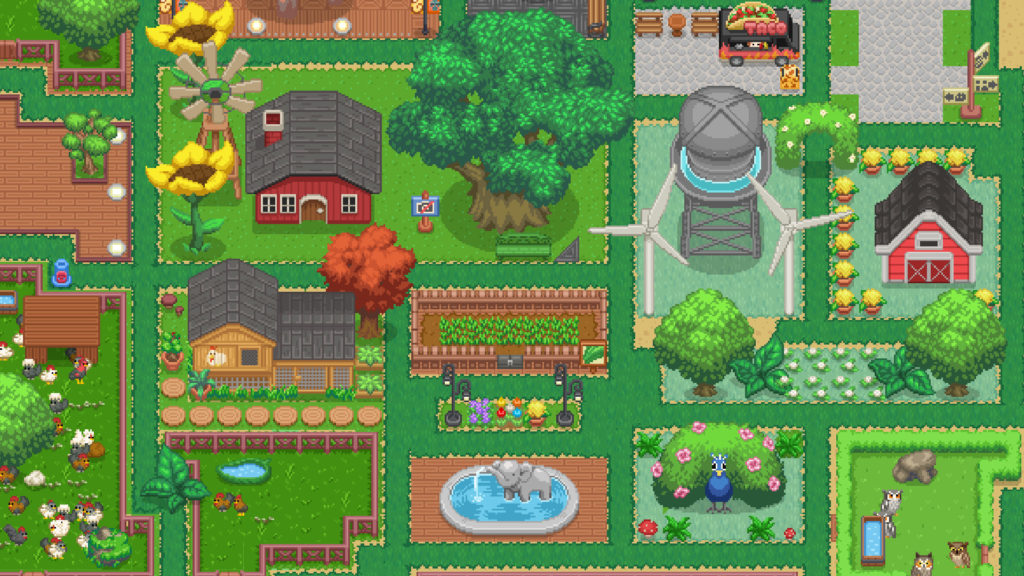 The more Let’s Build a Zoo you play, the deeper systems and upgrades you’ll unlock. There’s a huge grid of new items you can unlock with research points, and as the hours go by you’ll be able to grow crops for the animals, build a subway for getting around the park, and even find various (and often morally dubious) ways to dispose of deceased animals.

There’s so much to love in Let’s Build a Zoo, but it isn’t without its issues. The pacing at different points in the game is simply too slow, with the grindy breeding to get new animals really walling off the great late game content. I think the biggest issue of all though is how lacking in personality the animals are. Each animal is essentially a still sprite that bounces up and down, and although I understand animating eating and behaviour would be a huge task, it just means there’s no incentive to scroll around the park and see what’s going on.

Let’s Build a Zoo is an enjoyable and innovative tycoon game, held back a little by some pacing issues. Between moral choices and splicing species together, the game really brings a ton of great ideas to an already compelling gameplay loop. If you can get through the early hours with limited animals, you’ll find hours of fun as you build the ultimate wildlife attraction.

With animal fusion and a fantastic morality system, Let’s Build a Zoo brings some great new ideas to the tycoon genre.

You may also like
Let's Build a ZooNo more RobotsPC

To The Rescue! review