To The Rescue! review 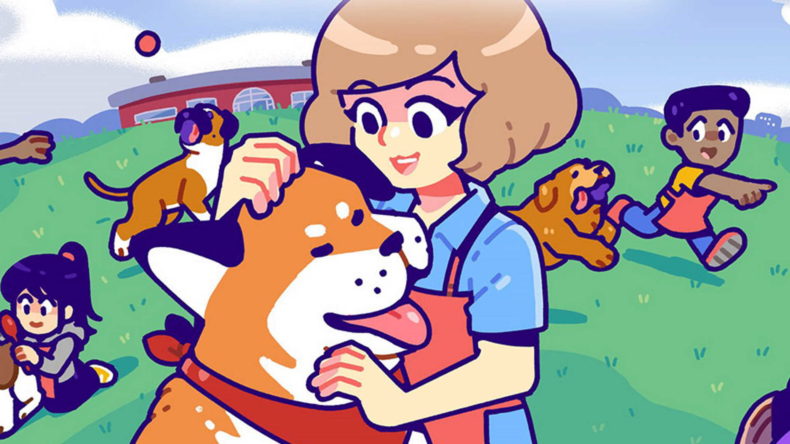 Although dogs are constantly touted as man’s best friend, there’s no denying that humans can treat their canine companions pretty badly. Rescue centres around the country end up with hundreds of pups every year that can no longer be cared for, and unfortunately this cycle is very much a part of everyday life in countries all over the world. I try to do my bit to help all the adorable doggos who deserve better, be that by adopting them myself or helping out at rescues when the situation allows. There isn’t much more rewarding than helping out pups in need, and now you can too in To The Rescue!

After finding a stray dog wandering around your neighbourhood, your character calls their buddy who works in a local rescue centre to see if they can take the little fella in. Unfortunately the shelter is overpopulated without enough staff to care for the dozens of woofers in their care. As any dog lover would you jump at the chance to help out, and before long the mayor has heard about your exploits and invites you to open up a rescue centre of your own. 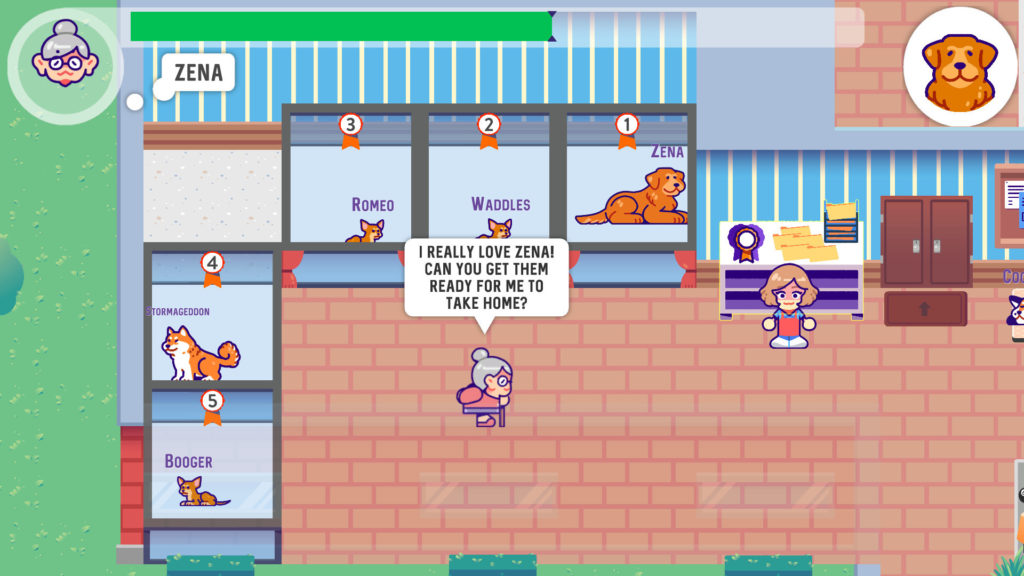 Running your own rescue isn’t just playing with dogs all day, which you’ll soon learn as the kennels start to pile up with brown piles. Each dog you look after needs food, water and cleaning as the bare minimum, but ideally you’ll find time to exercise them in the field and play a few games with them too. Just like in real life, each pup is unique and has its own requirements to keep them happy. Give a dog appropriate food and it’ll make less turds for you to clean up, and exercise and play makes a dog more likely to get adopted.

The end goal for every dog that goes through your doors is to get them adopted. Every day you’ll have a handful of people come to the shelter looking for a new pet, and it’s your job to show them the dog of their dreams. Each potential new owner will tell you what they’re looking for (maybe they want a retriever, or a dog that gets on with cats) and then you’ll need to get five dogs out of their pens to show them. If you manage to fill up their impress meter with dogs that suit their needs and that are well exercised, you’ll be able to send them home happy with a new lifelong pal.

The more dogs you can rehome the more money and reputation you’ll get, which means you can expand your shelter. To start with this just means you can build more kennels so you can house more dogs in need, but eventually you’ll gain access to outdoor spaces, break rooms and even kennels with runs so you don’t need to spend so long exercising the pups. The build mode is easy to use, and has new kennels and rooms you’ll want to unlock as soon as possible. 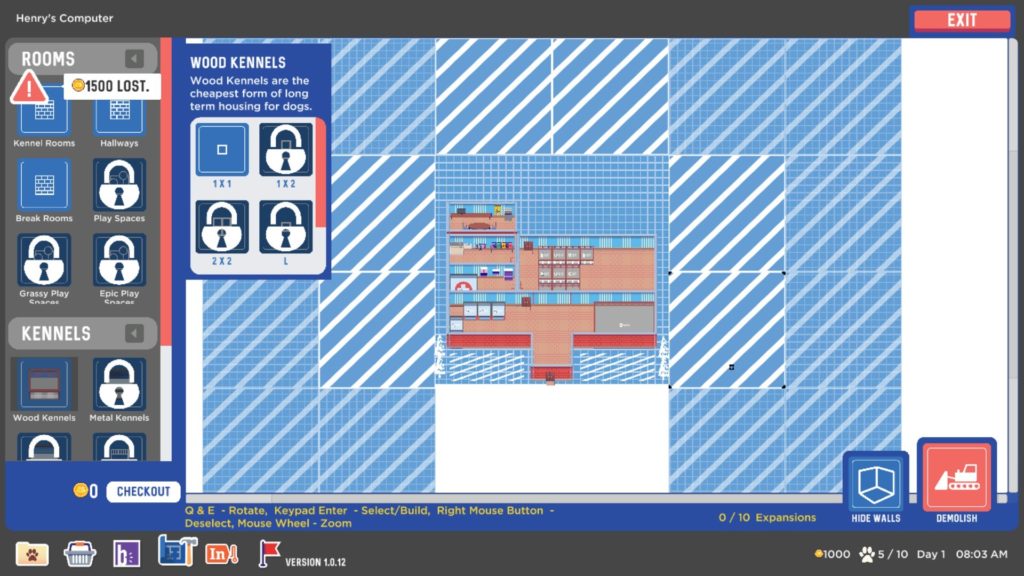 Expanding to allow for more dogs is something you’ll want to prioritise, because if you don’t have room for all the incoming dogs you’ll need to find somewhere that does. If this doesn’t work there’s only one option, which isn’t worth thinking about for too long. If you’d rather not deal with this pressure you can turn off euthanasia in the options menu, which I’d probably recommend to most people.

On a more light-hearted note, the mini games you get to play with the dogs are both fun and adorable. Playing tug or fetch with a dog that’s bursting with energy is always a good idea when you have the time, and even the timing based washing mini game is kind of entertaining.

One of the main issues I had with To The Rescue involved physically moving the dogs around. To move a dog into the paddock or for a bath, you need to get them on a lead. You can move two dogs at once, but the whole process is a little fiddly and on more than one occasion I accidentally let a dog run free around my facility and outside into the world. 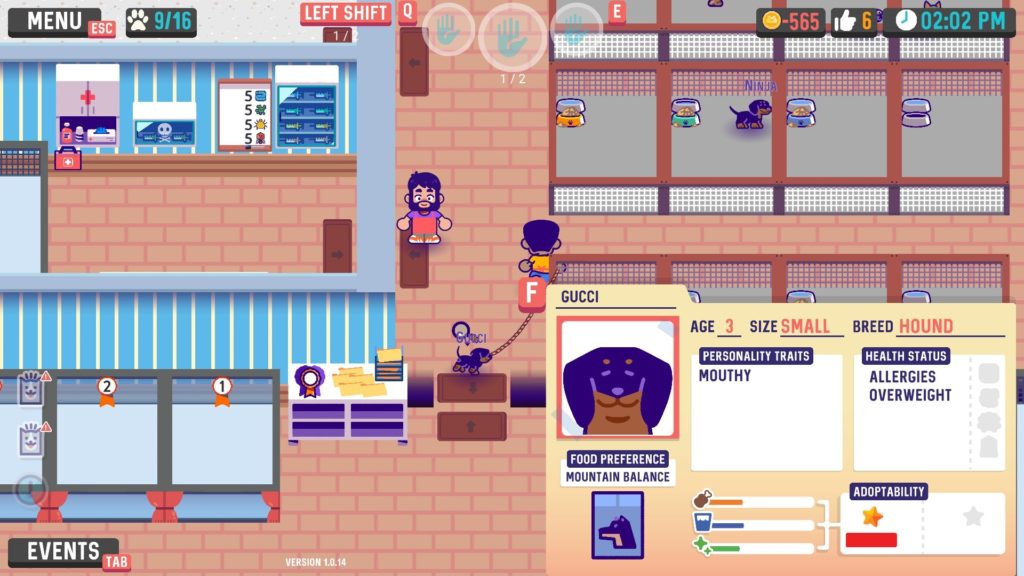 The further into the game you get, the more systems start to unlock. There’s skill trees, workers to help you with your tasks and illnesses and medicine you’ll need to think about. To The Rescue shifts from adorable antics to cancer and euthanasia pretty quickly, which honestly feels pretty in keeping with the ups and downs of working with animals.

There comes a point where progressing doesn’t really bring with it much new. Once you’ve unlocked the exciting early game content everything starts to peter out, and it’s just a bit disappointing. There’s nothing to really aim for, because you’ve already got everything you need to look after and rehome all the dogs that come your way.

To The Rescue is a delightful concept for a management style game, packed full of more cuddly pups than you could ever want. The highs of saving dogs (which due to some profits going to a charity that tries to prevent unwanted dogs getting euthanised, you are actively doing by purchasing) and playing tug are great, and the lows of health issues and euthanasia are awful in all the right ways. It’s just a shame that the more you play the less compelling it gets, but those opening hours are truly entertaining especially for dog lovers.

To The Rescue! is an adorable and heartfelt management game, that unfortunately loses its way after the first few hours.