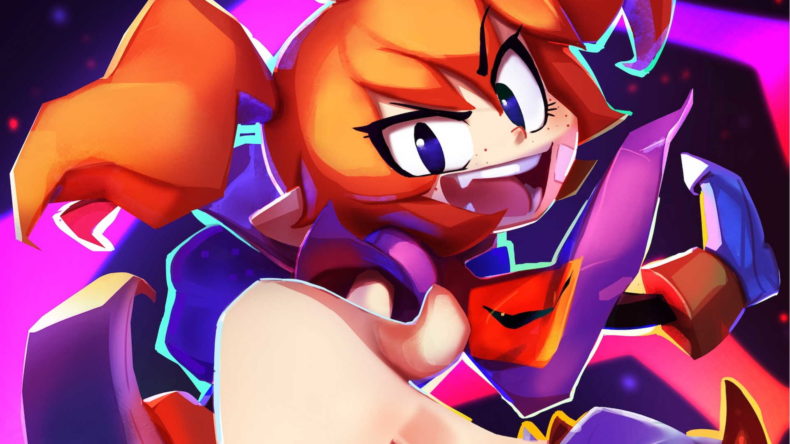 Although we don’t often get a lot of them, 2021 has been a great year for 3D platformers. Whether you wanted the comfort of a Mario remake or the excitement of a brand new Psychonauts, this year has had something for every fan of jumping and collecting. A late addition to this selection comes in the form of Demon Turf, which separates itself from the pack with completely 2D characters.

Beebz is sick of her life in the Demon World. Gangs battle for supremacy in themed worlds, all while the Demon Lord himself watches over the whole ordeal. Our hero decides that enough is enough, and with the help of a few friends begins going from turf to turf overthrowing each gang boss in an attempt to take control of the entire Demon World. It’s a simple story, but plucky Beebz is entertaining enough to carry the narrative. 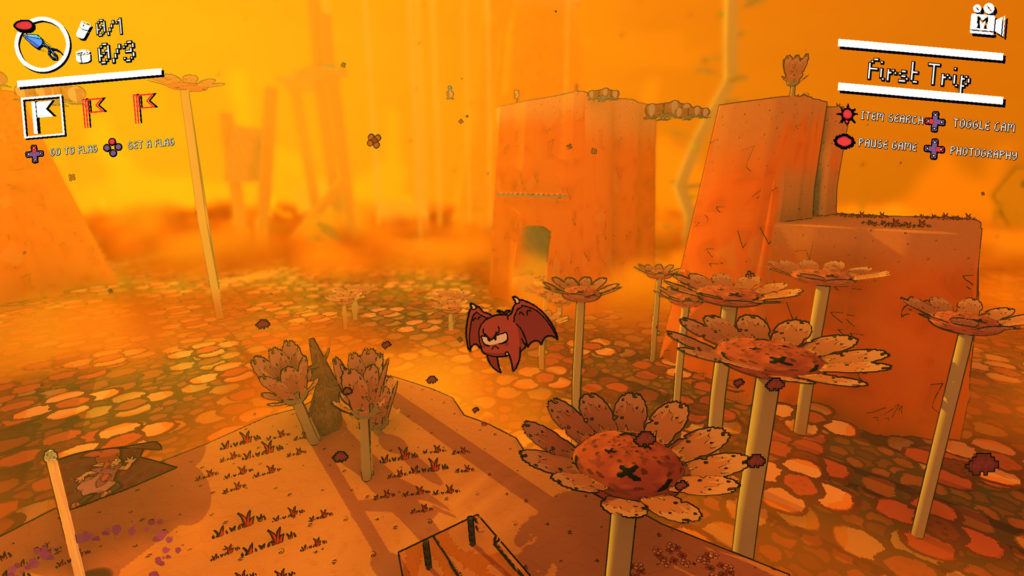 Overthrowing an evil overlord doesn’t come easy, and requires you to go from themed world to themed world collecting enough batteries to unlock a boss fight to take the turf. It’s a pretty standard loop, with each world broken up into smaller stages with batteries at the finish line. Some stages are a straight up obstacle course, whereas others have doors that will only open by beating up enemies or finding keys. It’s a nice variety and no single level ever outstays its welcome.

One interesting element to each stage of Demon Turf is how the checkpoints work. There are no fixed checkpoints in any given stage, and instead you start each level with three checkpoint flags you can place at your own leisure. Although it’s an interesting idea, I generally found it more annoying than anything else. Some stages I’d save my flags for longer than was necessary and end up with some left over, others I’d use my flags far too soon because the level was way longer than expected. Either way it feels bad.

A platform game is only as good as it controls, and Demon Turf does not disappoint in this department. For the most part Beebz has almost the exact moveset as Mario, with a triple jump, wall jumping and even the side somersault. I was pleasantly surprised at how familiar controlling Beebz felt, and I definitely wouldn’t be against more 3d Mario inspired movesets in other platformers. Outside of her standard moveset, Beebs also has the ability to double jump and hover for those extra precise jumps. There’s a brief tutorial to get you used to all of this, and by the time it was over I was ready to face all manner of demonic parkour challenges. 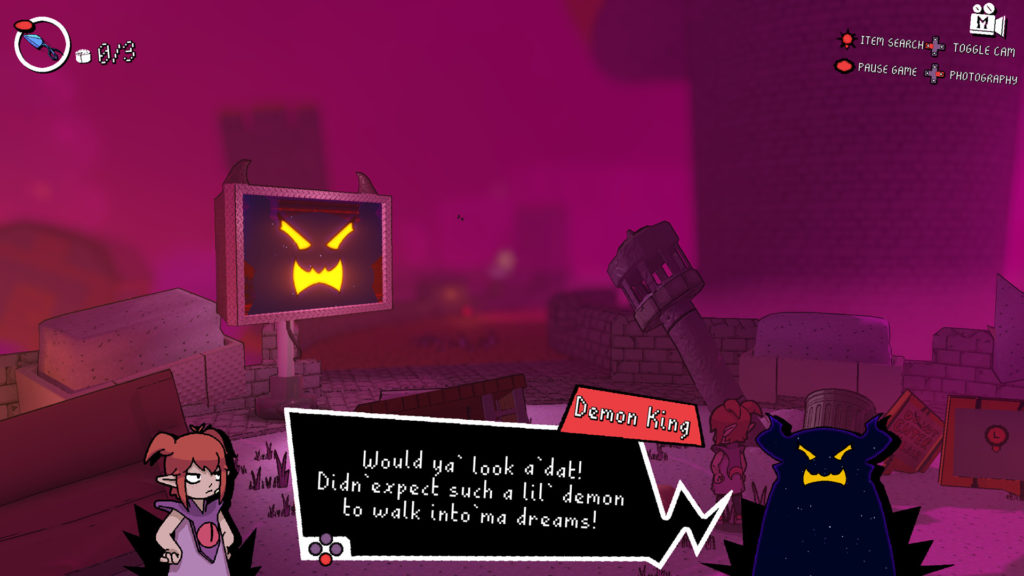 Whereas Beebz’ jumping moveset is pretty straightforward, fighting enemies is anything but. Beebz only has one real offensive move in her arsenal, and that’s the ability to send out a huge palm to push opponents back. Charging the force push will power it up even more, which is important if you want to survive against an arena full of bats and crabs. Pushing won’t actually hurt enemies, so when you’re confronted with baddies you’ll need to find somewhere dangerous to push them. Whether it’s spikes or a ledge you’d best get to shoving.

Each world finishes with an epic boss fight, with plenty of forms to make it through before you take charge of their turf. Before each one of these lengthy battles you’ll get access to a new special ability, which will generally play a big part in the fight. Whether it’s a grappling hook to propel Beebs out of trouble or the ability to transform into a tyre and race about at top speed, these moves are all really fun to use in or out of the boss encounters.

It wouldn’t be a 3D platformer without collectibles, and they are present in Demon Turf in the form of cakes. Each stage has three cakes to find, which can be used to unlock incredibly useful mods in the overworld. Perhaps the best part of these hidden cakes is the ability to locate them. With one click of an analogue stick you’ll summon an arrow that points directly in the direction of the nearest cake. I absolutely loved this, and was able to grab almost every single one without spending hours checking behind every tree. 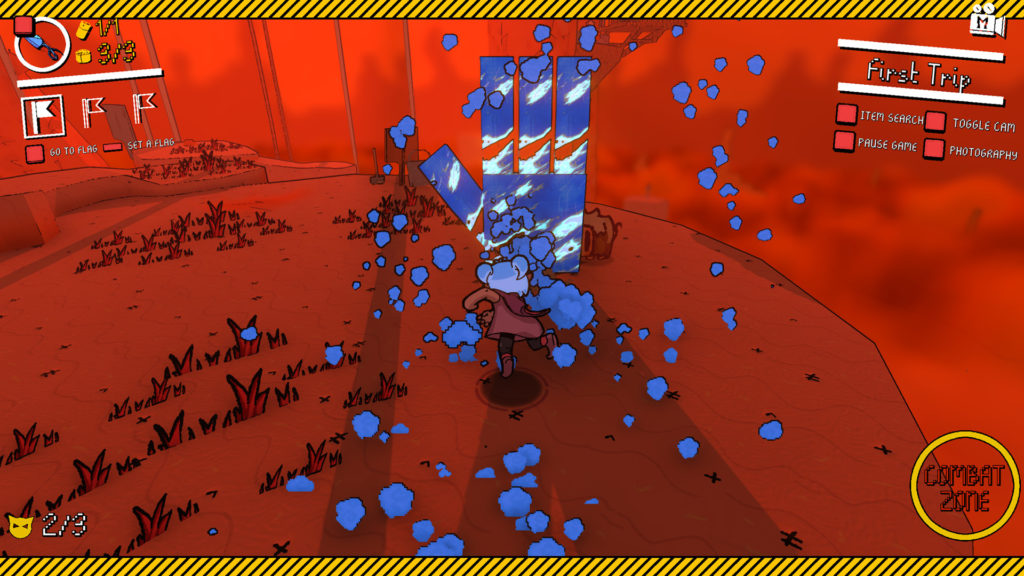 Outside of the main stages you’ll find plenty to do in the overworld. There’s a shop to recolour Beebz, the mod shop, and a plethora of mini games with extra cakes and lollipops up for grabs. Playing football with your push ability or fighting in the arena is a nice distraction from the main game, and developers Fabraz did not hold back on the amount of bonus content.

It’s definitely worth mentioning how well the art style of Demon Turf works, especially the 2D character models in the 3D environments. The characters (Beebz especially) are just so well animated, and getting to see such beautiful illustrations in a 3D platformer is very novel.

Demon Turf is another great 3D platform game in a year with plenty for fans to enjoy. The mixture of 2dD and 3D art is very unique, and the variety in the platforming and combat is impressive. Some systems like placing your own checkpoints don’t quite land, but if you haven’t done enough jumping yet this year then Beebz is ready for your help.