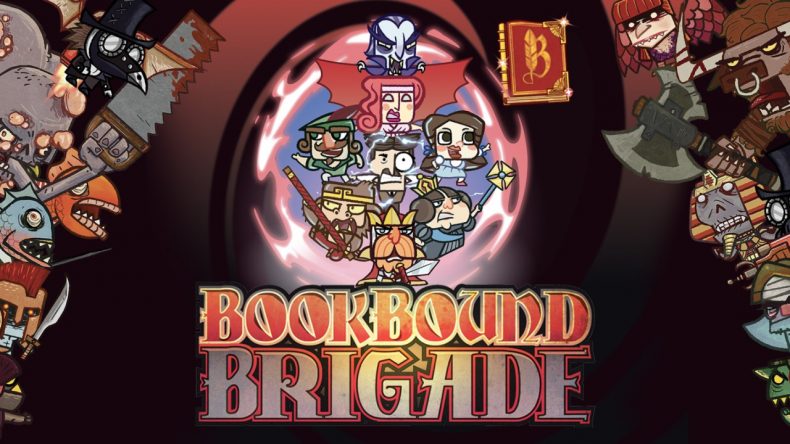 I always wish I had more time for reading. I fit in an audiobook or two as I tidy the house, but something about curling up with a good book is just magical. The legendary characters throughout literature may often find themselves the subject of a video game, but it’s not often a game is about the books themselves. Enter Bookbound Brigade, a Metroidvania style game where the fate of all books is on the line.

There is no single protagonist in Bookbound Brigade, as you play as a literal stack of literary legends. From Count Dracula to Queen Victoria, these fictional and historical characters join together on a quest to restore the Book of Books. Along the way you’ll meet a veritable smorgasbord of well known characters, Long John Silver, Professor Moriarty, and Don Quixote are but a fraction of the side characters you’ll help in your quest. The damage to the Book of Books means that all the literary characters have entirely changed their personalities. King Arthur is old and confused, whereas Robin Hood just wants to hoard gold. This leads to some very entertaining exchanges, my personal favourite being when your party mercilessly makes fire puns when talking to Joan of Arc. Guiding your team around the literary worlds is easy, as they all move in one large mass. To get around specific obstacles you are soon taught how to change the formation of the 8 heroes. You can make the group form one flat line for narrow corridors, stack them into one tall column to reach switches, and even get everyone to link together to form a wheel. When this is done well, juggling forms to overcome the hurdles is a neat mechanic. Unfortunately it is often a case of changing into a form that fits a corridor, and then waiting between the many precise traps to turn on and off. The forms aren’t just useful for platforming though, as each one has its advantages in terms of combat ability.

Combat, especially before you unlock certain abilities, is where Bookbound Brigade falls apart the most. Moving your team to each enemy and mashing the attack button as each character attacks never feels very impactful, and I beat the majority of forced combat encounters by hiding inside the enemy where they couldn’t damage the group. You fairly quickly learn to launch smaller enemies into bigger ones to stun them, but it takes so long to juggle them that it’s often interrupted by other foes. Eventually, as you progress further into the story, you learn some extra dash and stun attacks that make the locked room combat arenas more palatable.

The important upgrades you need to progress through the game are given to you by side characters, but you can also spend hard earned memory on stat bonuses for your heroes too. Health, energy and critical hit rates can all be boosted, as part of each member of the team’s skill tree. They aren’t the most exciting upgrades, but prove crucial on your journey to find the Book of Books. Memory can be obtained in a number of ways: breaking boxes, finding chests and completing fetch quests. Each character you meet is sent to The Library overworld, where they await your arrival to ask for a random item connected to their story. Finding Joan of Arc’s armour or Lancelot’s Lance is as easy as stumbling across it in a chest. It’s not particularly inspired, but it nets you some precious memory.

Exploration of the huge areas is one of the most frustrating aspects of Bookbound Brigade (especially The Library). The map is nowhere near detailed enough to help you find your destination, and all of the environments look too similar to memorise even the most well-trodden of paths.

Despite all my grievances with Bookbound Brigade, I did enjoy a lot of my time with it. As you get more upgrades, both the combat and platforming do significantly improve. It’s not without its navigation issues, but the formation shifting premise is unique and compelling. If you’re itching for a new Metroidvania, and are a bit of a bookworm, you could do much worse than Bookbound Brigade.

Hard to navigate the world
Combat is pretty lackluster, especially early on
Some of the platforming sections are really precise in very boring ways

An enjoyable Metroidvania with some significant issues. It's not easy to navigate and the combat is subpar, but the formation shifting and late game upgrades make it easier to keep turning the pages