Bloodstained: Ritual of the Night review 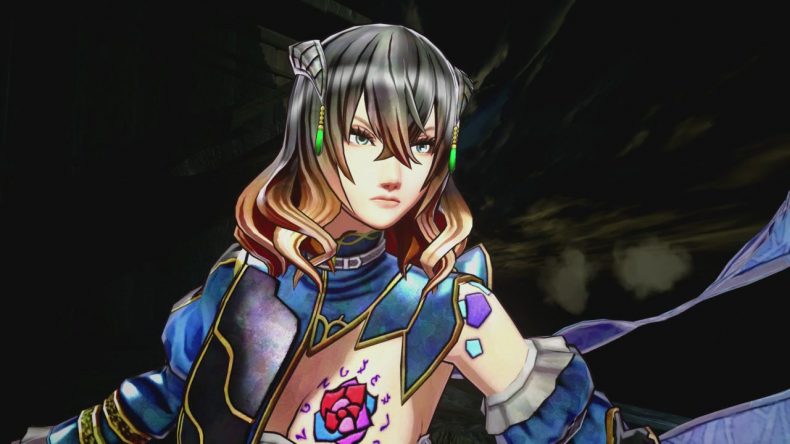 Bloodstained: Ritual of the Night is a sort of sequel-slash-reboot of Curse of the Moon, a Kickstarter campaign that attempted (mostly successfully) to create a worthy successor to the original Castlevania titles. Ritual of the Night re-introduces many of the characters from Curse after a bit of a time jump, but reduces the number of playable characters from three down to just one (initially, at least): the inimitable Miriam, a young woman with a ton of special powers and not a single pair of trousers, who is pitted against her evil (or at the very least nefarious) brother who is now, well, a bit blood-sucky.

The tone and aesthetic is very, very Castlevania-esque (and I mean the old, really good Castlevanias before Robert Carlisle got involved). In fact there’s a very “old-school” vibe to most aspects of Bloodstained, but it’s that cool kind of old school that’s gone so far out the back entrance of old that it’s come all the way round to new again. Because despite having so many nods to a decades-old series and despite being so deliberately nostalgic, Ritual of the Night feels like something very fresh. Playing as Miriam you’ll explore an impossibly huge castle and it’s various basements, lofts, gardens and portrait storage wings, slaying a multitude of imaginative demonic fiends from huge winged monstrosities to giant horned kitty-cats that claw their way through dimensional rifts and set you on fire. Some enemies will group up, some can fly, others still can launch projectiles or inflict curses that lock off half your health for a worryingly long time. The enemy design is vast and diverse, and though they spawn in set places and respawn whenever you leave the “room”, they require a juggling act of tactics and abilities that ensures you’ll rarely get bored even when backtracking. And you’ll backtrack a lot.

As close to a pure Castlevania as possible, Ritual of the Night will see you zipping back and forth through the macabre midnight mansion mixing magic and martial mastery to murder monsters and make Miriam massively mighty, accomplished by the steady acquisition of a variety of skills and abilities such as a giant hand that can move huge objects for you, and Miriam’s innate magical ability to manipulate certain locks. As you progress you’ll develop your stats and equipment, allowing for deeper exploration of areas that were previously impassable. Be aware though: this is no roguelite adventure, and death will return you to the last save point minus any weapons, items, skills or less vela you acquired since you last saved. Sometimes this can mean a single misstep could cost you 20 minutes or more. Save often, and tread carefully. All this would probably be enough, but there are also various additional elements that if applied clumsily could have felt tacked on, but in fact fit the overall picture perfectly. Preparing meals, for example, will allow you to unlock temporary buffs (the first time you eat one you’ll get a permanent stat-boost, mind you), while you’ll loot chests and enemies for armour, trinkets, scarves and weaponry that will impart bonuses and alter Miriam’s appearance (you can even change all her colours and hair style by visiting a demonic barber somewhere in the castle). You can break down, sell, or craft most things in the game, and the respawning enemies mean you can farm certain drops if you’re after something in particular.

Ultimately though, Bloodstained lives and dies by how it plays and, for the most part, it’s exceptional. I insert that caveat because there are noticeable, sometimes massive frame rate drops in certain areas that cause it to plummet from 60fps on the Xbox One X to (I’m guessing without a way to be sure) somewhere sub-20. It gets shockingly bad at times, but thankfully it’s not common. I also took a long time to get used to the back hop instead of a simple evasion roll, but that’s really on me. Miriam moves smoothly, even though it would have been nice to see more animation diversity across the huge array of weapons you can find and level up. Between flintlock pistols, broadsword, axes, daggers, whips, rapiers, morningstars, blunderbuss, claymores and a selection of very lethal boots there’s a weapon to suit any situation. These are combined with Shards of various colours that unlock latent abilities in Miriam. You can use them to summon enemies to fight for you, whip the screen with a giant tentacle, summon a shield of ghostly portraits, spew fire or water, assign yourself a familiar to help you in battle or launch arrows at targets, and that’s really only listing a small portion of what’s available. Add to this Shards which also increase your stats and you’ll start to form a picture of a game that might seem simple but which hides surprising depth and a hundred reasons to revisit it when you’re done.

Bloodstained: Ritual of the Night is an incredibly well-made adventure, and a heartfelt ode to games long past. More than that though, it feels like a potential gateway to a new era of Castlevania games that could cherry pick elements from half a dozen other genres and present themselves with a modern sheen to appeal to a broad spectrum of ages and skill levels. While it at times struggles to keep up with itself and there are elements of frustration here and there, the overall package is immensely playable and lovingly made. Tremendous.

Bloodstained: Ritual of the Night is an incredibly well-made adventure, and a heartfelt ode to games past.