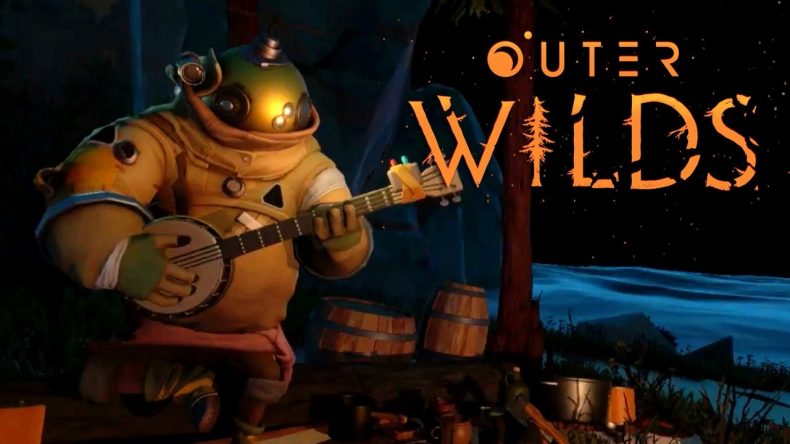 When you say “Roguelike” to me, I immediately envision some kind of perma-death hell characterised by an unhealthy desire to collect everything and punctuated by tiny, incremental advancements that will either see me to whatever “end” the game deigns to offer, or throwing the controller on a bonfire and taking up whiskey as a morning hobby. I either click with them (Dead Cells) or I don’t (fucking Spelunky).

But what I don’t ever envision is an experience that’s at once intriguing, compelling and idling at the same time. Outer Wilds was, for me, a bit of a hard sell. I’m not much of a fan of making my own fun in games; I like at least a bit of real structure, at least some vague reasoning behind “go here and kill all these things”. But in fact, Outer Wilds contains no direct violence of any sort. But what surprised me more was how little Outer Wilds needs such an element. It manages to find an almost perfect balance between walking simulator and grand exploration that genuinely surprised me. Its a relatively small game, in the scheme of things, but it feels vast.

You play a member of an alien race, an astronaut about to blast off into outer space on a fact-finding mission. The first thing you have to do is go up to the observatory and collect some launch codes for your rocket ship, which is located at the top of your village and is a great way to show off how beautiful some of the environments are. In the observatory there’s a kind of museum display where you can learn some history, and a creepy statue that seemed to read my character’s mind on the way out. Weird.

I sauntered into this first-person adventure without a clue what to expect, but thought I’d figured it out within a few minutes. It’s a scavenger game, I thought; we’ll be stranded somewhere and we’ll have to break rocks with our fists and build shelters and – oh look, I wasn’t paying attention and I’ve fallen off this cliff. Hang on a minute. This is all very familiar. See, my first, rather ignominious death, caused by a combination of me being a clumsy twat and me being sort of arrogantly disinterested, saw my little astronaut dude waking once again by a campfire, staring up at the stars and watching a tiny spaceship explode in the distance. I realised I’d seen this before, but when my little buddy told me to get the launch codes again, I already had them. So I’m in a time loop, I thought. Now I’m interested.

Even more bizarre was what happened 22 minutes later. Having climbed into my rocket and done an incredibly ragged job of piloting to nearest planetoid, I was casually exploring some ruins while a maelstrom periodically messed with the local gravity, when the sun, quite unexpectedly, went supernova, wiping out the galaxy.

Once again, I found myself at the campfire, watching the explosion above me. And 22 minutes later, it happened again. That’s your core loop in Outer Wilds, 22 minutes of exploration and fact-finding as you try to piece together what will cause the sun to explode and prevent it. As a mechanic it’s genius, and despite their being no enemies to fight, sudden death can and will strike when you’re not expecting it. Coupled with the ever-present ticking of an imaginary doomsday clock, it adds an element of tension and urgency to everything. You’ll retain everything you learn and every puzzle you crack will remain cracked. The various planets, while presenting fairly contained environments, are visually diverse and the space travel element makes you feel suitably tiny despite never coming close to something like No Man’s Sky or Elite: Dangerous.

I’ll admit that Outer Wilds isn’t my usual speed, and so after prolonged periods I did need a break and some more traditional action, but that’s on me. If you’re prepared to take Outer Wilds for precisely what it is and let it take you in, you’ll find a lot to like. I would have preferred something more complex in terms of management – there’s very little to actually do besides read, solve puzzles and occasionally avoid some form of environmental death, and a little more agency in terms of fuelling or repairing the rocket, for instance, would have been welcome.

But again, that’s my issue. Outer Wilds is good-looking and quite unique in its subgenre, and there’s a compelling, intriguing mystery to solve that will keep you guessing as you progress across the galaxy. It’s not the most exciting or involving game I’ve played in recent months, but it more than makes up for that with charm and originality.

Outer Wilds is good-looking and quite unique in its subgenre, and there's a compelling, intriguing mystery to solve that will keep you guessing as you progress across the galaxy