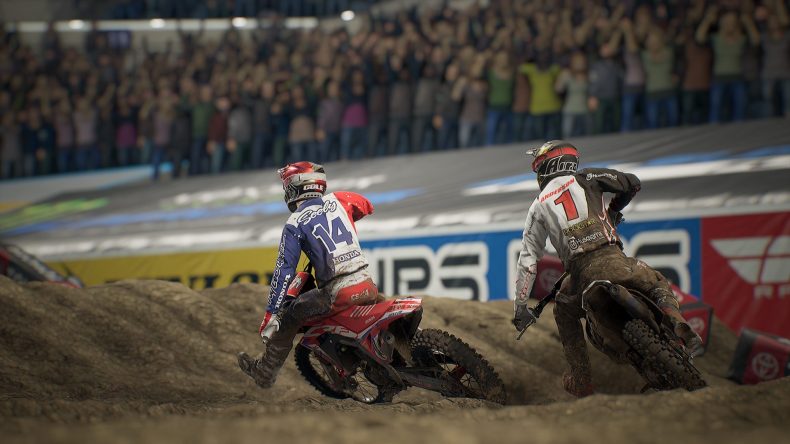 I’m not going to pretend that Monster Energy Supercross 3 is the best thing since sliced bread, but it’s certainly a fun take on the sport. The official game of the Monster Energy AMA Supercross series, this latest game is Milestone’s third attempt at creating a motorcycle simulation worthy of its inspiration. It might not nail it entirely, but it’s still an exciting racer that finally feels good to play.

One thing I do appreciate about this is that when you start the game for the first time, instead of forcing tutorials upon you, it actually asks if you want to look at them or not. This is great for veterans of the series, or people who know enough about the sport and its bikes that they don’t need to be told how to suck eggs. Truth be told, the tutorials aren’t great anyway. The gameplay tutorial simply teaches you about using the clutch to good effect at the start of a race, but otherwise it leaves you to figure it out on your own, which you can easily do by jumping straight into a race or the career mode anyway. The rest of the tutorials are videos (strangely silent ones, at that) which run through how tournaments and events work throughout the career mode. They feel completely unnecessary. That said, because the tutorials are always optional, the chances are you’ll probably never bother with them. When you get into the main menu, you’ll see the breadth of content on offer in Monster Energy Supercross 3 and it’s quite impressive. There are the usual single races, multiplayer, career mode and so on, not to mention the return of the track creation tool for you to build and share your own courses online. The Compound returns too, featuring a completely open playground in which you can practice and hone your skills, or even just explore when you just fancy a quick, relaxing ride. There’s an awful lot available.

You can also spend some time creating your own rider, male or female, and customise their appearance and gear, before you guide them through their career. This is where you’ll probably spend most of your time, as you work your way up from the 250SX class and into the 450SX class. It’s fairly basic, as you bounce from event to event, but it always keeps things moving along as you attempt to fulfill the objective of the current season’s contract. Every now and again, you’ll be given the option of taking part in an exhibition race on one of the Compound tracks, which just helps to give you a break from the intensity of competition races. Racing is where Monster Energy Supercross 3 shines, now that Milestone has got the handling just right. Played using an Xbox One controller, both 250- and 450-class bikes almost always feel entirely within your control. They lean nicely into corners, with braking and accelerating responding smoothly, allowing you to corner as easily or as aggressively as your riding style requires. You can use the right stick to shift your rider’s weight on the bike, as you aim to ride the undulating waves of jumps, bumps and whoops of each track, and you really cannot take this for granted. How you position your rider is just as important as how you position your bike, and can be the deciding factor in the outcome of a race. Supercross racing can be unforgiving, as a shoddy landing on the first in a long series of jumps, can slow you right down as you clip every following bump at the wrong angle. It’s painful to watch and is very difficult to correct.

That’s where the rewind feature comes in handy. A tap of the shoulder button will begin winding back time a short way, allowing you another chance at that jump. Or whatever mistake you might have made, possibly separating your poor rider from their bike. On a few occasions, I misjudged a corner or a jump and the rewind ability saved my skin, but if you’re the type of player that prefers a full simulation, you can switch off this function and leave yourself at the mercy of your own talent. Or luck.

Sometimes bad luck comes in the form of erratic AI. Though much rarer than the rather poor Switch version of the game, the AI does shunt you around at times. During the drag race off the starting blocks, things can get a little crowded and chaotic, leading to a lot of pushing and shoving as the elbows come out. Not everyone makes it through the opening bend in one piece, but that also highlights how realistically unpredictable races can be. The AI has its issues, but often it means your opponents are just as prone to mistakes as you, which is something I really do appreciate in any racer. Perhaps you fancy a break from all this racing intensity? That’s where the Compound comes in. You can organise races if you want, on various predetermined tracks within the open environment, but it’s nice to just ride around without restriction for a while. There are obstacles and jumps, dirt roads and quarries for you to ride around as aggressively or calmly as you like, but it’s light on things to do. It’s a nice distraction and good for a quick, chilled-out ride, but otherwise it can feel quite empty.

Emptiness is not something to worry about in the arenas, however. There’s a good amount of detail packed into each officially-licensed arena from the AMA Supercross calendar, with some impressive lighting, especially when it rains. The actual riders’ faces aren’t that great, but astride their bikes with their helmets on, it’s nice to see their shirts billowing in the wind and mud splattering all over them and their bikes. It’s a decent visual spectacle, with plenty of realism to match its exciting races.

With its handling down, Milestone has built a game that Supercross fans will really enjoy, and honestly, those unfamiliar with the sport can still enjoy a fun and intense dirt bike racing experience in Monster Energy Supercross 3.

While far from perfect, Monster Energy Supercross 3 is an exciting slice of dirt bike racing fun, packed with content.